A RADICAL EXPERIMENT IN FINANCIAL VACCINATION 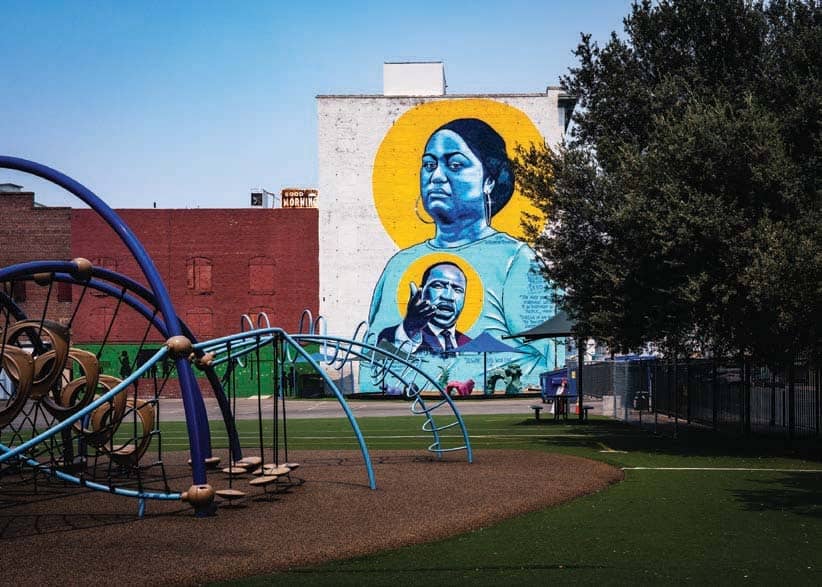 In the summer of 2017, Tomas Vargas Jr. had a wife and two young children at home in Stockton, Calif., and a teenage son he hadn’t seen in a decade. He had a $31,000-a-year position at UPS, side jobs repairing cars and carrying groceries, friends killed by gunfire, and night terrors. He was 33 years old. “In the morning, I would look dead in the mirror and tell myself, ‘I know you hate it. I know you don’t want to keep going. But what gives you the right to just be a piece of shit like that?’ And after I looked at myself deeply in my eyes, I’d sit there and tell myself, ‘Wash your face and get started and try.’ ”

One day that autumn, Vargas heard Michael Tubbs, the new mayor of Stockton, on television talking about giving away cash to his constituents, nearly a quarter of whom live below the poverty line. Vargas just laughed. Another year of work and dread followed. Then a postcard arrived in the mail, one of 4,200 sent to randomly selected residents of neighborhoods with a median annual income below the city’s figure of $46,000. It included a request to complete an online survey of 100 questions covering such things as stress levels and the use of check-cashing services. Vargas answered them all. In January 2019 he was informed that he was one of about 125 people randomly chosen to receive a guaranteed income of $500 a month for 18 months. He’d be part of the Stockton Economic Empowerment Demonstration.

Vargas figured it had to be a con. But he went down to the SEED office near city hall, where Sukhi Samra, the program’s director, assured him it wasn’t. He would receive the money on a SEED debit card and could spend it however he chose. Researchers would record everyone’s anonymized expenditures, which would then be published on the program’s website for anyone to see. A control group of 200 people were also being studied, receiving small payments in exchange for answering questions about their financial wellbeing. “Damn, it’s a pretty good scam if it is,” Vargas thought. He signed up, and in mid-February $500 appeared on the debit card he’d received, as promised.

The idea of the government giving people money directly has been cycling in and out of favor in America for more than 200 years. It’s the essence of Social Security and the annual dividend paid to Alaska residents, and it was gaining adherents again in 2016 when Stockton elected Tubbs as its first Black mayor. He was 26, born on the city’s south side to a teenage mother and an incarcerated father, and educated at Stanford. A cousin’s murder had drawn him back home. He’d served a term on the city council before winning 71% of the mayoral vote. One of his priorities was finding ways to alleviate Stockton’s deep poverty and economic inequality, which saw White families earn twice as much as Black families on average.

That same year, Chris Hughes, a co-founder of Facebook Inc., had helped start an organization called the Economic Security Project. Among its policy prescriptions is a guaranteed basic income, driven by the belief that today’s economy is fundamentally unjust and frequently precarious. A guaranteed income wouldn’t have to be enough to live on. It wouldn’t fix every problem. But it could, the group hoped, make recipients less vulnerable. They were looking for a community to try out the concept and show that people could be trusted to spend money that came without restrictions.

By 2019 there was funding for the pilot, there were researchers and recipients, there were even three murals in downtown Stockton inspired by the idea. This year, the coronavirus pandemic brought hardship on a scale that both tested the experiment’s limits and made it more urgent.

As a candidate to be the first U.S. city in a generation to experiment with a basic income, Stockton made a lot of sense. A modestly sized metropolis of some 300,000, situated along the San Joaquin River in California’s Central Valley, it was founded during the gold rush, named after a commodore, and long ago became one of the country’s most diverse cities. But diversity hasn’t meant equality. The Crosstown Freeway divides the largely White and more prosperous north from the predominantly Hispanic, Asian, and Black south, where redlining, underinvestment, and aggressive policing have caused lasting harm. Life expectancy to the south is eight years lower, and the temperature is three degrees hotter. In 2007 no urban center had a higher rate of foreclosures than Stockton; five years later it became the first major U.S. city to declare bankruptcy.

When Tubbs took office, Stockton’s finances were still constrained. Its poverty rate was twice the national average. At the time, labor experts, Silicon Valley executives, and soonto-be presidential candidate Andrew Yang were pushing universal basic income as a way to address the expected job loss from increased automation. Tubbs came at it from a different angle. “I didn’t learn this from the tech bros,” he says. He knew that Martin Luther King Jr. had advocated for some form of basic income in the last year of his life. “In a country with so much, where JeffBezos can make $13 billion a day, 35 million people shouldn’t be hungry. That seems like such a noncontroversial take.”

Tubbs is speaking from his second-floor office at City Hall. Painted on the walls are Isaiah 1:17 (“Learn to do right; seek justice”) and a lyric from the rapper J. Cole (“Dream like you never seen obstacles”). Tubbs is sporting a blue mask flecked with white polka dots. He’s got an hour.

In 2017, during his first months as mayor, Tubbs met Natalie Foster, co-chair of the Economic Security Project, at a tech conference in San Francisco. When he learned she was seeking a city for a basic income pilot, he pitched Stockton. Foster was intrigued, but Hughes had to be convinced, and so did other potential funders. “It was, ‘I’ve never heard of Stockton. He’s only been mayor for a year. There’s a bunch of mayors and a bunch of cities with a lot more cachet,’ ” Tubbs says.