Banks In Thrissur & Malappuram Not Badly Affected By Kerala Floods 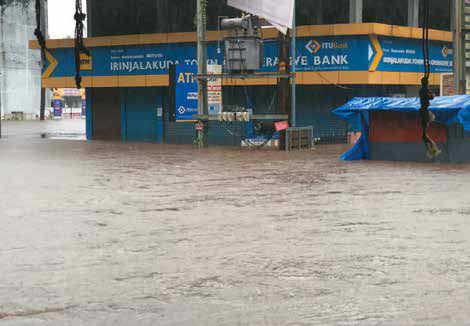 Banking Frontiers looked at the recent impact of floods in Kerala in the operations of banks in 2 districts – Thrissur and Malappuram:

The recent floods in Kerala have been quite devastating, causing considerable amount of damage to both life and property. While the exact magnitude of the losses is not fully known, indications are that it would run into billions of rupees. Thrissur and Malappuram have been two of the districts in the state that were badly affected and bankers from these two districts say banking operations have been impacted very badly.

T.K. Dileepkumar, general manager, Irinjalakuda Town Urban Cooperative Bank (ITU Bank) in Thrissur district, says the incessant rains and consequent flooding did prevent the staff from attending office for 2 days and consequently all operations in the branches and head office had to be suspended. Two of its 19 branches – Annamanada and Kattoor – could not function as they were flooded. Also, 2 of the bank’s ATMs got submerged in flood waters and became dysfunctional. He adds that at present, things are better and returning to normal with all the branches functioning normally.

Dileepkumar maintains that the floods have impacted all the major sectors – agriculture and allied activities, retail trade, including consumer loans for vehicles and small industries – and fresh disbursals have been affected as the borrowers could not come to the branches. However, he is confident there could be a spurt in the demand for funding in the immediate future as there will be need for assistance to build destroyed homes and purchase household appliances. Many of the bank’s borrowers have lost heavily in the floods. While the bank has not fully calculated the damage, he feels the losses could be around `7 million. However, most of the loans are insured and the borrowers could receive compensation from the insurance companies.

Dileepkumar feels re-scheduling of debts is one way of mitigating the sufferings of the flood-affected borrowers, but loans granted to BPL (Below Poverty Line) borrowers could get stuck and, perhaps, have to be written off. Repayment schedules of all the other loans could be extended and recovery can be expected.