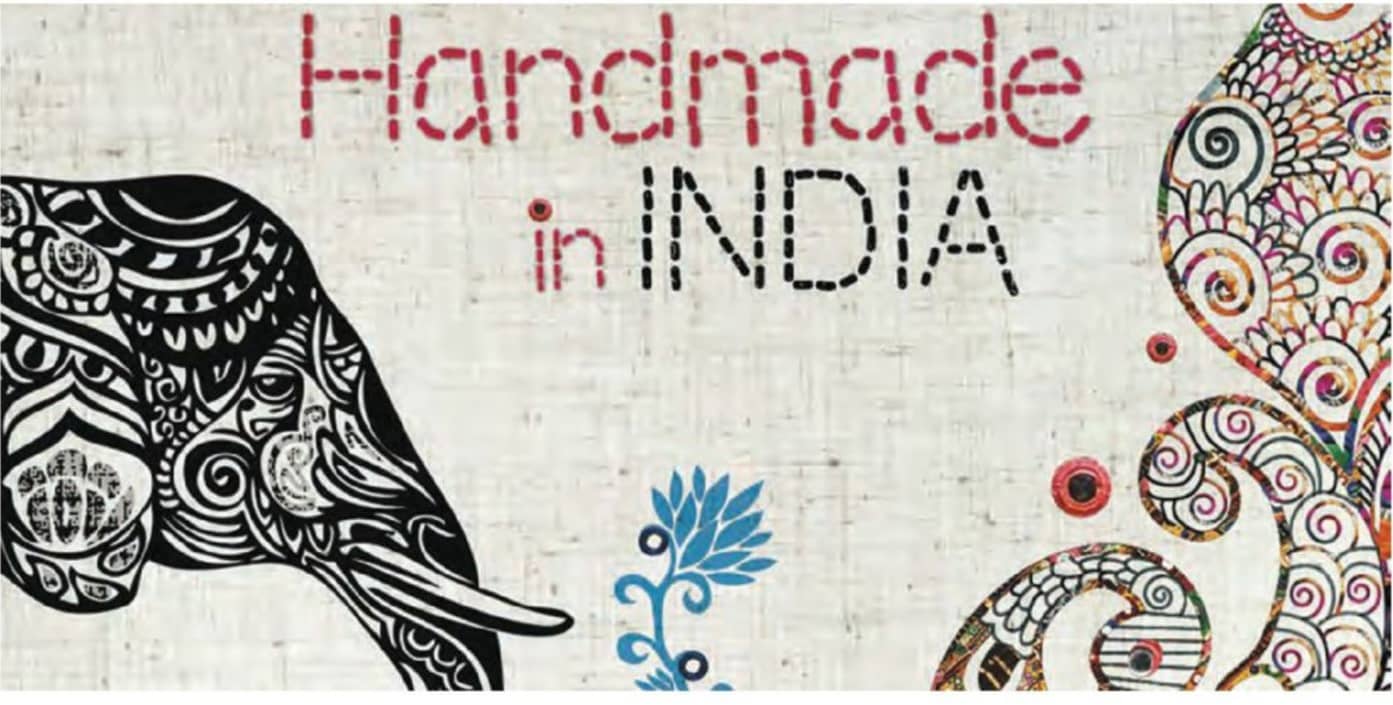 When we talk of handicrafts, a beautiful image comes to our mind; an image full of artistic complexion, creative delicacy and beautiful appearance. Handicrafts mirror the cultural identity of the people who make it.

Today, the handicraft industry has become a big economic agent in transforming the lives of millions across the country. Industrialization plays a vital role in the development process of an economy by transforming its growth linkages from agriculture to manufacturing. The handloom and handicraft sector is considered as one of the important sectors to generate gainful economic activities in rural areas.

The handloom and handicraft sector comprises of rural micro-enterprises and is family-oriented in its operations. It is a labour intensive and can be established with a relatively lesser amount of capital and is suitable for the rural masses.

Handicrafts’ impact on the overall economy

The handicraft industry provides employment to a vast segment of craft persons in rural and semi-urban areas and generates substantial foreign exchange for the country while preserving its cultural heritage. Handicrafts have a great potential, as they hold the key to sustaining not only the existing set of millions of artisans spread over the length and breadth of the country, but also for the increasingly large number of new entrants in the crafts segment.

Backed by promotional and developmental activities by the government, the handicraft sector has grown steadily over the years. According to the Ministry of Textiles, the aggregate output of the sector has increased over 40% in the past five years from ₹36,275 crore in 2013-14 to ₹49,475 crore in 2018- 19. The sector is estimated to employ 68.86 lakh artisans at present.

But the sector has not only grown steadily over the past years to contribute more and more to GDP growth, it has turned out to be a big foreign exchange earner; something the country wants badly to cut its ever-increasing current account deficit. The Indian economy has changed appreciably ever since it opened doors to the multinationals in 1991.

The growing opportunity for handicrafts in the global market is observed when it is seen that Indian handicrafts export increased three times in five years from ₹387 crore in 1986- 87 to ₹1,065 crore in 1991-92. Another plus factor was the growth in international tourist arrivals in the post-liberalization era that raised the demand for India’s traditional and cultural handicrafts.

Globalization involves changes in economic structure, relative prices, consumption possibilities and pattern, which in turn affects the growth of the sector. The handicraft industry is confronting challenges due to the intervention of new technology and also increased competition from different countries and especially, from machine-made products. As a result, India is failing to raise its share in the global market; which has remained at around 2% for a long time.

The Indian handicrafts’ share in the global market is still very low but the scope for raising exports is enormous since the global market itself is increasing rapidly. According to IMARC group, a worldwide adviser on market research and management strategy, the world handicraft market would be worth $ 1091.2 billion by 2024, expanding at 11%, annually compounded, during 2019-2024. In last five years, between 2013-14 and 2018-19, Indian exports of handicrafts have increased by more than 40% from ₹26,212 crore to ₹36,798 crore. What is significant is that about three-fourths of the production of handicrafts is exported.

Indian handicrafts are exported to more than hundred countries. The US alone accounts for about a third of India’s handicrafts’ exports. However, Indian products are now facing challenges of price competitiveness from other countries like China which have mixed craft with the latest technology and India is still to introduce such innovative technologies in the handicraft sector.

The challenges of price competitiveness in the global market apart, the Indian handicraft sector is suffering from a number of inherent and indigenous problems. The handicraft artisans suffer due to the sector’s unorganized nature, lack of education, low capital, poor exposure to new technologies, absence of market intelligence and a poor institutional framework.

Fragmented value chains and lack of market linkages is probably the main problem of the sector. While consumers of craft products are increasingly becoming urbanised, crafts continue to be sold through local markets; artisans have few opportunities to reach new consumers through relevant retail platforms such as departmental stores and shopping malls or through online portals. As a result, the middlemen remain the primary source of market linkages. If not always, the middlemen continue to exploit artisans by paying only a fraction of the sale proceeds to them.

Lack of quality raw materials is another problem. Due to the low volumes required, handicraft producers have low bargaining power and are often forced to buy sub-standard materials at a higher price. In crafts such as weaving, handloom weavers have to compete with the power loom industry for high quality raw materials.

Craft producers suffer greatly from lack of working capital and access to credit and loan facilities. Banks cite poor recovery rates, wrong utilization of funds, lack of marketing facilities for finished products and lack of education on part of the borrowers as reasons for the low proportion of loans made to artisans. This forces artisans to borrow from their local moneylenders at high-interest rates, making their finances vulnerable.

Artisans also lack the financial capability to upgrade technology in production, or undergo necessary training on a regular basis, as would be available to them in a formal work setting. This compromises the quality of their products and raises the cost of production.

Recognizing the role of handicrafts in improving the rural economy, subsequent governments have taken various promotional measures to strengthen the structure and the base of the handicraft sector over the years.

The All-India Handicrafts Board was established way back in 1952 to identify the problems hampering the development of handicrafts. And the Handicraft and Handloom Export Corporation of India Ltd. was established for the promotion of handicraft exports. These institutions focused on promoting handicrafts, without really improving the productivity of artisans through various incentive models.

Things have, however, changed in recent years and the emphasis is being given to improve the skill of the artisans,to better the marketing network of products and to bring in new designs and structures to suit the changing consumers’ tastes.

To address these challenges and to develop and promote the sector, the government's National Handicraft Development Programme is being implemented by the Office of the Development Commissioner (Handicrafts).

It features the following components: Ambedkar Hastshilp Vikas Yojna - a subsection of this scheme, Dastkar Shashktikaran Yojna, enables community empowerment for mobilisation of artisans into self-help groups and societies. Afterward, the implementing agency prepares a diagnostic study report for proposing further interventions in the cluster. The implementing agency is responsible for overall project management and implementation of various interventions with a view to facilitate bulk production and sourcing of goods. Under the design and technology upgradation subsection, a 25-day workshop is conducted where the objective is to develop new prototypes to suit the tastes and preferences of contemporary markets, using the traditional skill of artisans and by introduction of new techniques and technologies for enhanced production. Ambedkar Hastshilp Vikas Yojna also provides support in human resource development, infrastructure and technology support, healthcare, and more.

Another is the mega cluster scheme that follows a mega cluster-based approach in scaling up infrastructural and production chains at handicrafts centres, which have remained unorganised and have not kept up with developments elsewhere. The objectives include generating employment and improving living standards for existing artisans. The mega clusters will be taken up for development through the Handicrafts Mega Cluster Mission (HMCM) or through central/state corporations as and when announced in the Union Budget, or as per requirements, and as per the diagnostic report prepared.

The programme also includes marketing support and services scheme, which provides interventions for domestic marketing events to artisans, such as providing financial assistance for organising or participating in marketing events in India. Assistance is also provided for hiring built-up space in events organised by other institutions. Besides this, craft awareness and demonstration programmes are also conducted. Financial assistance is provided for organising or participating in marketing events abroad, market studies, craft exposure programmes, cultural exchange programmes, etc. The marketing and support services component helps to conduct domestic buyer-seller meets which provide linkages to local artisans to showcase their products to major buyers.

The research and development scheme aims at generating feedback on economic, social, aesthetic, and promotional aspects of various crafts and artisans in the sector. Surveys and studies are conducted on specific crafts on which enough information is not easily available, on problems related to availability of raw materials and on the requirements of technological upgradation.

The government is trying to sort out the problems of the handicraft sector. But one has to wait to see whether intentions actually meet reality or not.

There is a common link between the Taj Mahal, the Ajanta-Ellora caves, the Sanchi Stupa, the famous temples of south India, the terracotta pots, the exquisitely designed cane furniture, phulkari textiles, and jute jewellery. All these are manifestations of skilled Indian craftsmanship. Through monuments and antique souvenirs, India has managed to preserve the country's diverse culture and heritage and has earned a global appreciation for its unique craftsmanship.

The rich and exotic appeal of high-quality handicraft goods produced by communities across India has not only successfully attracted demand from the domestic market but also from the global market, making India the world’s major exporter and supplier of handicrafts. According to India Brand Equity Foundation (IBEF), with more than seven million regional artisans and more than 67,000 exporters/export houses promoting regional art and craftsmanship in the domestic and global markets, the Indian handicrafts industry is highly fragmented.

In an interview with BE in 2018, O. P. Prahladka, Chairman, Export Promotion Council of Handicrafts (EPCH) said that the products that have good export viability include art metal ware, wood ware, hand-printed textile and scarves, embroidered and crocheted items, shawls, zari products, imitation jewellery, incense sticks and perfumes (attar) among others.

According to the Annual Report 2018-19, Ministry of Textiles, Government of India, “India’s textile and clothing products including handlooms and handicrafts are exported to more than hundred countries. However, USA and EU account for nearly half of these exports.” Market insiders say that the other major destinations include the UAE, Bangladesh, China, Sri Lanka, Turkey, Pakistan, Saudi Arabia, Canada, Brazil, Australia, Republic of Korea, Hong Kong and Egypt.

Prakash Shah, Chairman, Trade Promotion and Business Development Committee, Bengal Chamber of Commerce and Industry (BCC&I), told BE, “When we organise the Export Promotion Council for Handicrafts (EPCH) fair in Delhi, almost 10,000 foreigners fly in every year to attend this fair. There are 5000 stalls from all over India, showcasing the best of Indian craftsmanship. The response of this fair shows the demand for Indian handicrafts abroad.”