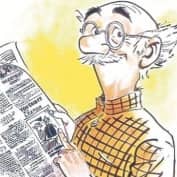 Bang in the middle of one of Jaipur's busiest arterial streets, the Sansar Chandra Road, is a modest office cradled on to the corner of a threestorey building.

The entryway, covered up with an array of notices, was sealed shut. The office itself is devoid of activity, but outside a small group had gathered after a protest in front of the city's Securities and Exchange Board of India branch.

Sanjay Singh, 45, from Dausa and Madan Singh Yadav from Udaipur, both small-time investors, had showed up to see if anybody could tell them anything about their now-lost Rs 15 lakh. Once upon a time, the office belonged to Pearl Agrotech Corp. Ltd (PACL), a credit cooperative society. Now, the only remaining evidence of its existence is in the form of a few nameplates, in the stairwell or next to the elevator.

The PACL scam amounting to an estimated Rs 49,100 crore considered to be one of the biggest chit-fund scams in the country affecting nearly 56 million investors-hides a larger tale about a silent transformation that has been underway in Rajasthan.

Hints about that hidden tale tumbled out a few weeks ago when the National Crime Records Bureau (NCRB) released its long-delayed 2017 report documenting the nature of crimes across the country. Surprisingly, the rate of economic crimes (cases per 100,000 people) in Rajasthan's capital city, Jaipur, topped even Delhi and Mumbai.

Despite having only one-sixth of the population of Mumbai, the pink city recorded almost as many cases of economic offences as the country's financial capital (about 4,400 or 12 cases a day). In 2017, Rajasthan?also accounted for the highest share of economic crimes (cases of forgery, cheating and fraud) in the country, pushing the more populous Uttar Pradesh to second place.

How and why did Jaipur become the country's economic crime capital? And what does it say about the nature of economic transformation that is currently underway in India's emerging cities?

In Jaipur, men like Singh, the farmer from Dausa, have been wondering why there haven't been many street protests despite a recent spate of chit-fund scams in the desert state. "Maybe the people who have invested in these chit-funds are moneyed and from the upper-middle-class.? Probably, the money lost is something they can deal with," says Singh.

The tentative government estimate of investor losses is upwards of Rs 1,000 crore. But nobody knows for certain yet. Beyond the sums of money involved, however, lies a simple question: why is this happening in Rajasthan and why now?

Chit-fund scams and Ponzi schemes are of course nothing new to India. Despite strident efforts to turn more Indians into bank account holders, over half of the respondents in the most recent government-backed financial inclusion survey said they prefer to keep their savings at home. Combine that with poor financial literacy (only 11% had "good" financial literacy, according to the National Bank for Agriculture and Rural Development survey) and it creates a potent mix. Scams have inevitably rippled through every part of the country from southern Tamil Nadu to West Bengal, where the Saradha scam exploded into a political scandal in 2013.

Due to its proximity to several economic corridors, in Rajasthan, the credit bubble was inevitably linked to land, at least initially. PACL's business model, for example, was to buy tracts of agricultural land using investor funds and hope for a swift appreciation in value. It worked well as long as land prices soared. And then came demonetization.

The widely-held perception in Jaipur's business community is that once the real estate-fuelled economic growth bubble went bust around 2016-17, people who used to invest in land began to park surplus money in credit cooperative societies, which promised roughly the same returns that land speculation used to. Here, the Rajasthanis' innate ability to take risks came into play.