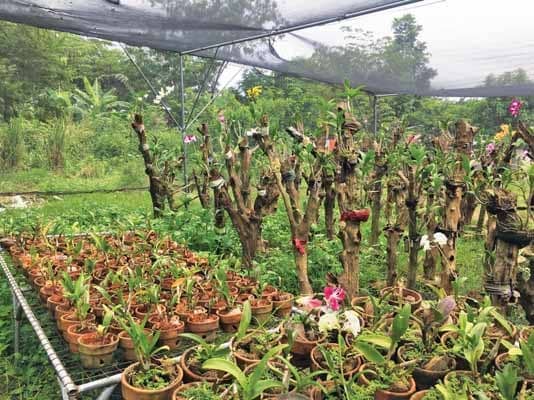 PLANTING CROPS and raising livestock and their products aren’t the only ways to make money in agriculture. For a Gawad Kalinga (GK) Federal Land community in Pililia Rizal, cultivating orchids are a good way to make a living.

The community, which is the first in Luzon to have a foodshed, also has an orchidarium to supplement its members’ income. The orchidariuman area covered with garden netting-along with the gazebo beside it, was built bayanihan style by the community members and some French volunteers, says the orchidarium’s project manager, 34year-old Joy Cueto, whose husband is a tricycle driver. The wood used to grow the flowers were donated by the mayor.

Cueto, who has three girls and two boys and at the time of the interview was pregnant with twins, narrates that they started with 300 orchids in pots, transplanting about 50 pots after the first two weeks, and continuously after that. “We were able to make a profit after only one month,” she says in Tagalog.

The orchids in pots are sold for R250 each, while those attached to wood are sold for R300. “At first, we wanted to sell them at the market but we couldn’t match their low prices,” Cueto says.

Since most people prefer to buy orchids attached to wood, they tend to accumulate the pots the orchids are grown in. When it’s time to buy a new batch, these pots are brought to their orchid supplier and reused to contain the new batch of orchids. They also buy new planting containers from their orchid supplier, as these cost less than if they bought them in the market.