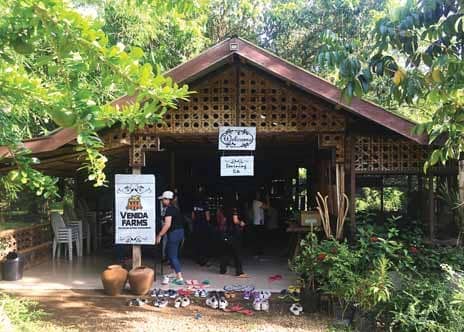 Venida Farms, located within the Iligan City limits, is technically an urban farm, though it’s easy to forget that once you’re inside. The farm is just a few minutes drive from the city center. You’ll know that you’ve reached Venida Farms by the calabash trees (Crescentia cujete) outside. Also called ‘miracle fruit,’ calabash has many health benefits, including phytochemicals that may contribute to decrease in blood sugar levels. It is also currently being studied for its potential anticancer properties.

These, as well as coconut trees and orchids growing from coconut husks, line a grassy path that leads towards a sturdy wooden hut on which the signs, ‘Venida Farms,’ ‘Welcome,’ and ‘Learning Site’ are hung.

The farm is owned by Roger Lacida, who named it after his mother’s nickname. “Her name is Bienvenida, which means ‘welcome.’ She really had a passion (for farming). Since we were little, she’s the one that injected this ‘disease’ into us, the passion for plants and livestock,” he says.

Lacida has always had a green thumb. He recounts that around the age of five, he was given a small plot of land to care for, where he planted calamansi. “That’s how it all started,” he says. “But our house was full of livestock and plants because we were (one of) the first settlers in the province.”

Lacida and his three siblings grew up on the three-plus hectares that comprises the farm and the family residence. He was entrusted with the farm in 1984. Ten years later, he returned to survey the area and plant coconut and fruit trees. He didn’t start farming in earnest until 2009, when he retired from his businesses in the real estate and hotel and restaurant industries in the U.S.A. to return home to look after his widowed father who lived on the farm. 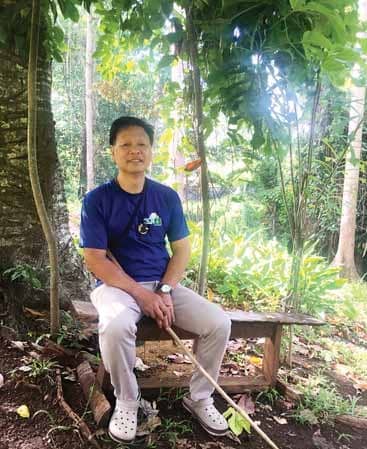 When he arrived, he was in for a nasty shock. Only a fourth of the trees planted in 1994 were left; the rest were cut down by the property’s caretakers who mistook unfamiliar trees like lychee as weeds. “I started to rehabilitate the farm,” he says. “I added a lot of livestock, different fruit trees like cranberry and bignay, and a lot of indigenous plants.”

Even though he had an interest in farming, Lacida didn’t have a background in agriculture. He made up for this by attending training seminars in the Department of Agriculture’s Agricultural Training Institute (ATI) and subscribing to Agriculture magazine. “I read it religiously. I absorbed it and practiced it and applied (what I read), because I didn’t have knowledge of farming. I didn’t go to any university for agriculture. I just learned it from magazines and training.”