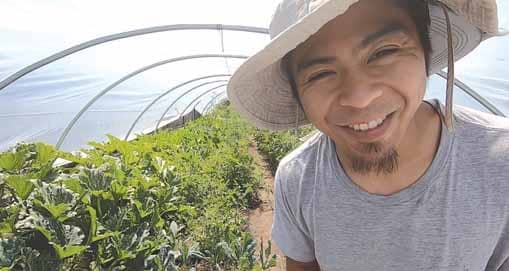 THE PHILIPPINES may be an agricultural country, but farming isn’t the industry one expects Filipinos who’ve grown up overseas to get into. Roderick Camarce, 36, is a Filipino American who is changing that notion.

Camarce was born in Bremerton, Washington in the USA. His dad is from Cavite while his mom hails from Bulacan. “I’m Tagalog,” he says proudly.

He started Ridgetop Urban Farms in 2017 in the backyard of one of his parents’ rental properties. “It has a history of being a farm in the early 70s,” he says.

Part of his interest in agriculture came from having lived in the Philippines for four years as a musician, playing for acts such as Ely Buendia, Jess Conelly, Kat Agarrado, and Ourselves the Elves. Before that, he worked full time in the corporate world in the USA. “I went back to the States and I was trying to figure out what I wanted to do and I didn’t want to work in the corporate world anymore. I did that for five years. I just didn’t want to live that lifestyle again,” he says.

Camarce belongs to America’s hustle culture, what Filipinos know as ‘diskarte,’ something that he says got from his dad. “My dad comes from a not-so-wealthy background but he was one of those stories where he really came up from the American dream. He’s just full of diskarte and that’s where I come from,” Camarce says. “What got me into farming is I always go against what’s going on. It’s kind of uncommon to be a farmer today... I saw an opportunity and now I’m... trying to go for it.”

The backyard his farm is located on measures 6000 sqft (557.41 sqm). He researched on SPIN (Small Plot INtensive) farming, a natural farming system developed by Canadian Wally Satzewich that aims to produce high crop yield in a small space and is currently using its principles to grow food.

Camarce started planting on 800 sq ft (74.32 sqm) because “because I just wanted to start and I wanted to see if people would actually buy it.” The first vegetables he grew were salad greens— arugula, red Russian kale, spinach, lettuces—and edible flowers. Soon, he was planting on 2000 sqft (185.8 sqm) and this year, he’s started using all 6000 sqft.

FROM GARDEN TO URBAN FARM

Part of Ridgetop’s journey involved transforming a grass lawn into a farm. Camarce started by taking out the grass that originally sprawled the backyard, then tilled it. “I’m [on] a no-till system right now but I started tilling that 800 sq.ft because I just wanted production fast,” he says, adding that this was before he learned “about soil building and keeping carbon inside the soil.”

He added amendments like finished compost, pelletized chicken manure, feather meal, and bone meal, all of which he tilled in. “I broad forked so I can aerate the soil without tilling more,” he adds. “Broadforking is [using] a fork, you dig deep into the soil but instead of inverting it, you’re aerating it. It’s like using a tiller without turning over the soil so you’re not disturbing the soil structure….”