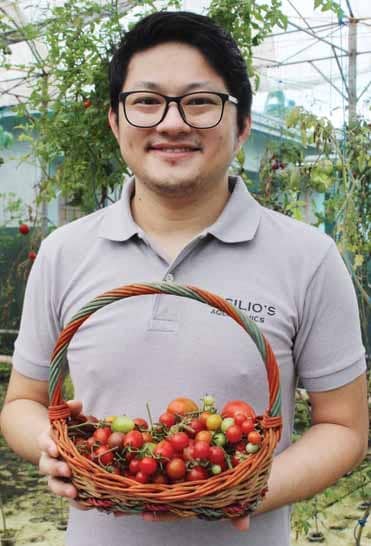 WHAT USED TO BE a test farm for a few microgreens proved to be a self-sustaining enterprise for Franz Chung, 32, a Communications Technology Management graduate from Ateneo de Manila University.

Frustrated with having to buy packs of expensive fresh basil, thyme, and other herb essentials just to use a little amount for cooking, Chung turned to the Internet to look for alternatives.

Chancing upon the benefits of aquaponic farming that has become popular especially for those with limited space, Chung first tried out the system in his home’s balcony in Quezon City. Proving its efficiency in growing safe and naturally-grown vegetables in just a short span of time, Chung, in turn, thought of converting his and his partner’s idle lot located in Lumia, Silang, Cavite into an aquaponics farm. Through continuous online readings and with the aid of his family’s workers (the family is into the construction business), Chung started by constructing fish tanks and the necessary implements for an aquaponics farm.

HOW THE CYCLE WORKS

Aquaponics is a sustainable farming system that combines aquaculture (fish farming) and hydroponics (soilless plant farming) in one integrated environment. As it is soilless, its produce is free of pesticides and fertilizers. It utilizes fish wastes that are converted into food for the plants, and the plants naturally filter the water for the fish. There is a water and plant component during the process.

“The cycle starts by feeding the fish,” says Chung. Basilio’s maintains three 9-cubic meter tanks with 5,000 to 7,000 red tilapia each. They started with fish fry, which they incubated for three to four months.

“There is a constant water flow [because] when the fish [defecate], the water is automatically brought to the filter. The swirl filter and the mechanical filter break down the tilapia feces, and then from ammonia, it turns into nitrates, as well as into other nutrients such as phosphorus and potassium which are the elements needed for plant growth. Then the water flows into the plant’s growing area or grow beds, thereby utilizing fish wastes as the plant’s fertilizer. After the plants utilize the nutrients, the water that flows from the grow beds comes back to the sub tanks, which are already filtered and is safe to use by the fish for its water requirement afterward,” explains Chung.

In one corner of Basilio’s Aquaponics Farm is a miniature tank where they grow pangasius and which also repeats the cycle of aquaponic farming.

“There is no need to replace the water constantly, I just refill them from time to time, making the system sustainable,” adds Chung. All in all, an estimated 16,000 gallons of water is being utilized for the whole system.

“We use about 80 to 90 percent less water than traditional farming since we don’t have to deal with evaporation much – the only water we use is the amount consumed by the plants,” says Chung.

To avoid the chlorine present from the water provided by water concessionaires, Basilio’s has its own pump, which sources water from a river nearby. “We have a constant source of water that is chemical-free,” assures Chung.

“Since our system is soilless, we pay close attention to the quality of water. We specifically check for pH level, water temperature, water level, nitrites and nitrates, and trace minerals. This is to make sure that our plants are getting the optimal amount of nutrients and our fish are swimming around healthy water,” continues Chung.

Prior to the recent Taal Volcano eruption which brought in large amounts of ash to many parts of the Southern Tagalog region, Basilio’s uses the naturally-occurring moss or duckweed and grows Azolla as natural feed for tilapia. However, due to the chemicals that might be present in the ash that had accumulated around the farm, Basilio’s chose to source their fish feeds in the meantime from one of their friends who mills food scraps into fish feeds, maintaining a natural feed for the fish.

Right now, Basilio’s is also planning to experiment on freshwater Bangus and catfish, that is why they are emptying one of the tanks after their recent tilapia harvest.