A FERN AND LYCOPHYTE EXPERT DISCOVERED AN ENDEMIC PITCHER PLANT 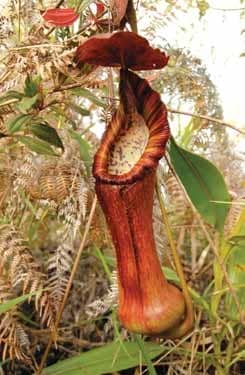 FERNS (Polypodiopsida or Polypodiophyta) are non-flowering vascular plants that have true roots, stems, and complex leaves. Another difference that it has from flowering plants is that it doesn’t reproduce through seeds but rather through spores.

In the country, there are around 900 species of ferns out of the 9,000 that are listed globally. The increase on the list of such plants belongs to the effort of a botanist who hails from Mindanao.

Known as “Mindanao’s first academician,” Dr. Victor Amoroso is known for his outstanding scientific works on the morphology and taxonomy of ferns and fern-allies in Mindanao. His research led to a significant development of economic ferns and lycophytes in the Philippines and has elevated him to the status of the country’s lead fern and lycophyte expert.

Aside from naming different species of ferns and lycophytes in the country, Dr. Amoroso’s research also revolved around the plants’ potential as functional foods, sources of nutraceuticals, and medicine.

He also established the Herbarium of Central Mindanao which is a depository of endemic, threatened, and economic plant species found in the region. The Herbarium is also globally recognized by the Index Herbarium and Fern Spore Bank.

Ferns aren’t the only flora species that Dr. Amoroso is known for. In August 2011, he discovered a new species of pitcher plant that is endemic to Mindanao.

Pitcher plants, also known as pitfall traps, are carnivorous plants that possess a prey-trapping mechanism which is characterized by a deep cavity filled with liquid. Foraging, flying or crawling insects such as flies are attracted to the cavity of the plant due to its visual lures like anthocyanin pigments or even nectar bribes.