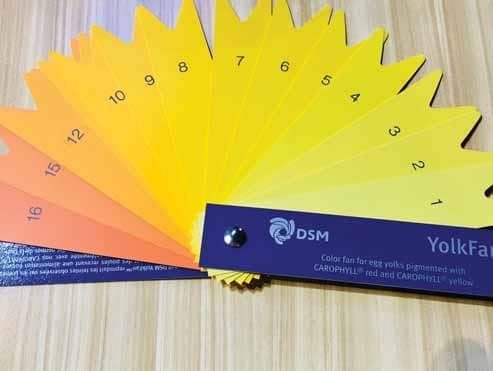 EGG YOLKS come in different shades, ranging from pale yellow to deep orange. Darker egg yolks may mean that the chicken that laid is healthy. When chickens are healthy, the eggs they produce are also healthy. Several studies have shown that chickens that have access to outdoor pasture, as well as insects like worms produce darker egg yolks that contain greater nutritional value. In a study by Cambridge University, higher levels of vitamins A and E are observed in pasture-raised chickens compared to chickens in cages or chickens who don’t have access to any grass that adds nutrients to their diet. There are also cases of growers of caged chicken putting natural additives like marigold flowers in chicken feed to enhance egg yolk color. However, a pastureraised diet is said to produce better eggs with higher nutritional value.

Knowing the importance of egg yolk color gives one an idea of getting the better egg quality for them to get higher nutritional benefits. Therefore, it is important to have a tool that elevates market knowledge in terms of yolk color differences.

The first color swatch fan invented to check the yolk color is called the DSM Yolk Color Fan (DSM-YCF), formerly known as Roche Yolk Colour Fan. This color measurement fan is a good tool for egg producers and health-conscious consumers. It was invented by DSM, a global company specializing in nutrition, health, and sustainability through its products and services. This fan was originally made in the early 90s and over the years, it was studied and had evolved into different versions. Just last 2016, DSM launched an extra level of a deeper color. From the last number 15, it now has the 16th yolk shade. The additional level on the YCF helps address and meet the yolk pigmentation standards of the consumers in Japan and the Middle East. Rolando Valientes, one of the veterinarians from DSM Philippines said that usually, the higher the yolk color, the higher its association with greater antioxidant capacity. He added that the darker yolk color also indicates a good health status of a chicken. DSM has conducted a study that shows consumers from different countries mainly prefer egg yolks ranging from YCF number 12 or above. Valientes added that during the surveys, they show different egg colors and ask participants which color they prefer. Answers always fall on the darker color. However, when they ask them about paying more for it, people would say no. According to Valientes, it is a matter of educating the consumers about the meaning of a darker colored yolk so people would know its importance.