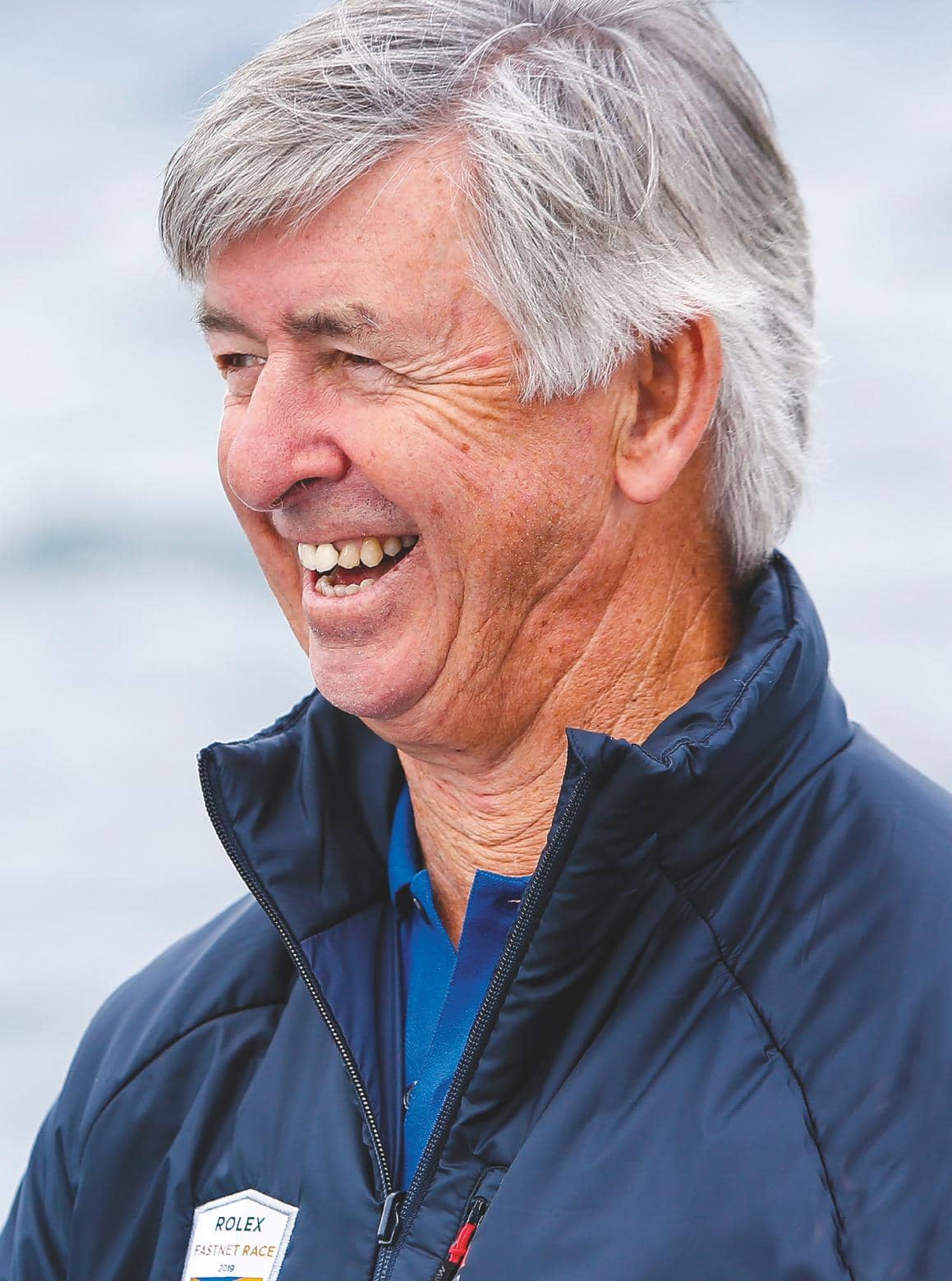 AFTER AN ENVIABLE PROFESSIONAL SAILING CAREER, EDDIE WARDEN OWEN HAS A RARE PERSPECTIVE ON THE WORLD OF RACING, AS ELAINE BUNTING HEARS

Whether at the windswept finish of the Rolex Fastnet Race, or in the wood-panelled rooms of the Royal Ocean Racing Club in London, Eddie Warden Owen is one of the most familiar faces in offshore racing. The genial and popular Welshman, who cheerily admits to being “naturally aggressive and highly competitive”, has a special purview of more than a half-century in competitive sailing and, as CEO of the RORC, has shaped participation racing in events such as the Rolex Fastnet Race and the Caribbean 600.

From a boyhood of club sailing in Holyhead in Wales, he was part of the boom in dinghy racing during the 1960s and 70s. His talent, fitness and drive took him into the British Olympic team, then on to race J/24s, big boats and the Admiral’s Cup, before he was propelled towards the international match racing circuit and three successive America’s Cups.

Warden Owen’s generation was the first to make a living entirely from professional yachting. Today, as CEO of the RORC, he helps to shape participating in the sport through the club’s international racing calendar.

As a teenager, Warden Owen was sports mad. His father, a carpenter and shipwright, was one of the founding members of the Holyhead Sailing Club, where members had built and raced a fleet of GP14s. Young Eddie, and his elder brother David, more or less lived at the club. David was, says Eddie generously, “the more naturally gifted. I applied myself, that’s all, and I wanted to do something with it.”

It was not until his brother David was in his early 20s and had earned enough money for a car from his job in the merchant Navy that the two began travelling to competitions. After graduating, Eddie trained as a PE teacher and began working in schools near Birkenhead. But he was already questioning his career choice after winning the Welsh Games in 1969. That victory led to him being selected the following year for a competition called the Finnfinder, in which ten sponsored Finns were raced at ten clubs round the country.

The winner of each round was then invited to the Finnfinder final in Torquay, raced at the same time as the Finn Nationals. Warden Owen won, and was presented with a brand new Finn with Boyce spars and Musto sails. In 1971, the two Warden Owen brothers entered the GP14 Nationals in Plymouth, then a hotly contested fleet. Again, Eddie won. “That led me to believe that I could do something different,” he recalls. Noting the result, the well-known yachting journalist Bob Fisher gave him some advice. “He said to me: ‘Look, you should go for the Olympics.’”

In that year, the 470 was introduced as an Olympic class, and Fisher introduced young Warden Owen to Seahorse Sails, which was looking for someone to campaign a 470 for them. So he left teaching, and swopped Wales for Suffolk to learn sailmaking.

So began an Olympic campaign for a Games that the British sailing team never got to compete in. In 1980, the US boycotted the Moscow Olympics in protest at the Soviet invasion of Afghanistan. The British government supported the boycott but left it up to individual sports associations to decide whether or not to compete. The governing bodies of equestrian sports, hockey, shooting and sailing decided not to send a team.