MIKE BROUGHTON ON SAILING IN FOG

Just a few minutes of sailing in dense fog takes most sailors well out of their comfort zones: it’s disorientating and, quite frankly, scary for many. Here are some tips on how to prepare for, and deal with, a ‘pea soup’:

At sea, fog can be summed up as condensed water vapour or just thick cloud on the surface. Sea fog, or advection fog, forms when relatively warm moist air moves over colder water and cools to its dew point temperature, causing the air to saturate.

Unlike land fog, or radiation fog, sea fog can occur at any time of day and still exist with quite strong winds. It only really clears with a change of air mass – usually with the passage of a cold front. Without the passage of a cold front, it can last for days. While radiation fog usually occurs on cold, still winter days, sea fog or advection fog is more prevalent in early summer. June can be a particularly bad month in the English Channel, when the water is still relatively cold, with warm moist air coming up from the south-west.

Looking out for the forecasts of fog is important, but one simple trick is to go online and use satellite imagery. Sat24.com is a great website to see the last three hours of visual imagery, where fog often shows as a dull, grey and featureless cloud. Next, do a quick comparison with the infra-red satellite imagery and the fog seems to miraculously disappear, whereas other clouds tops still show up. This is due to the fog being approximately the same temperature as the sea, hence giving a neat confirmation of the existence of fog on the visual picture. You can then return to the visual imagery and more accurately plot the extent of the fog and potentially take avoiding action.

If you do sail into unexpected fog, first consider whether you need to keep heading further into it? Would it make more sense to do a quick 180° turn and head back out into clearer visibility?

Once in fog, we need to work through a checklist of actions. Note your compass heading. Do we need a more experienced helmsman? It’s easy to quickly find you’re 30° or 40° off course and not notice. Steering is more exacting and even exhausting. Could it be less stressful to use the autopilot, to allow you to focus on lookout? Just be ready to immediately switch to manual if you need to at a moment’s notice. 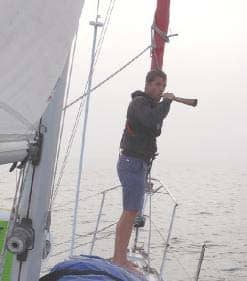