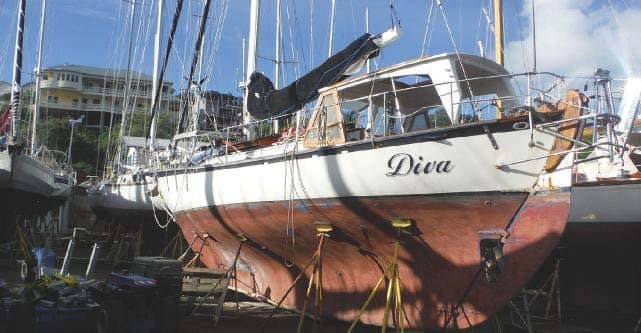 In 2017-18, sailed from New Zealand to the Antarctic Peninsula by way of Cape Horn (60 days). Spent three weeks pottering around old haunts in the Peninsula then north to the Falkland Islands to reprovision. Departed Stanley on 4 March bound up the Atlantic. Arrived Bantry, Ireland, on 8 June (96 days).”

For Trevor Robertson, a single-handed epic such as that is taken in his easy stride. His boat of over 20 years has been Iron Bark, a 35ft steel gaff cutter drawn by Nick Skeates on the lines of his own Wylo II, a boat with too many distinguished passages astern for most of us to count. With Iron Bark Trevor has racked up an impressive list of achievements, but the time comes to nearly all of us when a change is called for.

This story, taken from ‘Roving Commissions’, the journal of the Royal Cruising Club, tells of a highly experienced mariner finding a suitable replacement for his well-tested vessel. On the face of things, the yacht Trevor buys would seem a perfect long-range cruiser, but his pithy comments as he jockeys her down to the Caribbean for a major refit tell a different story. Anybody thinking about sailing off soundings will find this narrative an eye-opener.

When I launched Iron Bark in 1997 I said that I would move on to another vessel before I turned 70. In October 2018, with that birthday looming, I sailed from Ireland for the West Indies to look for her replacement. After crossing the Atlantic by the Tradewind route, I hauled Iron Bark out of the water in Carriacou to prepare her for sale.

I wanted to replace Iron Bark with a similar vessel but built of fibreglass for reduced maintenance in my dotage. I decided on an Alajuela 38, a fibreglass version of William Atkins’ Ingrid built in California in the 1970s. There were several for sale and I flew to Tampa on Florida’s west coast to look at the nearest one. Under previous owners, Diva, had covered quite a bit of water, but her sailing seems to have been entirely short hops with no ocean passages. She was fitted out to maximise comfort at anchor or in a marina with little consideration for functionality at sea and her motor had seen far more use than her sails.

She was basically sound and although much of her equipment and fittings were unsuited to ocean voyaging, I believed the surplus systems could be discarded and the missing ones added at a cost I could afford, so I bought her.

Florida marinas are expensive so I did the minimum necessary to get her seaworthy enough to sail to the Caribbean where I could transfer my tools and gear and get on turning her into an oceangoing vessel.

Diva’s hull and rig were well built but her interior had a boat show layout with too many open spaces and far too little stowage. Her sails were in good condition but intended for the light conditions of the American coast and barely adequate for an ocean voyage. The mainsail lacked a deep reef and there was no proper high-cut sea-going jib. However, with care and patience I believed I could make the passage south with the sails as they were and sort out her deficiencies in the Caribbean.

Most of the locker doors had only friction catches that would burst open in a seaway so I bought a roll of duct tape to restrain them. The galley had no bar in front of the stove or strap to hold the cook in place, there was no usable manual bilge pump, the cockpit was huge and its drains small, the non-skid was designed to be easy to clean rather than to keep the crew aboard and there was a maze of plumbing in the bilge with the potential to sink the vessel.