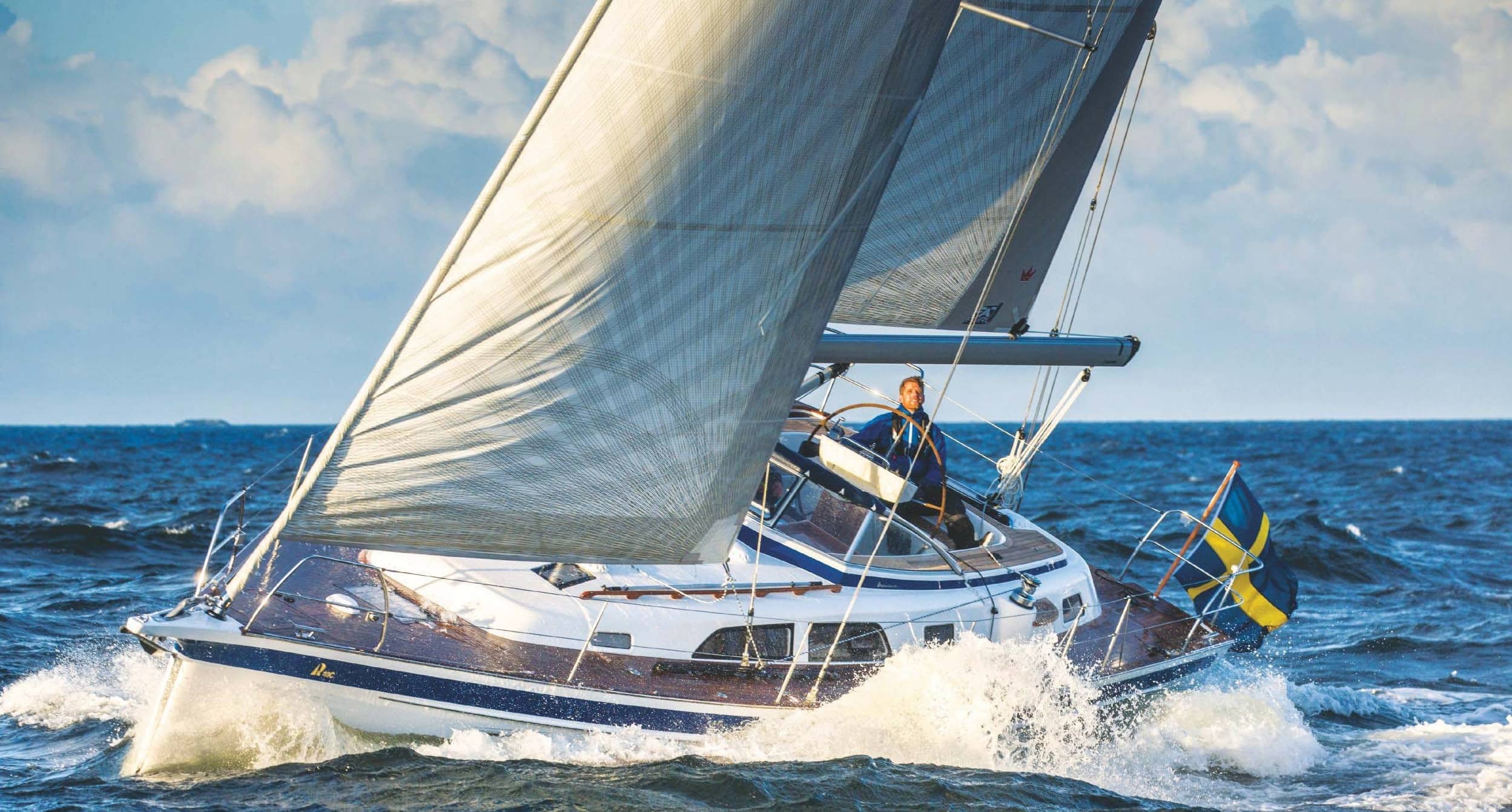 The Swedish yard is turbo-charging its range of offshore cruisers, but have they left good old-fashioned seaworthiness behind? Theo Stocker spent 48 hours sailing her to find out

Steep waves rolled in unchecked from a brutally cold Skagerrak, and the cold winter sun glistened in the spray scattering to leeward as the sharp bow sliced to windward. A Force 5 in late December on the exposed west coast of Sweden might not seem like the ideal setting for a boat test, but these are exactly the kind of conditions the Hallberg-Rassy 40C was built for.

The Swedish yard has long been a byword for high quality, long-distance cruisers; a reputation built on generations of beautifully executed and eminently seaworthy yachts that have taken sailors all over the world. Their understated styling and conservative design were a big draw for many, but the world of yacht design is changing rapidly and Magnus Rassy, the yard’s owner, was determined that Hallberg-Rassy should not become outdated. While fabulously wide transoms and twin rudders have been proliferating among racing and cruising boats alike, they are something of an anathema to traditionalists. Surely a deep hull, long keel, generous overhangs and a skeg-protected rudder are safer and more sea-kindly?

The Hallberg-Rassy 40C is their fourth boat to fly in the face of such received wisdom and Magnus Rassy insists she is the best sailing boat the yard has ever built. She is a dramatic departure from her two predecessors, the 40 and 40 MkII (the C in 40C stands variously for ‘cruising’, ‘centre-cockpit’, and the third model), while the 412 remains as the aft-cockpit option. The 40C’s modestly pretty sheerline, blue hull stripes, solid windscreen and brass rubbing strakes instantly mark her out as a Hallberg-Rassy. The vertical ends, integral bowsprit and vastly beamy transom look startlingly different. 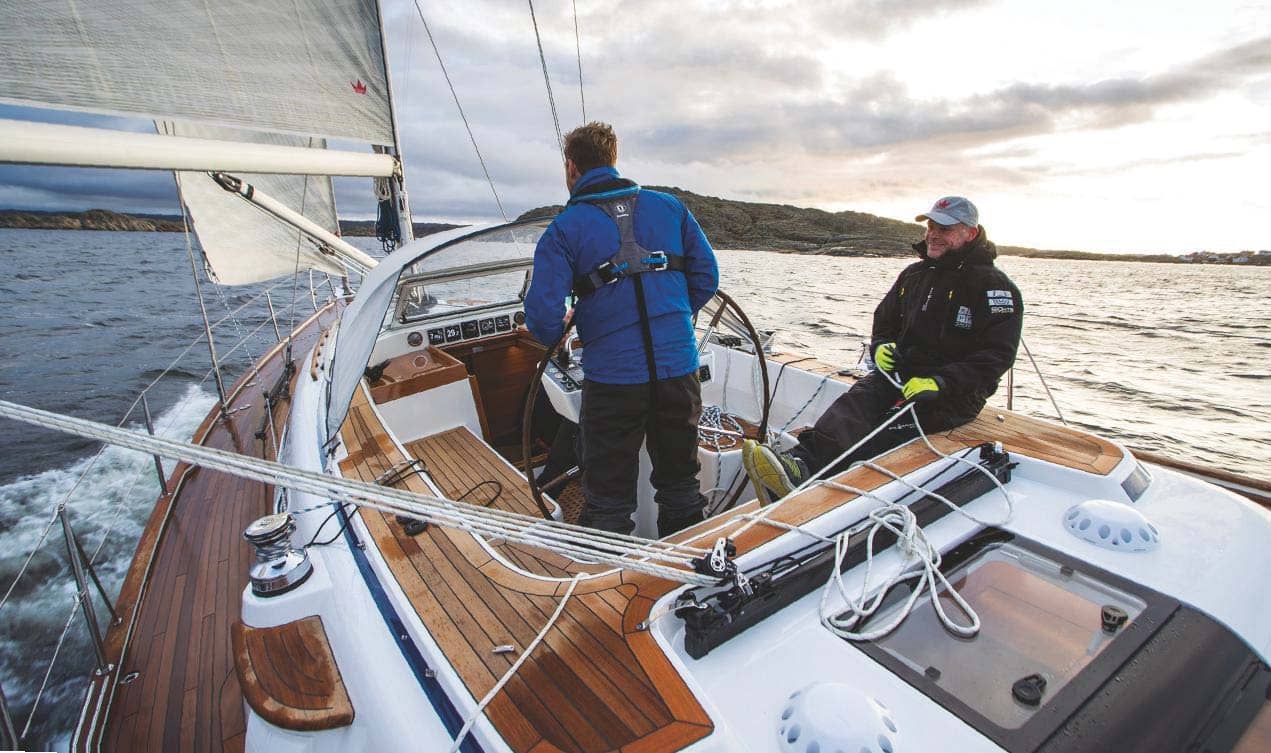 Germán Frers has designed a broad hull (a mere 2cm narrower than the larger 44) and near vertical topsides generate large amounts of form stability, enabling her to stand up to an increased sail area for the same displacement weight, creating a more powerful boat. This is turned into speed through the water with a waterline length of 11.74m (38ft 6in) which is only 56cm (1ft 10in) shorter than her length on deck and fully 2ft 3in more than that of the 40 MkII. Under the water, the knife-sharp entry gives way to a generously rounded forefoot, avoiding the flat sections of a V-hull that can slam when heeled, and leading aft to moderately flat sections for good running speeds. This is all tamed by two deep rudders, splayed to the extremity of her quarters for grip and control.

‘It’s hard to see why cruising boats didn’t go in this direction before,’ he enthused. But can such a hull shape really be as seaworthy? 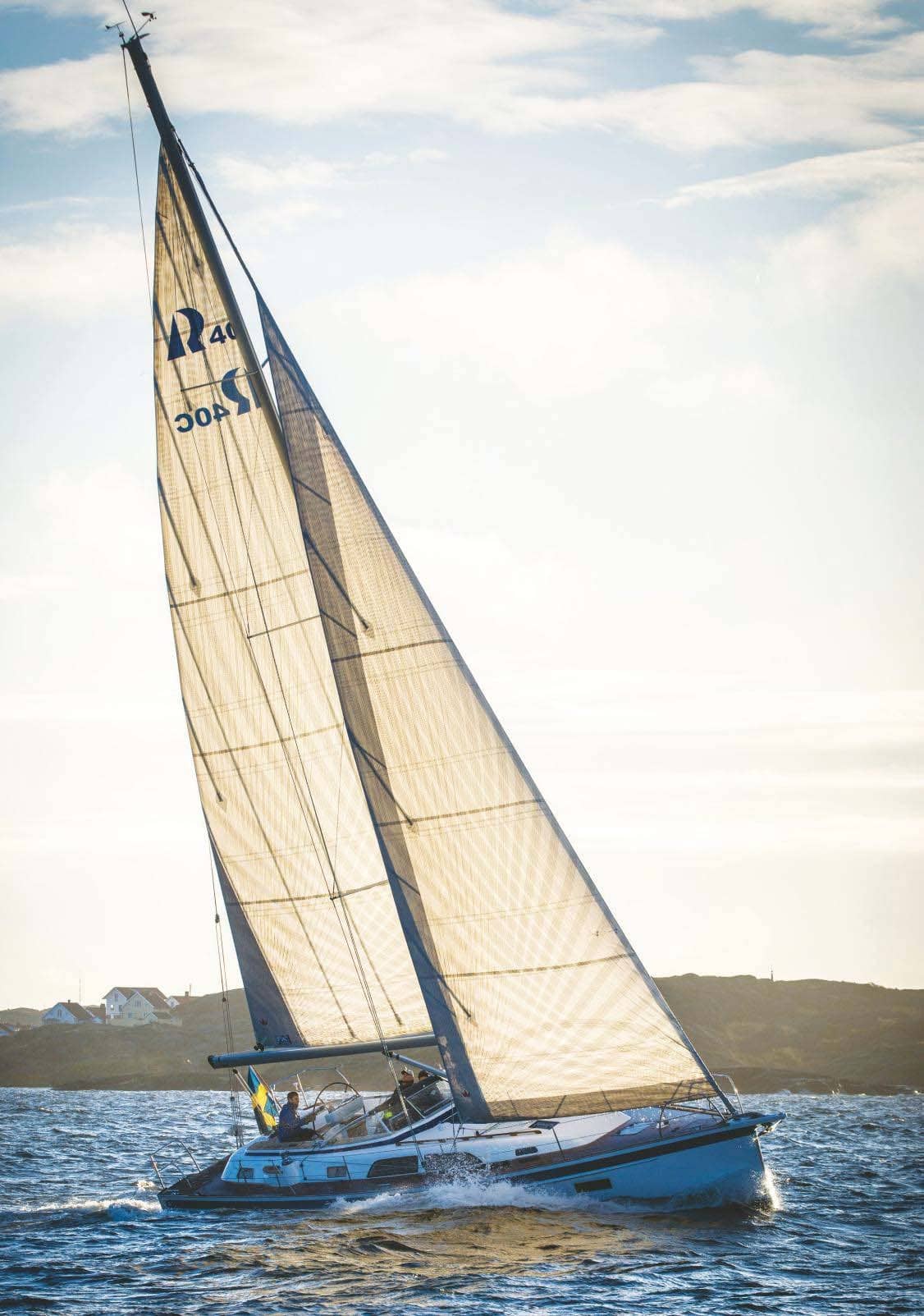 Sailing upwind in a Force 4-5 (20-22 knots apparent), with sheets cracked offa fraction to power us through the chop, we hit 8 knots, though mostly the speed was around the 7-knot mark at 40º to the apparent wind. Sheeted hard in, she would point to 30º, but the speed dropped to 5.5 to 6.0 knots, though this should improve in flat water. The polars suggest she will tack through 80º true, though in the rough water it was more like 90º to 95º.

While those figures are impressive for a fully kitted out bluewater cruiser, what was remarkable was the boat’s inexorable progress to windward despite the waves, showing no inclination to slam even as she threw clouds of spray to leeward, thanks to the deeply rounded forefoot and fine-entry bow, and with plenty of power to keep her moving. It was noticeable that the almost wedge-shaped hull did have a fairly ‘bow-down’ attitude, though the centre cockpit and windscreen elevate and shelter the crew, as well as mitigating the motion that is slightly livelier than a boat with longer overhangs. 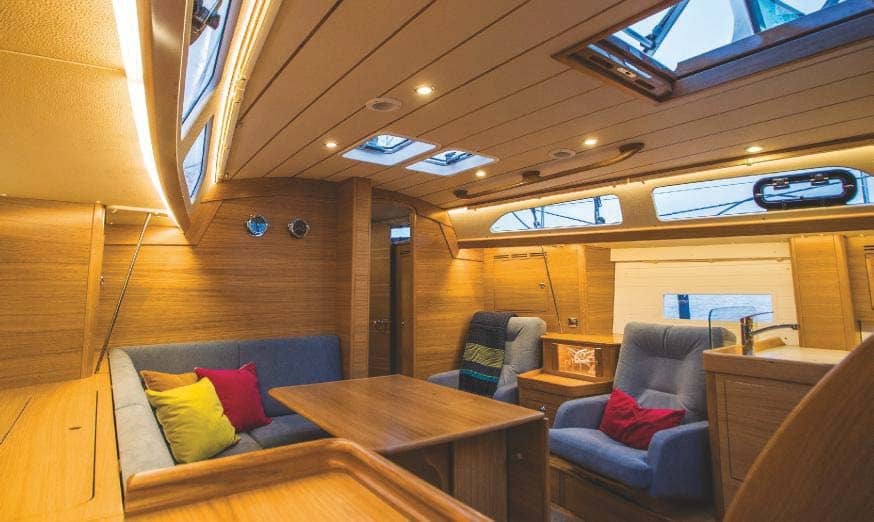