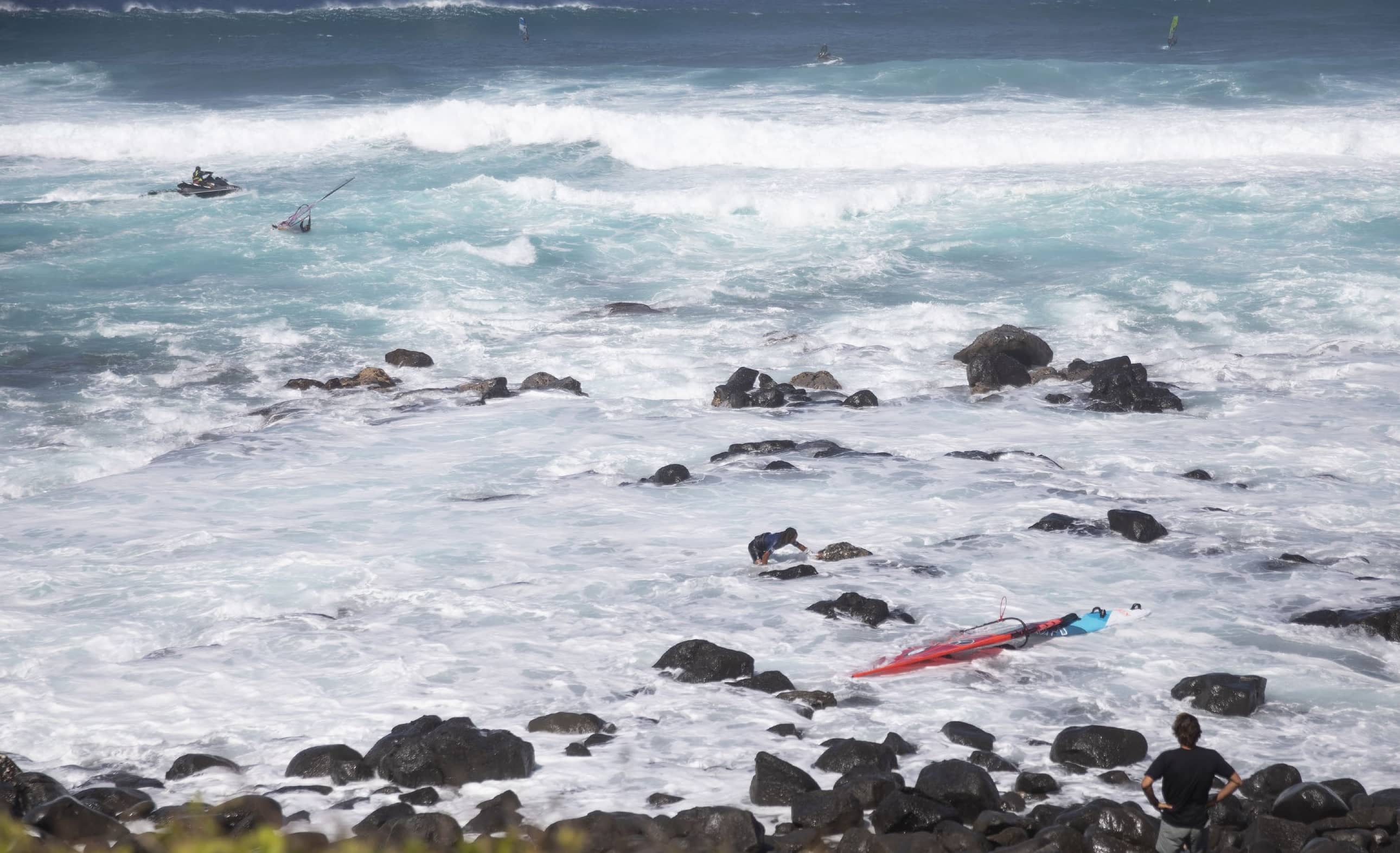 The 2019 Aloha Classic will go down in history as one of the most extreme float and ride if not survive and ride contests in PWA history. With world titles on the line and plenty of gear destroyed on Ho’okipa’s infamous rocks, the sailors did not hold back. We take a sideways look at the event as Graham Ezzy sets the scene with his take on the proceedings, while JC talks to some of the men and women who ventured into the swell to find out what equipment, technique and tactics they used to navigate a treacherous lineup.

“ T minus 24 hours to the start of the Aloha Classic, and I got a call from Rich Page, the manager of the PWA World Tour. He said, “We have a problem. A big problem. We can’t start the event.” By this time, all the riders had already flown into the island from all over the world—and the judges too. Mercedes had written a check to secure title sponsorship. The world was ready for the start of the most-watched windsurfing event in the world. A local law had just changed, requiring all events to hire security guards from a firm with a special license—only 2 such firms exist on Maui, and both were fully booked. The event’s permit requires onsite security, so no security meant no event. Page called me back to say that a loophole had been found: hiring off-duty police officers. But where could we find off-duty police officers for tomorrow morning?

Off-duty cops were eventually found and the event was officially announced to start at 11 o’clock the following morning. But this hiccup was only one in a series of issues.

An election shook up the local Maui politics and removed many of the pro-business, pro-tourism incumbents who had previously supported the Aloha Classic. Maui’s tourism had exceeded all targets, and the locals unhappily felt that the island was catering to visitors at the expense of locals. The new Maui council was wary about the Aloha Classic—a bunch of foreigners invading the beach for over a week.

Ho’okipa is the best wave sailing in the world. Sure, other spots have cleaner waves or longer waves. But Ho’okipa is a jack of all trades, and she is darn consistent. Despite the 12 hour time difference that means the livestream broadcasts in Europe in the middle of the night, the Aloha Classic has more European viewers than any other event.

Richard Page, Dawn Pooley, and Riho Shiraishi worked with the county on a back and forth conversation showing that the Aloha Classic is an opportunity for Hawaii’s windsurfers to shine on the world stage. Simeon Glasson, the owner of IWT, was in and out of the county offices. The permits were issued contingent on the guidance of a cultural advisor to ensure a respectful representation of Hawaiian culture.

On the eve of the event, the forecast was confusing. The weather models did not agree. A swell was coming, that was for sure. But when would it arrive? Would it be too big? Would the wind disappear? These were the questions on our lips. We humans try our best to predict the chaos that is the weather, but at the end of the day, forecasts are just educated guesses, not schedules.

Windguru predicted massive waves for day 1. For whatever reason, the Windguru models often get the swell wrong for Maui, too small or too big or too early or too late. For my own marine divinations, I use the human written forecasts on the University of Hawaii (UH) Meteorology website. The UH forecast said the swell would not peak until day 3. This lead to conflicting conversations. Some people were worried that day 1 would be too big to compete, with long lines of waves stretching from the left of the horizon to the right and breaking in one fell closeout. And other people (myself included) worried that there would not be enough swell.

The truth surprised everyone. On the morning of day 1, the ocean was flat. The swell was a rumour. The opening ceremony on the beach included, as in every other year, a native Hawaiian blessing. The ritual was lead by Kahu Kale Ka’alekahi. I’m generally apathetic in the face of ceremony, but I was moved and motivated. I later emailed him for a quote – “The competition in itself is beautiful because it gives us all a sense of purpose to come together and showcase our talents, these skills that we have been refining and cultivating from years of dedication. Everyone, all the competitors, the organizers, the contributors, come from different nations/countries, experiences and cultures, yet we find ourselves here on these islands in the middle of the ocean. This is what matters most: our ability to deeply connect to what gives us all life and continues to give us these gifts we call our talents and abilities, we receive all of this from the first and true giver, the living world! Remember where you come from, remember who you are, remember to remember, that the ocean and our world is how we have come to exist. We are because they have been, give yourself completely to this experience and to the enlivening of your whole self, this is where we call upon healing, this is where the blessing comes from, this is an evolution of our gratitude…” Towards the end of the ceremony, a helicopter flew overhead dropping a multitude of flower petals from the sky. As the flowers rained down, children from the local Pa’ia school chanted a native chant. Now empty of petals, the helicopter circled overhead as the photographers inside captured the moment from above.

After the blessing, the contest was called on. The sets were about chest high and intermittent. The wind was light and anaemic. I pity the sailors who lost in the early heats. The waves began to show up, but slowly. Near the end of the day, some heats had nothing and others were epic and full of mast high rollers. Heats were decided on wave selection, a fundamental pillar of wave riding skill. In my heat that day, I only caught two waves, neither of them very big, but I knew that I had to make the waves count because I would not have another opportunity, so I milked every section I could find and somehow came into the beach winning the heat. Day 1 ended with Sarah-Quita Offringa winning the single-elimination, paving the way to her first wave world title, extinguishing any doubts to her dominance in women’s windsurfing. On day 2 the set waves were big, aggressive, and angry; the sets were inconsistent, yet we managed to complete the single elimination in fair conditions. The following are my highlights:

Philip Koster, the wunderkind of the 20-teens, had already won 4 world titles going into the Aloha Classic, but yet, he had never passed a single heat at Ho’okipa. To Koster, the Aloha Classic was his kryptonite. But Koster is not actually bad at Ho’okipa or starboard tack sailing. The talented German can throw down his own share of moves and does not seem to be scared of big waves. I think the issue is the crowds. Growing up in the only house on Vargas Beach, Koster is used to sailing alone. Ho’okipa is an overcrowded fishbowl. The waves are almost always crowded with twenty or more of the best wave-catchers on the planet. To catch a wave is a battle of wills. Even though Koster spends time on Maui every year, he prefers to sail empty waves instead of fighting at Ho’okipa. But Ho’okipa is a beast of its own, and the only place to get good at Ho’okipa is Ho’okipa. Koster stepped it up this year and put in more time at Ho’okipa in the spring. His dedication showed. The heats were difficult, the waves were not only big but unpredictably spaced. This might make it sound easier to sail, but it made the heats very chaotic. You did not know whether the wave you were on would be your last. For example, in my last heat, I only rode one wave. I caught a second wave, but it was so bumpy and full of cross current that I didn’t do anything on it. And then the heat was over, and I lost despite having the highest wave score of the heat. C’est le Aloha. Koster really impressed me. He did what needed to be done and not only passed his first heat ever at Ho’okipa, but also made his first top 10 result there, securing his 5th world title. 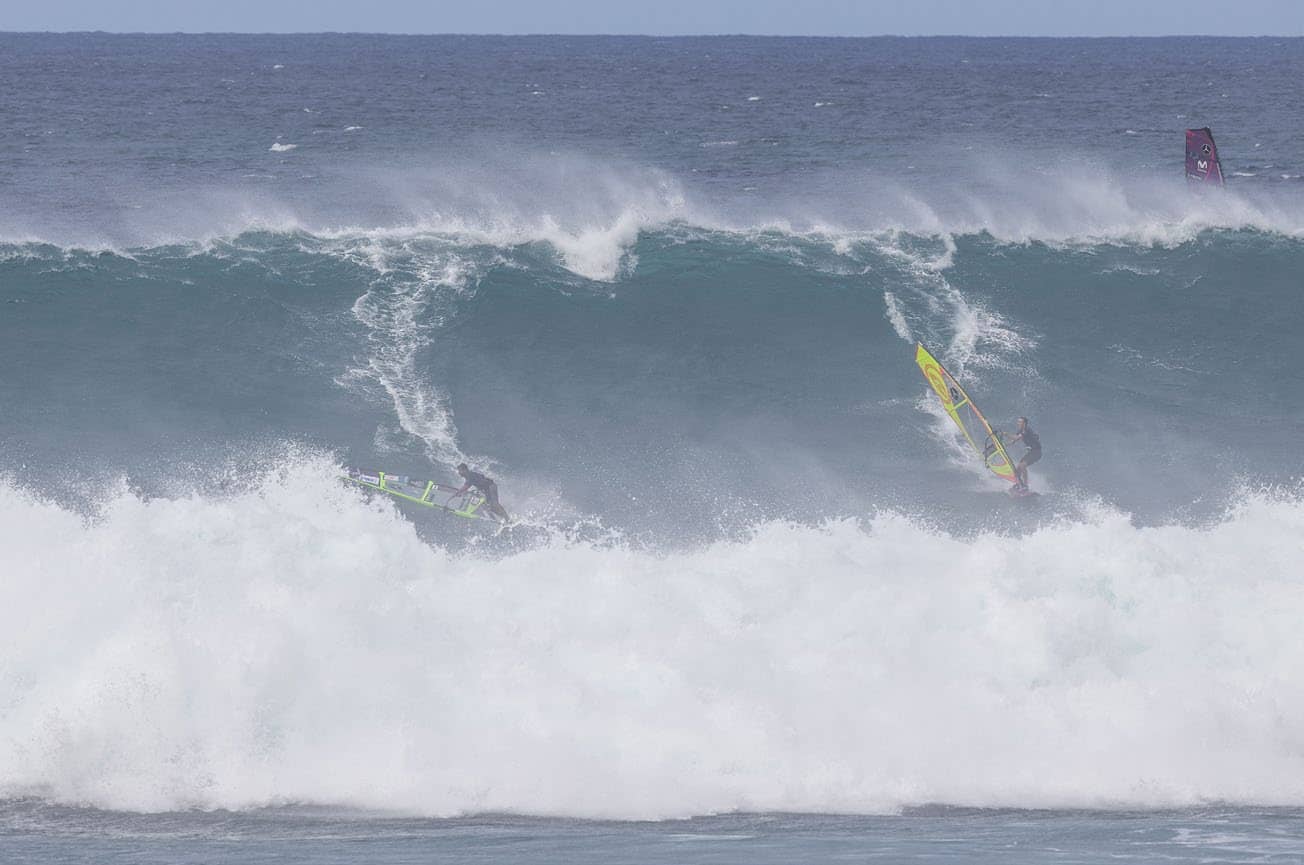 With the world title on the line, Venezuelan Ricardo Campello faced off against American first-year college student Jake Schettewi in the quarter finals. After the heat, Campello ran across the sand shouting at Jake: “You stole my wave!” Campello stormed off to the judges to protest the wave priority. As a PWA board member, I followed the commotion to see if I could be of any help. I grabbed Ricardo’s shoulder and told him to be calm. Ricardo said that Jake tacked on his wave. Jake said that he was on the wave first. This happens sometimes. PWA rules give priority to whoever first crosses over the crest of the wave before the wave in question. The judges reviewed the livestream footage which seemed to show that Campello passed over the preceding wave first and therefore did in fact have priority. Was Schettewi playing mindgames when he stole the wave from Campello? I do not think so. In the adrenaline pumped chaos of a heat, perceptions are far from perfect.” 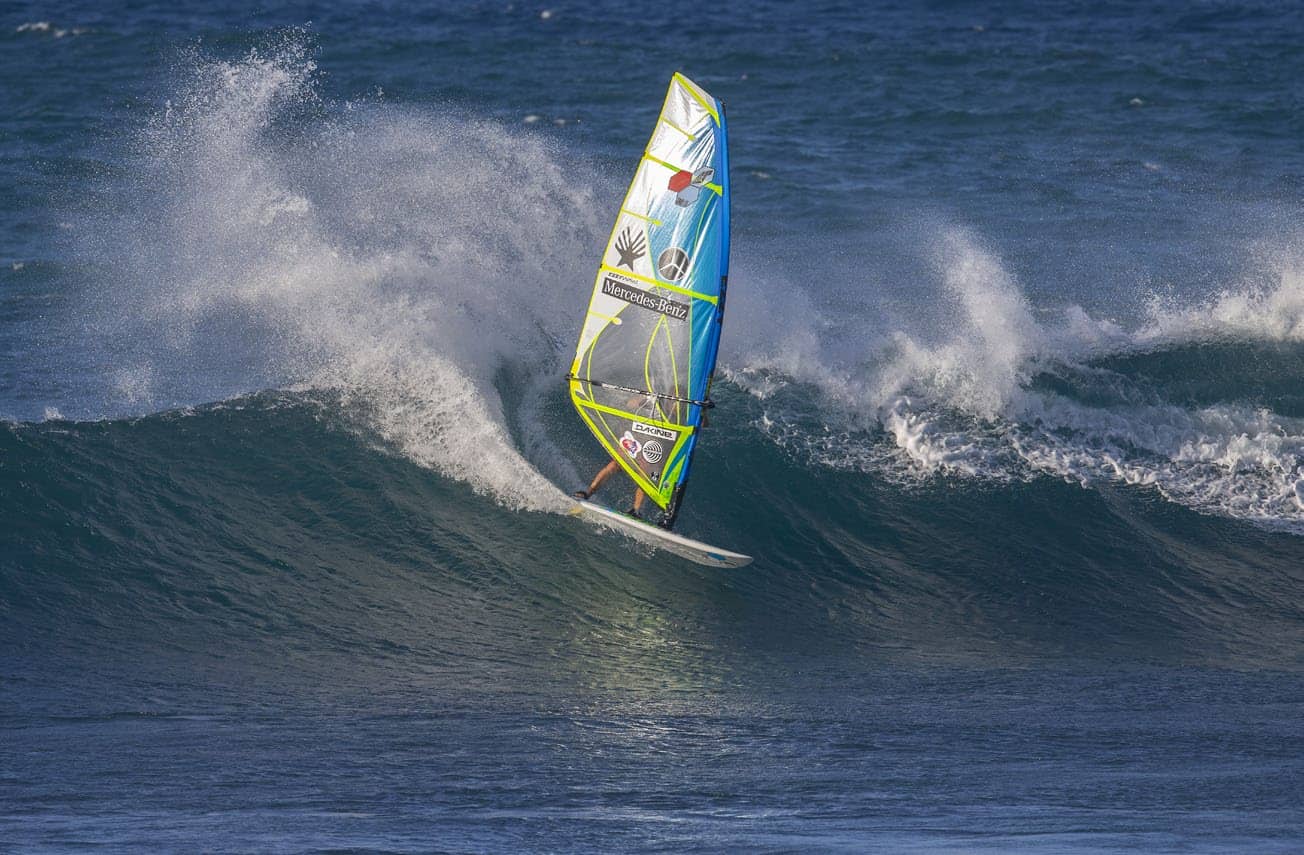