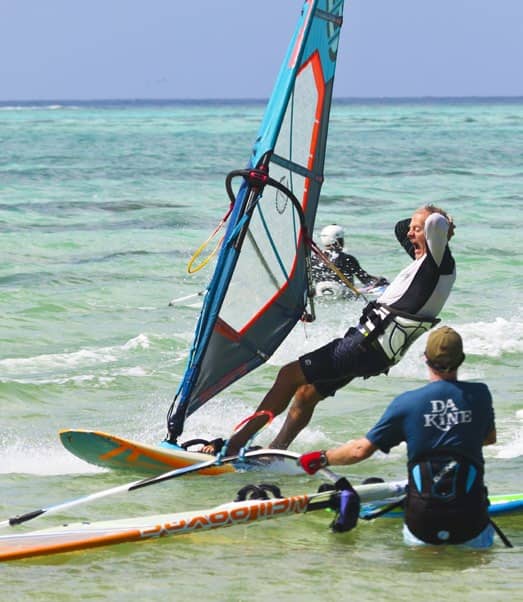 I woke up to see an earnest young doctor stand-ing over me. We were in the recovery room of Queen Alexander hospital Portsmouth. It was 1992 and I had just had the first of many surgeries on my troublesome right knee. Expecting him to pat me on the back and tell me I was as good as new, I asked him how the operation had gone. With no concern for my fragile mental state, he said:

“You’re the windsurfer aren’t you? Well you must think very hard about what you’re going to do with the rest of your life. You basically have the knee of a 60-year-old.” “You don’t suppose he wants it back do you.” I quipped desperate to make light of the situation. But it didn’t take a genius to decode his message – ‘you’re f***ed mate.’

For the two years previous, my knee had become increasingly sore and prone to swelling after a heavy session. I’d also lost a bit of movement. And because the quadriceps only tighten in the last 5° of extension, I’d lost muscle mass around the knee, making matters increasingly worse.

Following my initial consultation, the assumption was that a foreign body, a piece of cellular debris, was blocking and irritating the joint. A minimally invasive arthroscopy (keyhole surgery) would surely remove the obstruction and I’d sprint out of there – but apparently my condition was more sinister. The surgeon had spotted a small area of worn cartilage, which signalled the start of osteoarthritis (an incurable breakdown of the joint surface), for which hammering down speed and slalom courses with a weight jacket was not the suggested treatment. “If you ever want to play football with the children you don’t yet have, give up now.” Was my surgeon’s parting gift.

MORE STORIES FROM WINDSURFView All