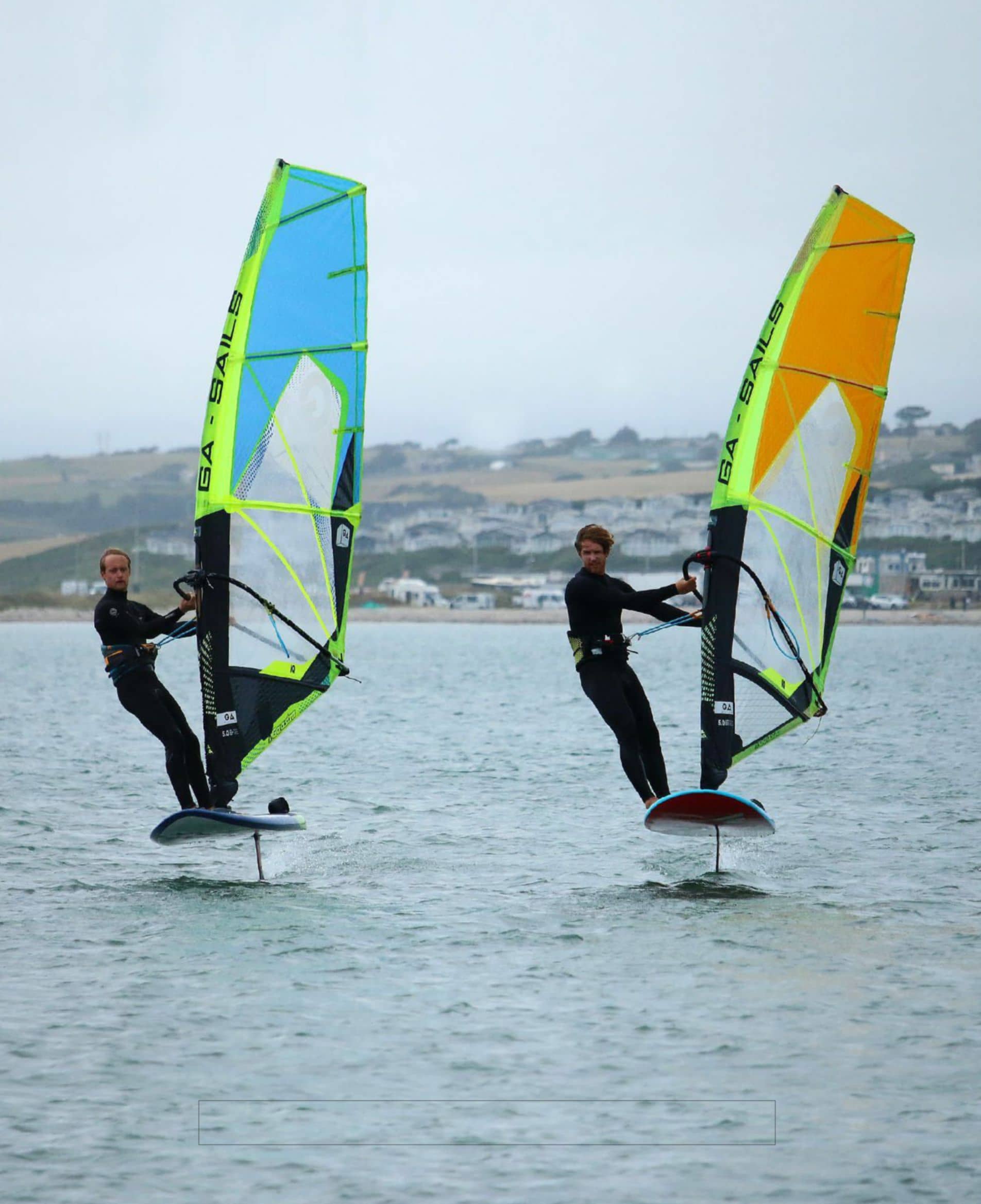 On a trip to La Tranche-sur-Mer in France last year, Tris Best estimated over 80% of the windsurfers were foiling. This summer in Portland Harbour, foiling activity has increased dramatically too he reports. With the market offering plenty of choice to recreational windfoilers, our test team check out some of the latest foil offerings.

Developments for 2020 in the windfoiling market are just as you’d expect of a niche sector that is maturing at pace. There’s a year of consolidation, a moment to inhale and reflect. Many brands are keeping their lineups much the same as last year, giving the market a chance to try what has already been presented. Some brands are introducing new additions; new wings or fuselages to experiment with and push range and performance. To this end, the modular system has proved its worth, providing future prospects in development for both the product and the user.

External influences outside the sport of windsurfing have been instrumental in progression. Design direction taken directly from kite foiling and more recently sup and prone-surf foiling is all tangible within the windfoiling market, making the choice available that much more rounded. And this cross-pollination has sparked a whole new watersport, wing foiling, whose roots and riding sensations rest much closer to home than others. Wing foiling is catching on like wildfire around the country. Initially ridiculed by some, it has now wholeheartedly been adopted by many windsurfers and watermen/women alike, like a wide-eyed fervent sibling. Many of the foils here have crossover potential to be used in wing foiling too, giving added value to the investment. And if you’re turning your nose up at the very thought or mention as you read this, all I would say is … don’t knock it until you’ve tried it for yourself!

As with the last few years, I’ve included a glossary of terms here, just to reconfirm some explanations and terminology. In addition, I’m also going to repeat some key tips, to keep your foiling experience a positive one:

• Firstly, stiffness in a foil is paramount. If there is any play or movement at any joint or fixing in the foil, its influence will be felt ten-times over in flight. When you come back in from your first session, check and re-check the tension in all the screws. If you’re using a Foil box / Tuttle box head, make extra sure the back bolt is tight and secure - this one will stop the foil jack-knifing into the hull of your board! If there has been any movement during your first outing, the front screw will be loose, so tighten it up!

• Aluminium and carbon don’t mix at the best of times but add the electrolyte of saltwater into the mix and you have the perfect recipe for your expensive new purchase to seize and become one piece! Take time to maintain your foil. Many of the brands are good enough to supply a marine-grade lubricant, but if it’s not supplied, buy some. Tef-Gel is the one we use in the centre - a small 5 oz pot costs around £20.00. A high price for a small quantity, but it really is a lifesaver. Before fixing your screws into place, dip the head of the screw into the pot … but then wash your hands because the stuff is incredibly sticky and heaven forbid you get some on your boom!

• The last point is that the setup between foil, board and rig is absolutely crucial. A good foil can feel terrible in a good foil board if the setup isn’t finetuned. Be prepared to experiment, some foils come with shims or washers to adjust wing angles; others can be tuned by simply adjusting some screws. Get the flight right and you are onto a winner, making your session fun and easy whilst others seem to be struggling.

To make sure we don’t lose you when we discuss the nuances between the foils by using unclear terminology, here is a glossary of the test parameters.

Early Lift - How early the foil will kick into action and elevate the board clear of the water. Another really important consideration is where the lift comes from - whether it is back-footed, front-footed or balanced between both feet.

Directional Stability - A foil is in effect a big fin initially, but when in flight, how directionally stable does it feel?

Response - Whilst in flight, you’ll want to control your height through gusts and lulls, on different sea states and during transitions. Response considers your sense of control fore and aft.

Flight Predictability - This is a biggie for everyone, from the novice to the pro. How solid and comfortable the foil feels underfoot largely determines how committed you can be and how much you can load it with power.

Which leads neatly onto…

Speed - Does what it says on the tin, a pretty clear-cut test parameter.

Reaching Comfort - Most recreational sailors blast across the wind, from A to B, and wish to do it for hours on end, without a struggle. In powered to overpowered conditions, it is actually one of the tougher points of sail, so how do these foils fair?

Pointing Ability - Just as we’re seeing in the PWA foil racing, the beauty with foiling is the ability to point, both upwind and off the wind. So what is the non-reaching potential of each of these foils?

Twitch - This term will be a new for many and describes the potential ‘play’ in the foil. It deals with any unexplained bounce, jolt or hiccup in the flight - an experience that momentarily rocks your confidence in control. It could be down to a myriad of reasons, but ultimately is likely to boil down to that holy grail of foil stiffness.

Manoeuvrability - Different to response, manoeuvrability deals with just how playful and throw around you feel the foil is. Does it encourage you to enter transitions in quick succession, or dread them?

Starting with the foil boasting the largest front wing, the Slingshot Infinity 84 is the Goliathan of early lift and getting going. It has its windfoiling limitations, but its ability to fly at slow speeds and be thrown around confidently make it a champion in manoeuvre-oriented flight, or crossing over into other foiling sports. The SuperCruiser from Starboard heralds directly from the surf-foiling arena, its front wing the same as the brand’s Wave foil, possessing a similar delta wing outline to the Slingshot. Silky smooth and user-friendly, it is every bit the plug-and-play star we recall from last year’s test, yet costs a chunk more with a carbon mast. If you’re buying into the brand’s modular system, and intend to use the mast in various setups, this could be a cost effective way to own a mast that offers so much more in performance. The RRD Universal is aptly named and exudes its fun, playful nature in whichever mode or setup it is partnered with. It won’t win races, yet opens up the genuine realisation that one foil can provide across many sports, flattering the user and maximising the return for little input or energy expended. The new 1500 option from Fanatic has taken their Flow series to new levels, with early lift and real efficiency in its glide. The mast and fuselage provide a superbly stiff platform and the 1500 willingly exploits their credentials. Next, there’s the Hybrid from GA Sails. With a front wing surface area of just 936 cm2 and a medium aspect ratio outline, it is a great ‘jack of all trades’, being easy to use yet fast and exciting to sail. And at a price of less than £900, it rightly commands a lot of attention. Finally, there’s the 4:All from Maui Ultra Fins - the first of many intended, in a soon to be expanded lineup. The only dedicated high aspect foil here, it is both rapid and engaging, and represents a solid base from which the brand can push to become a real contender in the ever-expanding windfoil market. So if you’re new to windfoiling, there has never been a better array of foils on offer to get you flying and progressing quickly. And if you can already foil, there are new avenues, new directions and even sports, being added all the time, with the foresight of established modular systems making any direction you choose accessible. When freedom has been a commodity sorely lacking from our lives in the recent past, we can’t think of a more liberating avenue in watersports than foiling. So enjoy this summer; get involved and experience the freedom of flight. 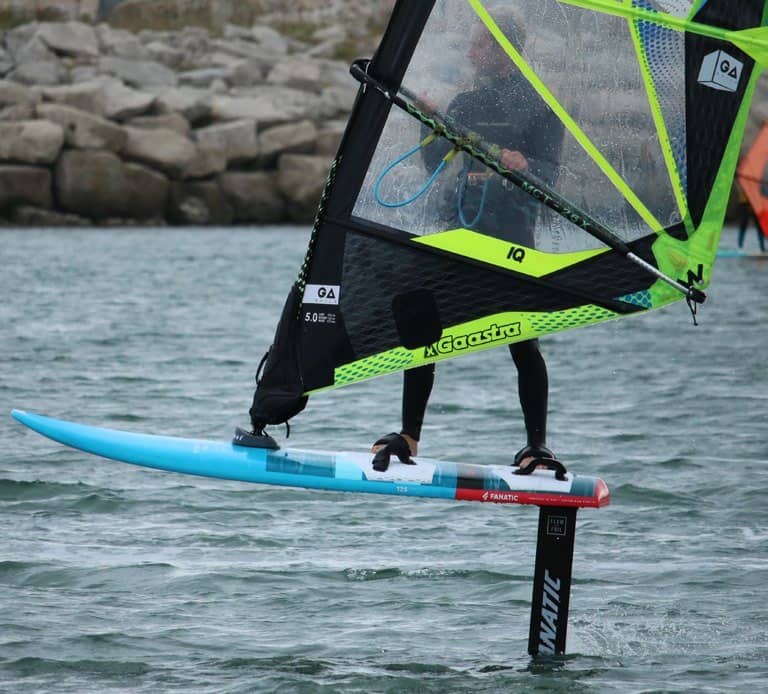 “The new 1500 is the ultimate weapon for the light breeze. Same as 1250, this wing is inspired by our easy and forgiving surf foils, with insane glide and real surfing behaviour, but in a faster profile adding speed and excitement. Flow Foil 1500 (Light wind weapon): earliest lift and insane glide – surf-inspired.”