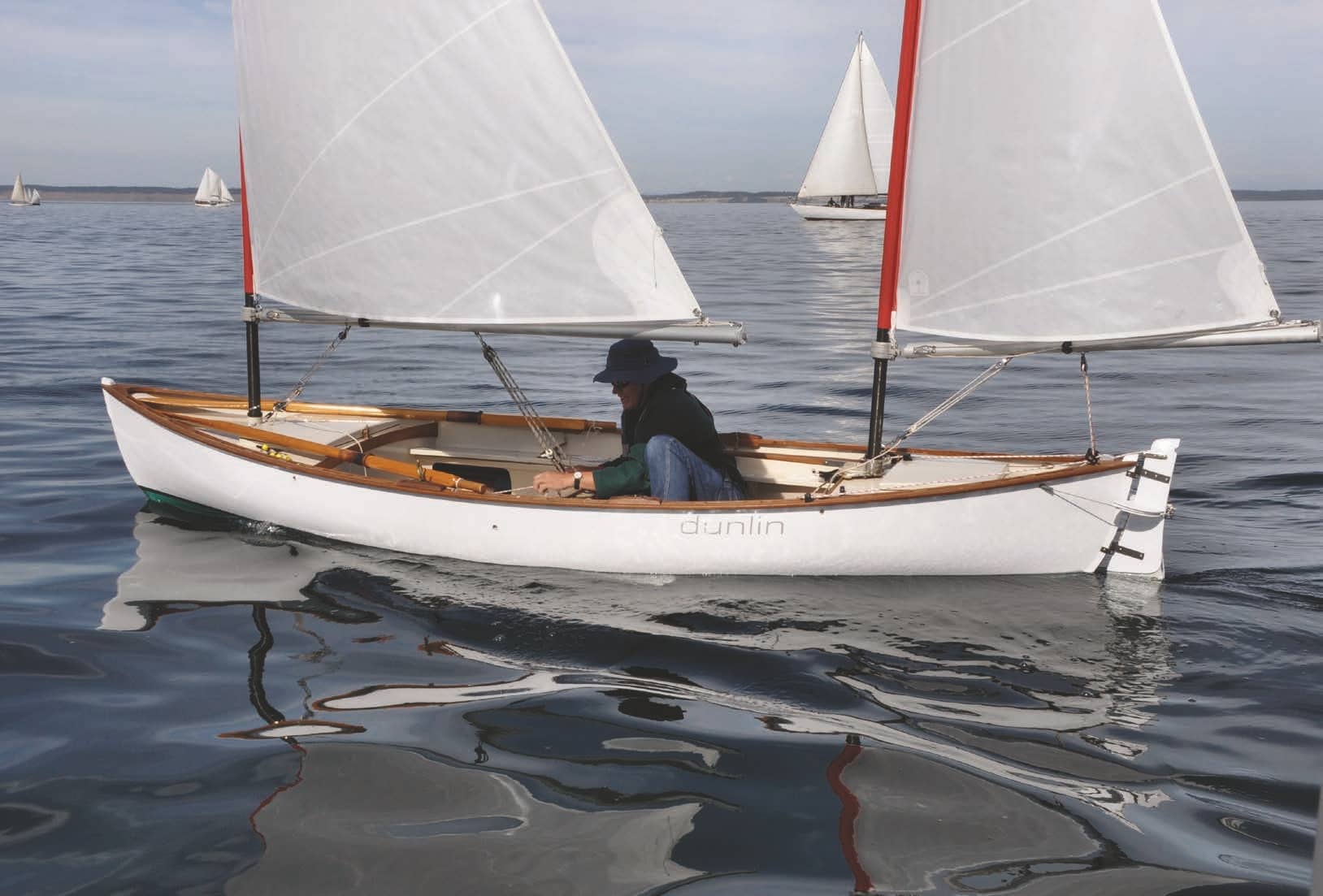 A brief row in a 13-foot peapod during one of our local small-boat gatherings inspired me to design and build a small cruiser.

The beauty, simple elegance and functionality of the peapod have always inspired me and it seemed a fitting starting point for designing a small cruiser/explorer. You can row it both directions, which is handy for exploring coves and such; it’s light enough to pull up a beach and has a seaworthy shape on the water. Lobstermen in Maine survived many perilous trips in peapods. Ironically the boat I ended up with is a far cry from the simplicity of the original inspiration, but the elegance is still there. I’ll take you through the steps, from rough idea to the finished product.

Peapods are double-ended, typically around 15 feet long and 4 to 5 feet wide. Within these parameters different shapes have developed over time. They first appeared around 1870 in North Haven, Maine. They were often used by Maine lobstermen working in tight spots where bigger boats couldn’t go.At the fishing grounds they were rowed, often standing up, facing forwards using extended oarlocks. They were usually sailed with a small spritsail, mainly reaching or running, but they didn’t sail to weather well. They were heavily built, using oak keels with cedar or pine planks over steam-bent oak frames.

I found lines drawings of several different models and compared them by copying the lines on transparent paper in a ½ scale. By overlapping various lines drawings I was able to study the many subtle differences. I was looking for stability, carrying capacity, maneuverability and aesthetics. I settled on Howard Chapelle’s own favorite tender for his schooner (plate 56 in his book Boatbuilding). He describes her as a heavy, but excellent rower and decent under sail. Her lines show relatively full sections and ends. 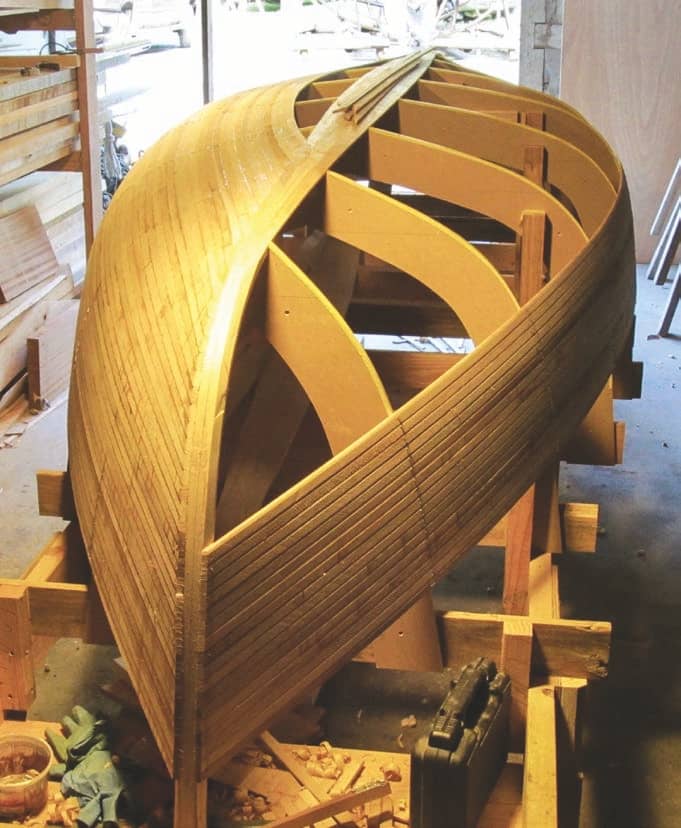 Port Townsend, Washington is a wonderful jumping-off point for endless exploring of islands, coves and beaches surrounded by beautiful mountains. Most pristine waters are north from there and access often involves a ferry ride. Putting a car with trailer on the ferry, however, is expensive. Hence the thought to try to make the boat “‘cartopable,” which would reduce ferry cost as well as make driving around easier. This put a definite limit to size and weight.

Chapelle’s detailed drawings show heavy scantlings with a 2 x 6 oak keel going down the center. I lofted the hull lines and lightened up the construction dramatically. Instead of the oak keel on edge, I drew a flat keel made of two layers of 3/8 Yellow Cedar, so she could sit flat on a beach. Laminated stems were reduced from their original size and made of Yellow Cedar while the hull is ¼ western red cedar with epoxy and cloth inside and out. Frames were eliminated since there was to be enough structure inside. The slight tumblehome was also eliminated and this increased the beam at the rails by a few inches to a total of 4' 5. Decks, seats and bulkheads were to be ¼ Okoume plywood. All up, including the rig, she weighs about 250 pounds. To get this boat on top of my truck would require some clever lifting device, which I made many sketches for but never built. A trailer would have to do for now.

As soon as one starts sailing, one challenges Mother Nature; she will try to push you over while you attempt to stay upright. Folks have come up with all kinds of ways to mitigate that force—ballast keels, multiple hulls, stiffer hull shape, added beam, greater weight, and more. In a small row/sail cruiser your choices are limited, however. Likely there will be a day where things get out of hand, so how a boat will handle swamped needs to be considered. I know from experience that a swamped boat can be really hard to manage—it usually just wants to roll over. Being able to self-rescue is vital. Watertight compartments or dry-bags are some ways to keep most water out while also keeping gear dry. 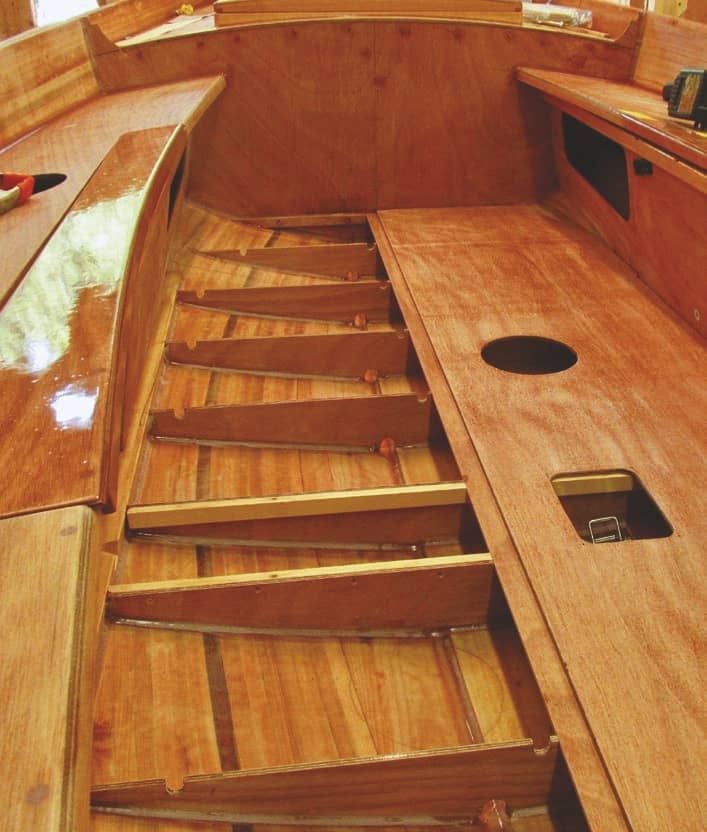 I employed watertight bulkheads with hinged access hatches in decks both forward and aft. Even the side seats are buoyancy tanks with screw-in hatches. All of this is constructed of ¼ plywood with glass cloth on all horizontal surfaces. If swamped, I’m confident one can bail her and get back underway before things go south.