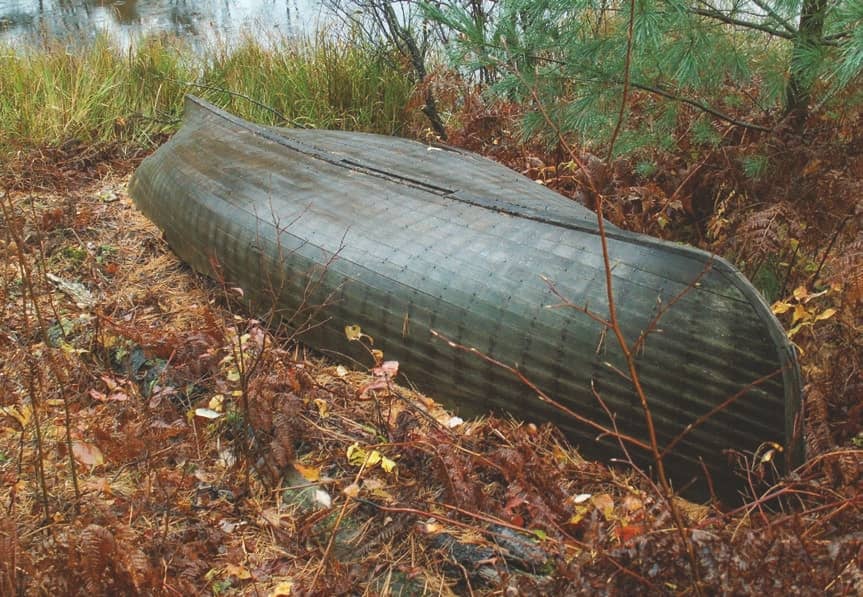 An 1881 Bowdish sailboat, abandoned in a northern Michigan junkyard, is rescued and restored to museum condition by John Parlin, wooden boat surgeon extraordinaire

Frank Farwell
Only a small slice of the population sees beauty in a bedrag-gled, sickly dog at the local rescue shelter, and with derelict, beat-up old boats, I think it’s the same. Occasionally, though, a rare person sees beauty where others do not, as if viewing life’s unfortunates through a rose-colored MRI device that can view below an unflattering surface and find an unnoticed trove of goodness, character and promise.

So it was one winter day in 2000 for Mary Braamse Edgar, an energetic, detail-oriented attorney from East Lansing, Michigan who had grown up at her family’s Upper Peninsula camp at Rock River Cabins, where the river empties quietly into the south-central shore of Lake Superior. Back in 1994 she had heard about an abandoned antique boat in the area, but it wasn’t until 2000 that friends took her to visit the boat’s owner, Edward deNavarre, at his house in the eastern U. P. Mary found the derelict boat upside-down in deNavarre’s yard with its keel hogged from many seasons under the snow. It was a relic from a bygone era, a traditional rowing and sailing boat lying forlorn in the snow. It had a broken spine and decaying wind-and-snow load-tortured hull, and seemed to be calling out to her for help from another era.

Most dedicated wooden boat enthusiasts would have gazed respectfully for a minute or two, and then moved on. After all, the amount of work it needed was overwhelming; a restoration was out of the question. This frozen outcast of a boat was something to look at, but not, for chrissakes, to restore. No, no, no. It was something to gaze at wistfully and be reminded of bygone days seen only in history books’ grainy black-and-white photos—nothing more.

But Mary was different. She started taking photos right away while the boat lay broken, fragile and orphaned in the cold. As she walked around the boat snapping pictures she began to feel an unexpected wave of respect and affection. She fell in love with that boat then and there, despite its miserable condition. The craftmust have stirred memories stored deep inside from the best days of her youth, during school vacations at the family camp.

“Early summers were at our parents’ Hiawatha Lodge on the Au Train River, messing around in boats, and later at Rock River on Lake Superior with rowboats, a canoe and rafts,” she recalls. “Our grandfather provided us with our own 6-foot plywood skiff we named the May Sink. One summer [brother] Pete and I each made our own sailboat in Granddad’s shop, then got into Mom’s handkerchief linen for sails. Were we in the doghouse!”

Those memories wafted back to Mary that chilly day as she stood by the derelict boat. She saw promise in its elegant form, as well as a reminder of the happy days of her youth, often spent in various wooden vessels that always brought fun and adventure, whether they floated for long, or not. So, she asked deNavarre if she could acquire the boat. Alas, he was not interested in selling. He said he planned to fix it up someday.

Four years passed. Time and age took its inevitable toll on both the boat and deNavarre; he passed away in 2004. Then his son told Mary she could have the boat. So she and her friends rescued all the pieces they could find in deNavarre’s garage and then transported them, and the hull, to Mary’s summer camp. Unknown to Mary or anyone, the boat was then 123 years old.

Soon afterward, Mary moved the boat to her brother Pete’s shop on Albert Street in Marquette. Pete Braamse was a highly regarded traditional wooden boatbuilder and rehab expert. His most famous restoration was a handsome 20-foot Rushton with three rowing stations, which had been rowed one afternoon earlier in the last century by a team comprised of Mr. and Mrs. Henry Ford, Mr. and Mrs. Thomas Edison, and Mr. and Mrs. Harvey Firestone at the Huron Mountain Club, a 30,000-acre wilderness preserve 35 miles north-northwest of Marquette.

Pete carefully looked over Mary’s old craft, grimaced, and then gave his assessment. “The boat’s too far gone,” he told her. Mary protested, but it was no use; Pete was the expert.

The boat stayed in a corner of his shop, neglected again; Pete even burned a few parts of it in his wood stove. Awhile later he moved the boat to the banks of the Rock River by the Braamse camp, where he laid it to rest on the family junk pile. Mary was back at work downstate, and the boat’s deterioration continued.

In 2006 a retired cardiologist from Cincinnati, who owned a second home nearby, found himself rummaging through the Braasmse salvage pile on the banks of the Rock River. With his Ohio practice soon to be sold and the realization he would have no patients to work on, John Parlin had developed a hobby of building and restoring, among other abandoned things, wooden boats, and the ancient but somehow-still-regal look of this boat made him pause.

“The Braamse trash pile was full of old cars, sawmill equipment, rusted excavators, and all sorts of stuff,” recalls Parlin, a tall, burley man with wire-rimmed glasses and the build of an aging linebacker, despite a childhood bout with polio. “I like looking at other peoples’ junkyards, and I had done two Chris Craftrestorations before—a 19-foot Capri and an 18-foot Continental—that were pretty rough when I started. I have a habit of taking things that are beat up and trying to restore them to their original beauty.”

For the next few months, on every trip north to his lakeside home, Parlin went to see the junkyard boat, to marvel at its shape and looks, and to wonder, just wonder if….

Pretty soon Parlin had made up his mind that this craft needed to be saved. “I could no longer stand the thought of this beautiful boat with the wineglass transom in decay,” he recalls.