My return to sailing as an adult was part of a campaign to beat depression through simple adventures I could access without a car. I’m sure others can identify with taking to the water when it’s time to shed our earthly cares. I wanted that, and I wanted my tow vehicle to be a bicycle…so, in 2013 I started hauling lightweight boats to the water and sailing. Ever ambitious, I gave my new passion a name: Bike Sailing. And the fullest vision of Bike Sailing is not being limited to returning to where I put in, because I sail with a complete ground transport system on board.

I feel a bit like the vegan in the joke “How do you know there’s a vegan in the room?… They’ll tell you.” It’s true. Being car-free is a big part of my identity and it’s behind all of my design choices here, so I have to put it out there early.

Ultimately, wind waves, max ebb tides and the spray-induced chills of San Francisco Bay don’t care whether I’m car-free, nor do they care about my mental health. I’m either prepared and able to harness the wind, or I’m not. I had ambled the line of being prepared with my first two craft, often a pit of fear in my belly each time I approached the dock, while nonetheless having exhilarating sails that would lift me for days. With each bike/ boat system I tried, I was pleasantly surprised by the ease of biking to the water and then forced to take what I could get in terms of seaworthiness. Could I keep the uplift of those smaller, lighter boats and lose the life-endangering aspects? Feeling it was only a matter of time before I got myself into a really bad situation, I started dreaming about a boat that would be seaworthy in a chop; that could carry my folding bike without it getting bathed in seawater each time; that could fit a friend or two, and that would still be beachable and bikeable! I got my answer earlier this year when I launched my 17-foot, 320-pound bike-specific sailing/rowing dinghy: the First Mod. With the First Mod I am essentially pushing bike-ability to its limit and gaining seaworthiness in return.

Craigslist had come through for me once before, and for months in late 2018 I scanned for larger used boats that could be made to work. But as I cross-checked the sailboat data, I kept seeing displacements in the range of 400-600 pounds for the Hobie Vagabonds, Chrysler Mutineers and Catalina 16s I was finding. I grew convinced that Bike Sailing demanded a custom craft. I needed to build something light and with an integrated trailer system. I liked the Argie 15 (Dudley Dix) enough to buy the plans, but settled on the Ross Lillistone First Mate because of its side deck, which felt more dignified and comfortable than perching on a gunwale. The other thing I liked about the First Mate was the beam—narrow enough to ride in bike lanes and dodge park bollards. For most of 2019 I was building in a side room at my Oakland business, Rock The Bike, with part-time assistance from one of my employees.

The result is a modified and scaled-up Ross Lillistone First Mate design, with an unusual and translucent G10 hull. It’s the third boat I’ve used for bike sailing and the only one built from scratch. It weighs 320 pounds loaded up for a sail—twice the weight of my previous fiberglass 13-foot Banshee production boat, and four times the weight of my original bike sailing system—an inflatable 12-foot Sea Eagle kayak with a SailboatsToGo portable sailing rig. 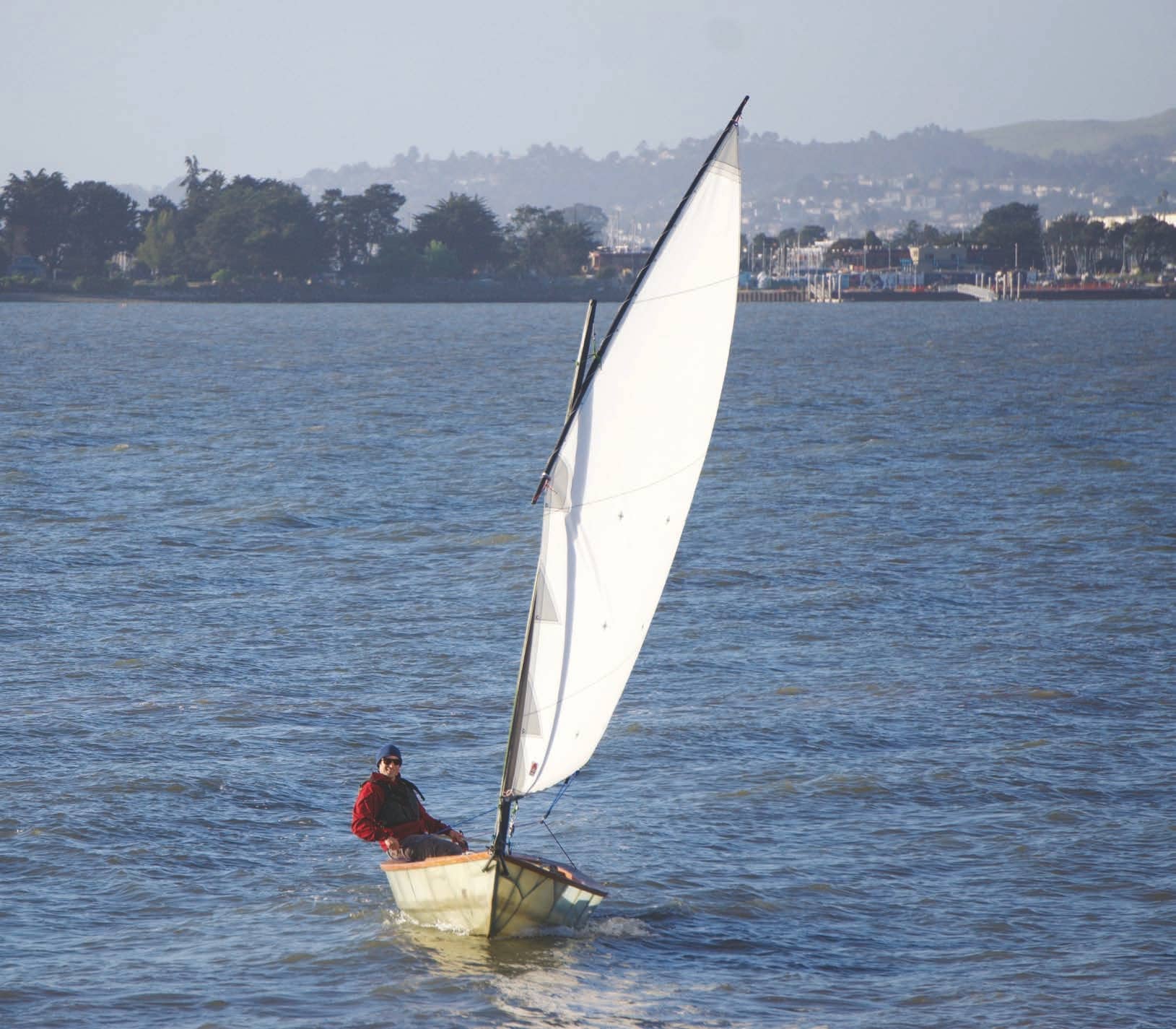