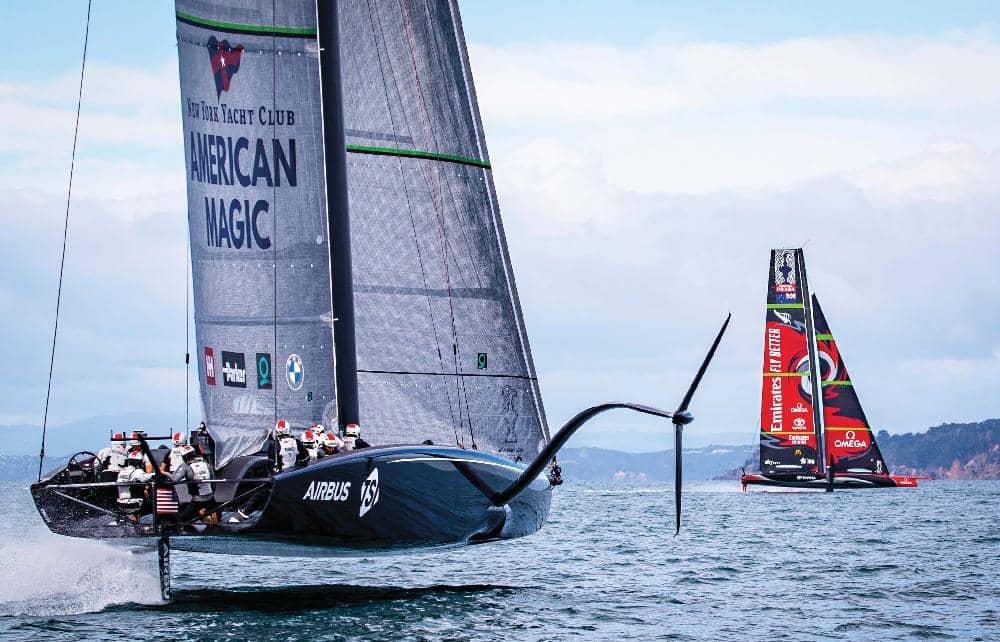 Over the next few weeks, all eyes will be on Auckland as the four teams for the 36th America’s Cup will – finally – assemble in the Cup venue

After cancelled World Series events (Cagliari, Sardinia, and Portsmouth, UK) so far denied the four America’s Cup teams the chance of any warm-up, boats and equipment were hastily rerouted and attention directed towards to New Zealand and 2021 instead. Not even the Kiwis were immune to pandemic disruptions, with their AC75 stuck on a needless voyage by ship to Italy and back. Now, with the sole remaining World Series event just three months away and the Prada Cup beginning beyond that, there’s no time to lose. We can certainly expect an exciting few weeks in store out on Waitemata Bay and the Hauraki Gulf. 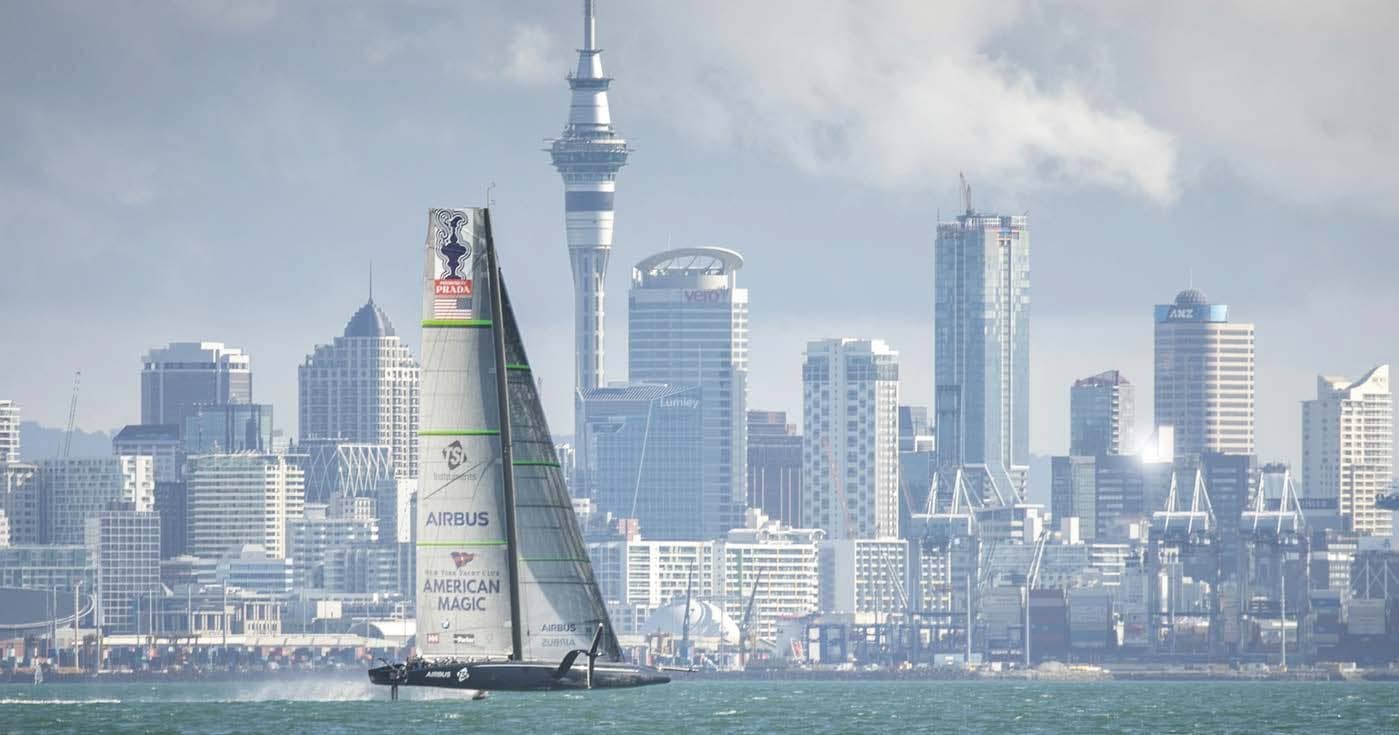 The only boat so far to join the Defenders on their home waters in Auckland is American Magic’s first generation AC75. Having leftthe team’s training base in Pensacola, Florida on 28 May, Defiant arrived by ship at the end of June and the Americans wasted no time in getting afloat. Naturally, they haven’t been able to resist a couple of informal line-ups against the Kiwi Defenders, Emirates Team New Zealand's Te Aihe, giving us a tantalising picture of the competition to come.

However, these are unlikely to be the actual boats used in competition. With each team permitted to build two AC75s, the Americans' second boat was due to be flown from their construction base in Rhode Island by early September.

INEOS Team UK and Challenger of Record Luna Rossa Prada Pirelli are taking a different approach. They are yet to arrive in Auckland, having so far remained in Europe to maximise training time.

Their second generation AC75s are both due to arrive by air in Auckland towards the end of September. Both teams have already begun a phased relocation of equipment and team members, each of whom must undergo a 14-day quarantine upon arrival in Auckland. Both teams will ship their first generation AC75s to New Zealand as back-ups. We can expect both Brits and Italians to be fully operational on the water by mid-October.

Meanwhile, the Defender has said they won’t have their second AC75 on the water until later in the year… Is it a case of waiting and watching? 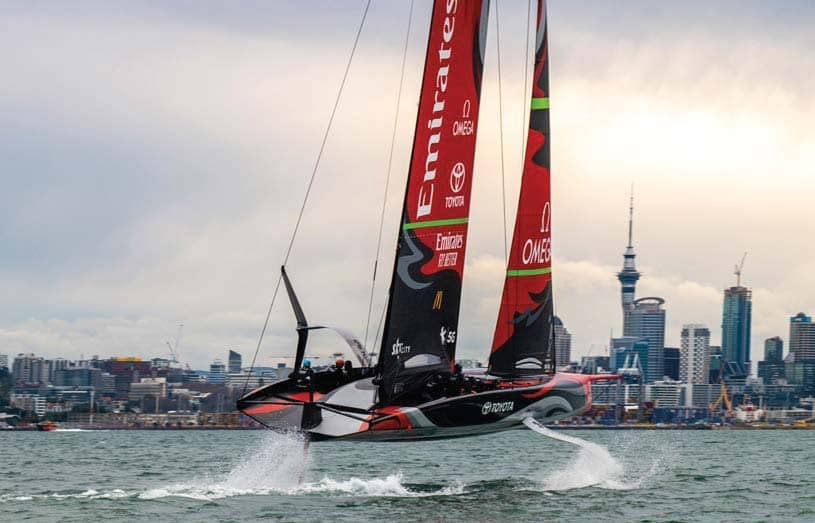 What have we seen so far on the water?

With the design emphasis on early transition from displacement to foiling mode, aerodynamic considerations have been at the fore. What have the first generation boats already revealed? Well, hull shape – where the rule allows for a lot of design freedom – has been perhaps the most obvious difference. While American Magic and INEOS Team UK have opted for a smooth, flat hull, almost scow-like in shape, the Italian and Kiwi teams have adopted a more vee’d shape with a ‘bustle’ toward the stern. The latter was an element the Brits then sought to add to their own design, hastily retrofitting a similar element to Britannia I.

Teams will be looking to cherrypick the positives for their second boats. NZ’s Te Aihe has so far shown a capacity for early take-offs, particularly in lighter winds. The boat had been prone to splashdowns, but emerged from time in the shed in early August with much improved stability. In contrast, the smoother hull on the USA’s boat Defiant allows it to skim relatively low to the water. Although slower on the take-offin the same conditions than the Kiwi boat - possibly due to more pronounced rocker - Defiant seems to sail well once airborne and maintain that through manoeuvres.

While masts, rigging, foil cant arms and their hydraulic controls are supplied one-design components, teams do have design freedom in the boom and double-skinned softsail, as well as the foils – the trailing edges of which will, for the first time, include flaps to control ride height. With design here a closely guarded secret and teams able to develop several sets, it’s unlikely we can derive any real clues at this stage. 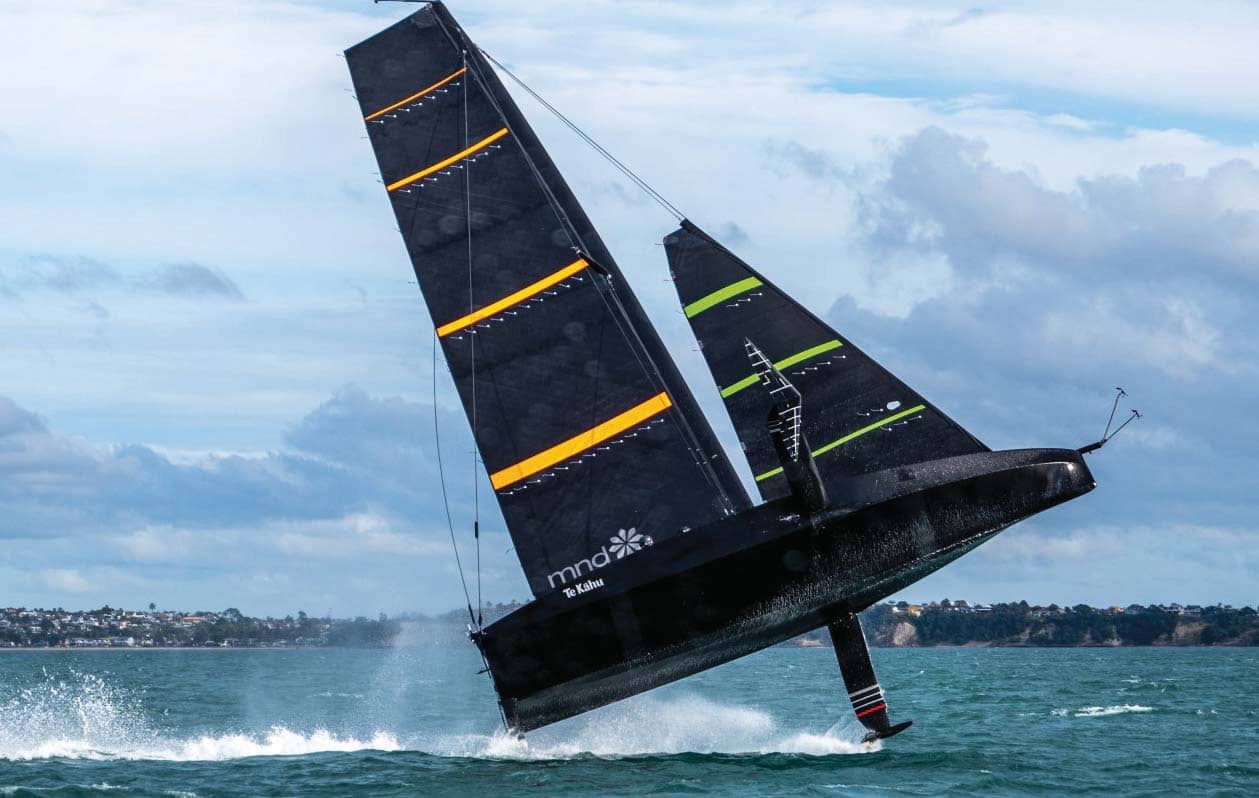 Meanwhile, the first generation of boats has helped sailors continue to refine manoeuvres, including foiling tacks and gybes. All so far have twin cockpits; there’s some debate as to whether it’s more efficient to have the crew switch sides during manoeuvres, or whether to split the team into two tacks.

It will be fascinating to see how closely all these ideas align or diverge when the second generation of boats is unveiled.

Max Sirena, team director and skipper for Luna Rossa told Y&Y: “You can tell, at least for boat #1, that each team has built with a different philosophy and design, which is interesting to see. However, I am pretty sure that with boat #2 the teams will come close in terms of design and look. Each one of us has followed and observed the opponents, so we have been able to study some of the characteristics of the others and easily understand what they have been doing in terms of boat handling, manoeuvres and measuring components.

Clearly it is almost impossible to measure the performance of the boats and this could be a big question mark. I think now everyone is looking forward to starting racing and seeing where everyone is.” 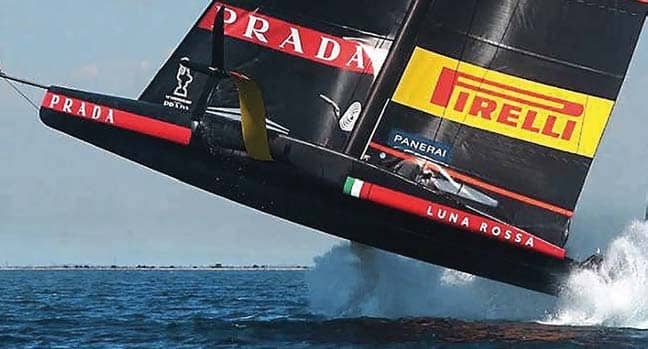 With the boats capable of 50+ knots there have already been a few hair-raising moments afloat. Capsizes will be inevitable and have already happened, as well as a dismasting for Luna Rossa which set them back a month with boat damage. At least two teams have experienced ‘thrust ups’ – whereby the boat dramatically projects, bow upwards, from the water as ventilation around the rudder causes the transom to drop suddenly at the same time as the angle of attack increases on the front foils, causing a massive vertical thrust. While designers and sailors will be doing their best to minimise this sort of thing, they will also be pushing hard as the Cup nears and the potential is there for drama.