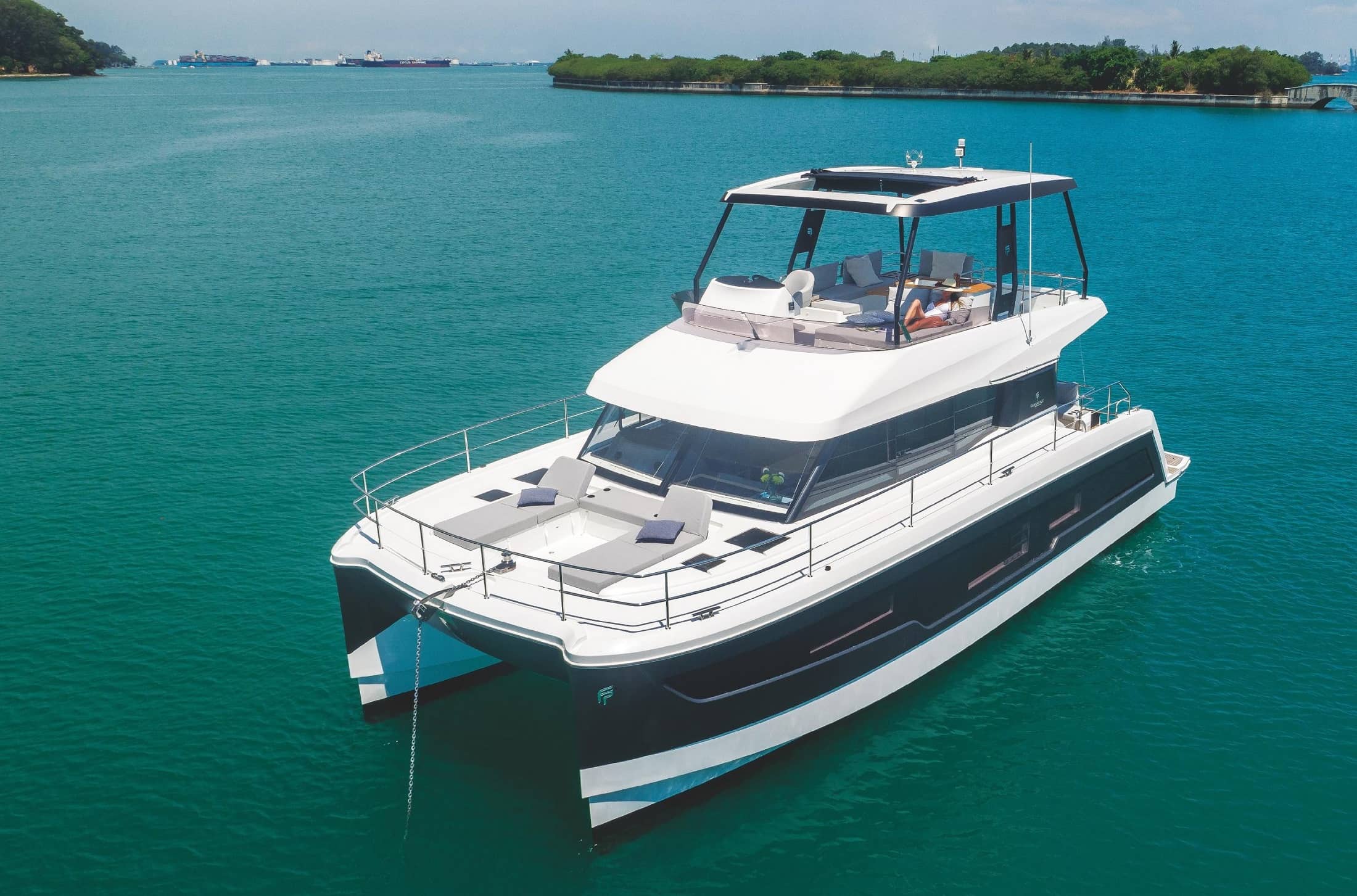 The French shipyard has scaled down its award-winning MY44 to create this new 40ft power catamaran. Is the IPS-powered MY40 as good as its talented sister ship?
Jack Haines

It stands to reason that the smaller a power catamaran is the more you feel the benefit of its width. Big monohulls have so much internal volume these days that the transition to a multihull doesn’t always have the impact you might expect but at this size (a whisker over 40ft) the advantages are more substantial.

Drop down into the port hull of the MY40 and you’re confronted with a cabin that only a monohull of almost twice the size could hope to equal. It just keeps going; you start in an entrance lobby fitted with useful bits of extra storage, then the cabin opens up and unfolds inboard to allow space for a large walk around double berth with views over the water thanks to an oversized window. Head forward and the ensuite bathroom begins with an enormous walk-in shower to port and a vanity unit to starboard and finishes deep in the port bow with a separate toilet compartment. There are some downsides like low doorframes (anyone over 6ft will need to stoop) and plug sockets on the side of the bed nearest the door, but for a boat this size it is an incredible cabin.

But here’ the thing, power catamarans have been providing this sort of living space for yonks but they remain relatively scarce due to concerns that they are expensive to keep and scary to handle as a couple. The former certainly has some truth to it, many marinas will charge extra for the privilege of all that lovely beam, but the latter is no longer the issue it once was thanks to Fountaine Pajot’s use of IPS pods. The MY40, like the award-winning MY44 on which it is based, was designed to run on pods and with a joystick comes an ease of operation that older cats with twin shafts and no thrusters could only dream of. It’s true that shaftdrive cats will generally turn in their own length because of the distance between the props but have you tried moving one off a pontoon with the wind pinning you on? Not easy, and this is where IPS makes life a lot easier. With a gentle nudge of the stubby joystick both hulls glide gently away from the dock, albeit more slowly than a monohull of the same length, until you have enough clearance to twist the stick and head on your way. No need to frantically fender up the forward corner and use springs to lever the boat off the quay, just push and go.