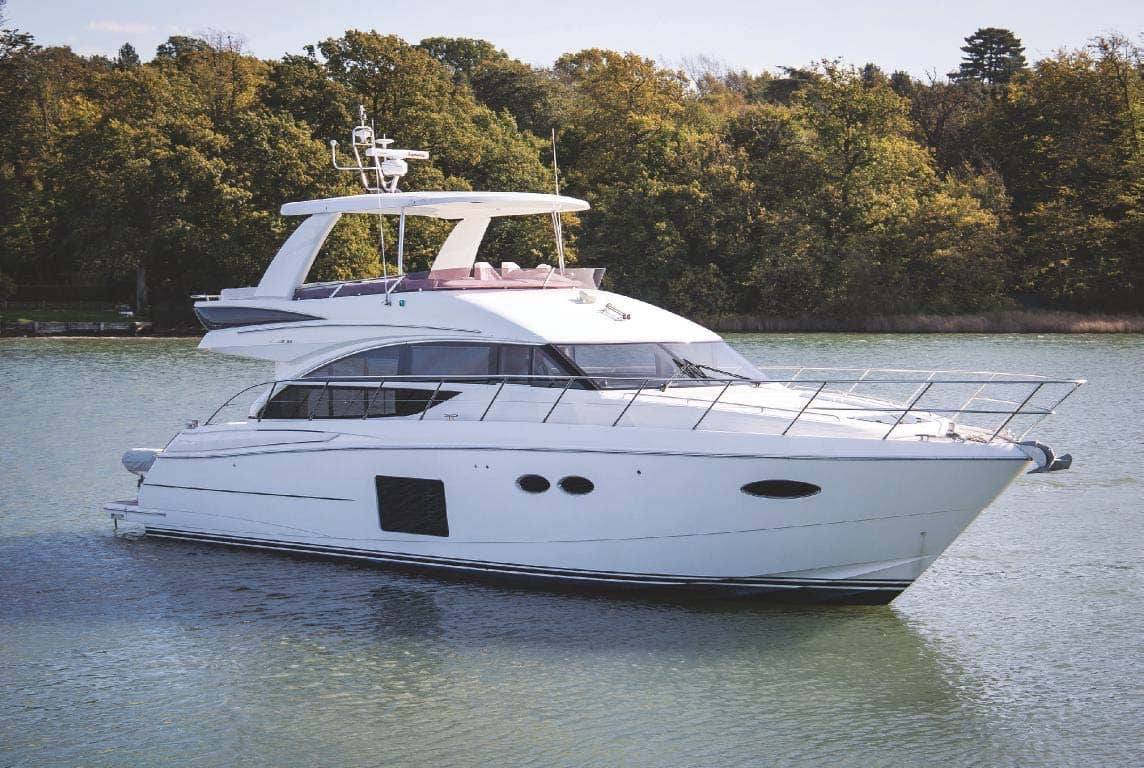 Replacing the already excellent Princess 54 was a tough job. The Princess 56, revealed to the public for the first time at the 2012 Southampton Boat Show was actually a larger boat than even the silver badge glued to the superstructure suggested, with an overall length just a few inches short of 60ft.

A rakish-looking flybridge cruiser, the 56 adhered to the Princess ethos of subtlety over brashness – this was and still is a good-looking boat. And while Princess firmly eschewed hull colours on earlier flybridge boats, the 56 was available from the off with Midnight Blue or Steel Grey hull tones on the options list priced at just under or over £10,000, depending on whether owners specified colour from the rubbing band to the knuckle line or all the way down to the boot top line. 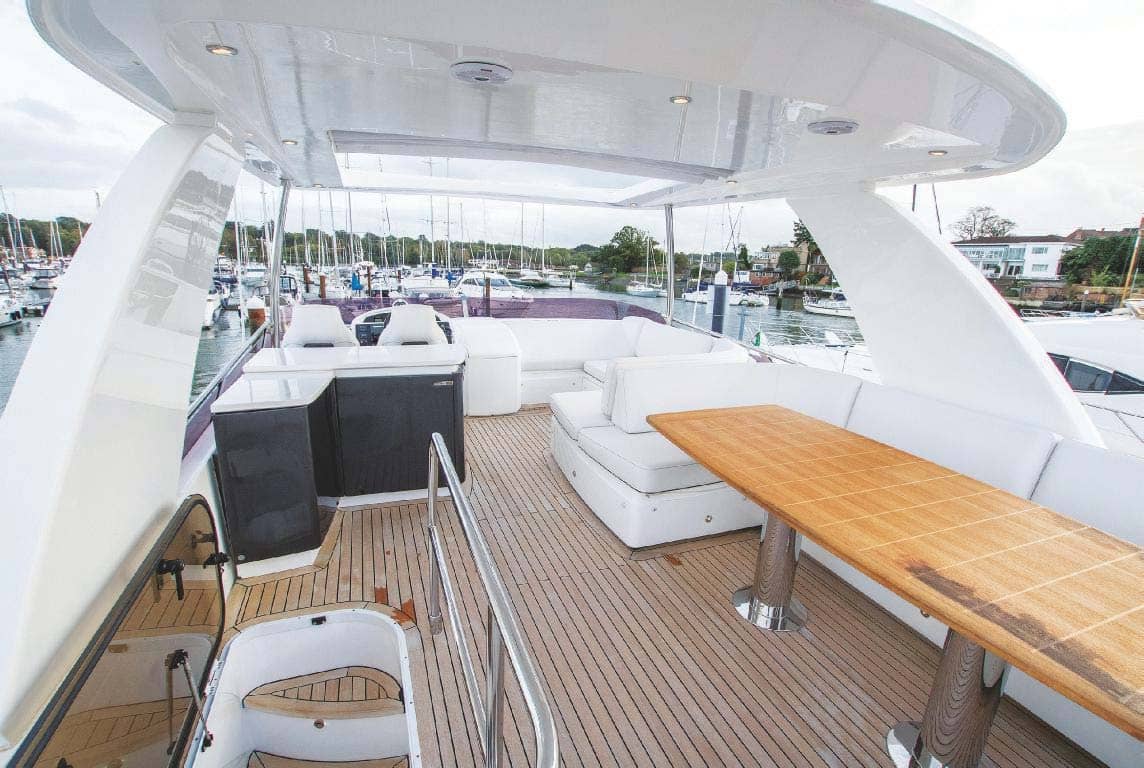 Step aboard via the frequently chosen optional electro-hydraulic swim platform (capable of lifting up to 400kg of tender or PWC) and you find two sets of steps up to the main deck, instead of the single set on the 54, allowing easy access whichever side you berth. Carry on up to the flybridge and the changes keep coming. The 54 had Princess’s generic double helm seats to port and a large C-shaped dinette to starboard with a sunpad aft. For the 56, the double helm seats remained. The wet bar immediately behind them was also still there, albeit vastly improved. But a lot more thought went into the layout generally. So the 56 gets an L-shaped seat next to the helm, but facing forward, so far more comfortable for those keeping the skipper company. And if you want a sunpad, just pull out the sliding infill, drop a cushion in and it’s right alongside the helm. What that does is free up the rest of the flybridge for a truly massive teak table with plenty of seating for everyone and awesome views to the sides and out over the stern. 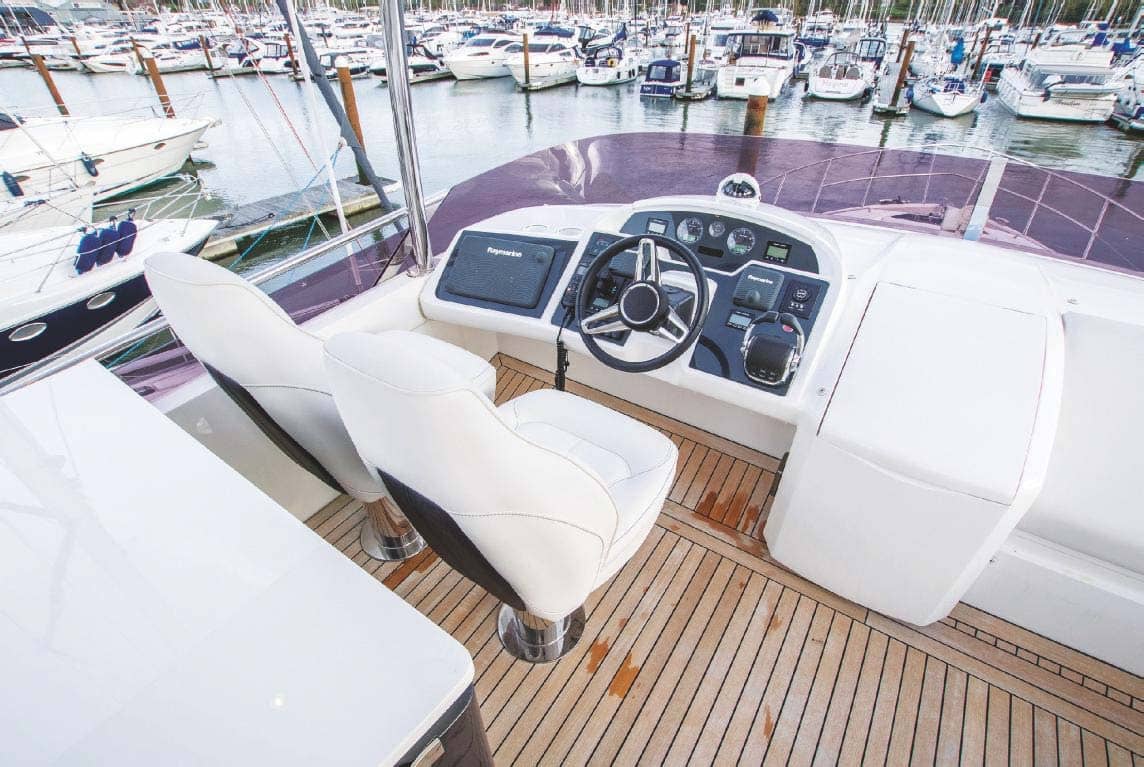 It’s the same story inside, a sense that someone has really thought about how these boats are actually used and what customers actually want, rather than simply updating existing models. It’s evident in the woodwork. Where previously Princess offered you two choices of shiny cherry – light or dark – in 2012 you could choose between light oak or serotina cherry, both in either satin (matt) or high gloss at no extra charge. Or pay a little more for a classy walnut interior, again with a choice of satin or high-gloss finish. But the big news isn’t the woodwork, it’s the layout. Although it didn’t make it all the way to the back of the saloon as is now fashionable, this is one of the first sub- 60ft Princess boats to have the galley on the main deck instead of downstairs on the lower deck. And in fact, while arguably not quite ‘on point’, its position just behind the helm seats and opposite the dinette works rather well, putting it centre stage, affording the chef a great view out, and linking the saloon – a step down and aft – directly with the cockpit. 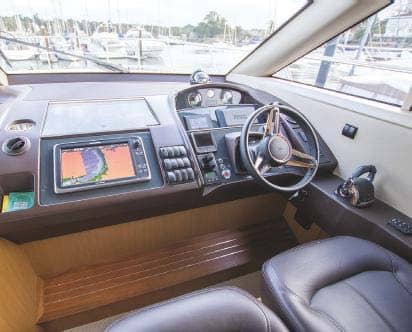 “The galley-up layout works extremely well for us,” says Jim Daniels, who owns the actual boat that was displayed at that 2012 boat show – the second off the line and bought through Princess Motor Yacht Sales. It replaced a Princess 45 which Jim and his wife kept in Lymington. Their new 56 is berthed in Menorca.