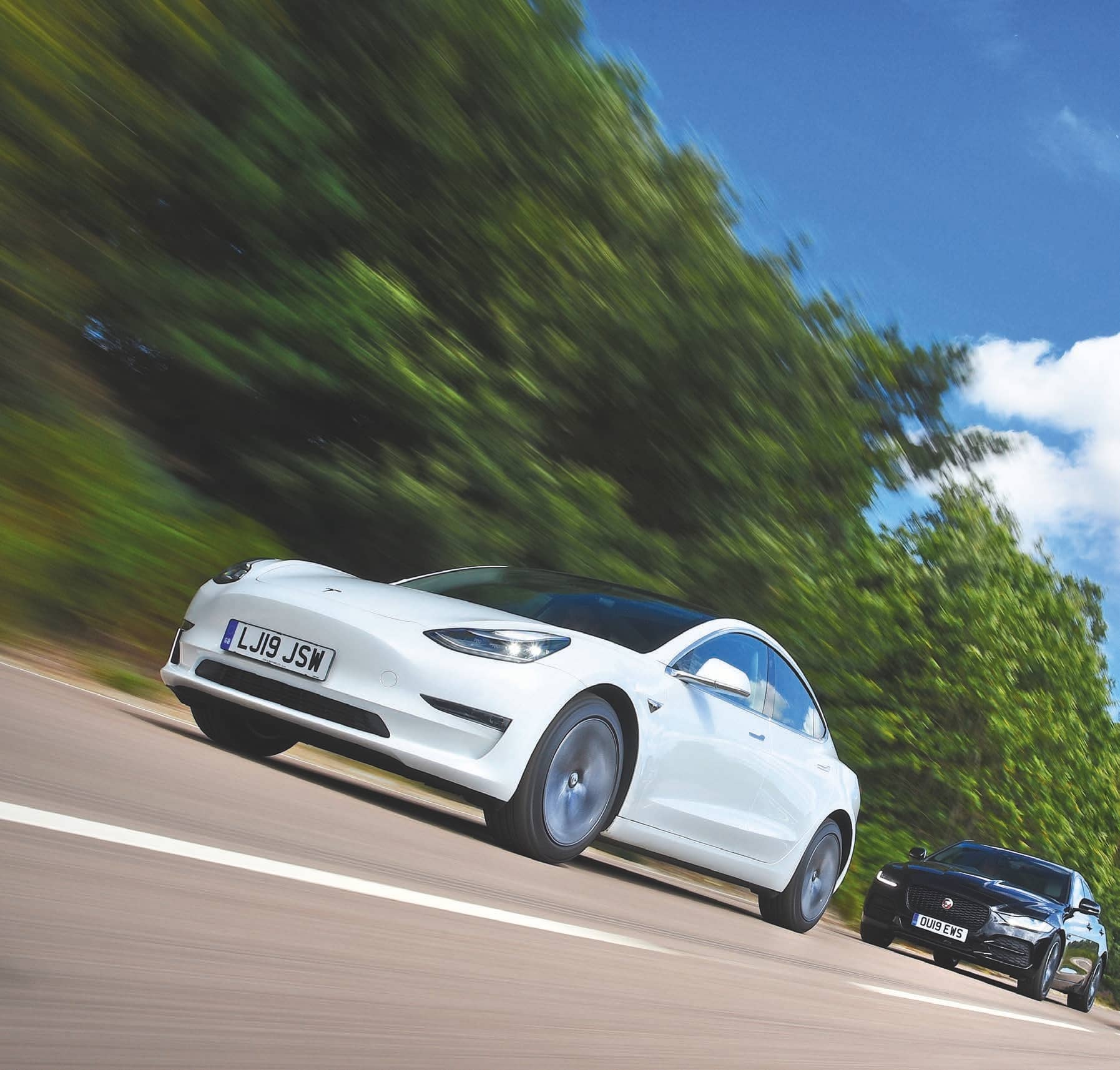 The electric Tesla Model 3 provides a genuine alternative to petrol and diesel power for executive saloons. Let’s see if it can beat the fossil-fuelled BMW 3 Series and Jaguar XE

BEING A COMPANY car driver used to be so easy: you just decided the model you wanted and then went for the most efficient diesel version of it. Job done.

These days, there’s so much more to think about. Should you even be considering a diesel? Would a petrol bankrupt you with its fuel bills? Or could you actually ditch fossil fuels altogether and go electric? You’re probably going to have to do so at some point, but is now the right time?

To help unmuddy the waters, we’ve lined up three of the world’s best executive saloons, each powered by a different type of fuel. In the petrol corner is the latest BMW 3 Series, complete with a 2.0-litre engine that has CO 2 emissions low enough to rival many diesels. Indeed, the 320i actually pumps out less CO 2 than the recently facelifted Jaguar XE D180. However, this 2.0-litre diesel XE is cheaper to buy and one of the few diesels to have passed the latest RDE2 emissions tests, meaning there’s no penalty in benefit-in-kind (BIK) tax over an equivalent petrol car.

Our final contender is Tesla’s new Model 3. The American company has been making electric cars with impressive real-world ranges for years, but until now they’ve all been seriously pricey. The Model 3, appearing here in its cheapest Standard Range Plus form, costs barely any more than its fossil fuel-powered rivals when you factor in a £3500 grant from the Government.

The Standard Range Plus is the least powerful Model 3 you can buy, but it can still comfortably see off its rivals in a drag race. Granted, we couldn’t match Tesla’s 0-60mph claim of 5.3sec, but 6.1sec is still faster than many hot hatches and well ahead of the 7.3sec and 8.2sec the 3 Series and XE posted respectively.

You’d normally expect an electric car to be lightning quick away from the mark, but the Model 3 actually took the longest time to sprint to 30mph, before pulling ahead and disappearing off into the distance. The Model 3 also required the shortest distance to make an emergency stop from both 30mph and 70mph.

But here’s the rub: you’ll need to stop to refuel (or rather recharge) quite a lot more often than you will in the 3 Series or XE. The official figures suggest a range of up to 254 miles, but you’ll need to drive like a vicar to get close to that. Indeed, the Model 3 managed 181 miles in our Real Range test – a decent distance and farther than you’ll get in, say, a BMW i3, but still potentially quite frustrating.

Tesla’s brilliant Supercharger network helps mitigate this, as we’ll explain later, but there’s no doubt the 3 Series and XE will fit into more lifestyles more easily. The former has a real-world range of about 450 miles, while the latter can do around 530 miles between stops. And refuelling is, of course, the work of a couple of minutes.

If you love driving, the 3 Series is easily the best executive car you can buy. It’s incredibly stable through corners, with more grip than its rivals and barely any body lean. It’s fun, too; the steering is incredibly sharp and accurate, even if the overly thick-rimmed steering wheel doesn’t give you a great deal of feedback.