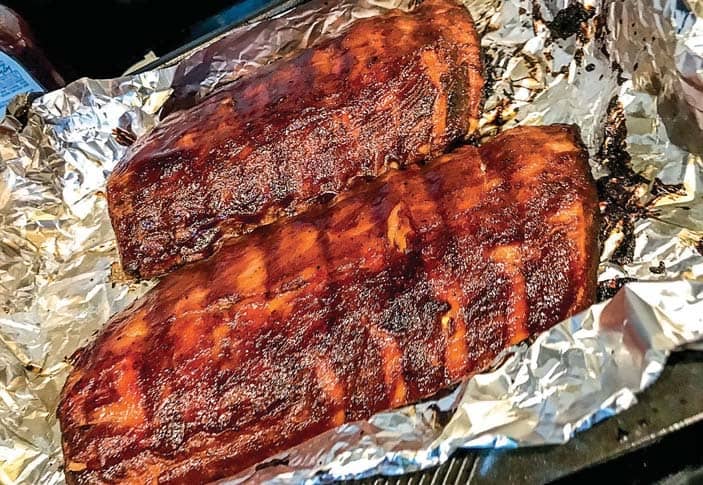 This isn’t our first rib rodeo, but here’s an alternative method of pre-BBQ prep for equally delicious baby back ribs`

This isn’t the first time I’ve covered BBQ ribs, but following a number of messages from readers that don’t have access to a slow cooker, I thought I’d share an alternative solution to the pre-BBQ preparation of these delicious, melt-in-the-mouth morsels.

When somebody mentions BBQ ribs to me, I picture a succulent rack of meaty ribs, smothered in sweet and smoky sauce, that when you start to eat the meat literally falls off the bone.

However, when somebody turns up at one of our campouts with a fresh rack of ribs they’ve picked up from the supermarket, or butchers, and asks me to ‘chuck some of that BBQ sauce on these bad boys’, a little piece of me dies inside. The reason being I know they’re gonna be disappointed when they end up with what I call a ‘knife and fork’ rack o’ ribs that is quite the opposite.

Don’t get me wrong, the reason they’re called BBQ ribs is because they are cooked on a BBQ (!), but there’s a big difference between a typical campsite grill and the huge, slow-burning fire pits used by restaurants to produce the real deal.

Slow cooking involve hours of gentle grilling over a wood or charcoal pit with regular rotation/application of BBQ sauce to seal in the smoky flavour and prevent the meat drying out. And that’s after they’ve been smothered with a rub, which has been left to permeate the meat for several more hours prior to cooking.

In short, a proper rack of ribs takes many hours to perfect, hence you need to help things along with some pre-grill prep if you’re hoping to create something similar on a portable charcoal grill before your mates have given up and gone to McDonald’s.

My preferred work-around to a slow cooker involves pre-cooking the ribs in a controlled environment (i.e. at home) and then simply heating them through and finishing them off over hot coals.

Even then, there’s more than one way to achieve that. Knighty prefers brining overnight and then gently cooking them in the smoker, for example.