Blame it on the Jamie

Like Type 25s to the air-cooled crew, T4s sit in a similar place with the water-coolers. Dropping prices of early T5s mean they’re shunned by many as the entry-level Transporter these days, yet are beloved by others precisely because they’re not T5s and ’6s.

Not yet old enough to be considered a true classic, but old enough now to be beset with common rust and mechanical issues, in our experience people either love them or don’t want anything to do with them.

So how can T4 ownership be deemed progress? When you’re an air-cooled VW Bus owner, and need something reliable you can drive daily, all year round, that’s when!

I’m old enough to remember when T4s were new cars – well, vans – and expensive enough that you had to give some serious thought to ownership. Back then, everyone was scrambling to buy the cleanest possible second hand one to convert into a Camper. White ones were sought after enough, but if you found one in a colour, and especially with a tailgate, you felt like The Man driving it. 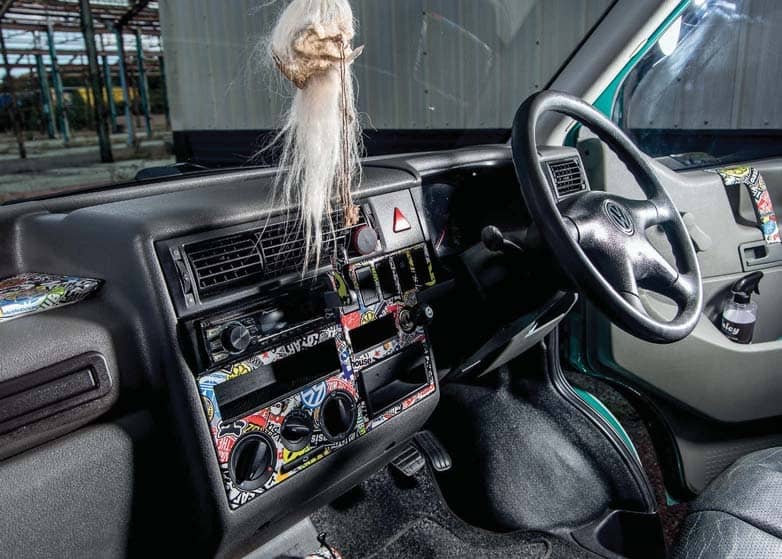 I’ve owned a few over the years, and the main problem in my eyes was the choice of engines. When I finally summoned up enough cash to get on the T4 ladder in 2005, the Y-plate Van I bought was only four years old. Indigo Blue, it was a tidy Panel Van, but no way did I have the means to stump up for the 2.5TDi, so was left struggling up hills with a 1.9TD, all 68bhp of it.

Years later, I hired a new 2.5 TDi to move furniture and discovered what a delight it was to drive. If only I could have afforded one of those back in the day.

Which in a very roundabout way brings us to Jamie Cox’s T4 you see here. Bear with me, please.

Starting with a 2.5 TDi automatic Caravelle, complete with wheelchair lift and no reverse gear, Jamie saved what was a prohibitively expensive Van in my day from being crushed to the tune of just £300. He then took it straight to his cousin Stuart at SDS Autocentre where the gearbox was removed, sent off for a rebuild and then re-fitted, along with a new oil cooler.