Welcome to the world of wind-in-your-hair motoring... presuming you have hair, that is...

MY HAIR IS A SOURCE OF MUCH JEALOUSY AT TG TOWERS.

Chiefly because I have some, while many of my colleagues do not. I am therefore much better at testing roadsters. Sure, I may not be able to get a McLaren 720S Spider as heroically sideways as Ollie Marriage, but I can certainly tell you how much of a mess you’ll look after a reasonably swift lap of Portimão. The answer, in case you too are follically well-endowed, is a bloody big one.

Nothing here is as fast down the circuits more than half-mile long pit straight as the 720S Spider. Not even the Porsche 935 or VW ID.R (which clatters almost immediately into its top-speed limiter). A good exit out of the final corner would see it sail past 280kph, but I chicken out at 260kph. Mainly because my battered fringe is partially obscuring my vision, but also because Portimão is not to be messed with. Every corner has its own collection of tire marks immortalizing bent metal, shattered carbon, and damaged egos. And I enjoy my job very much, thanks. 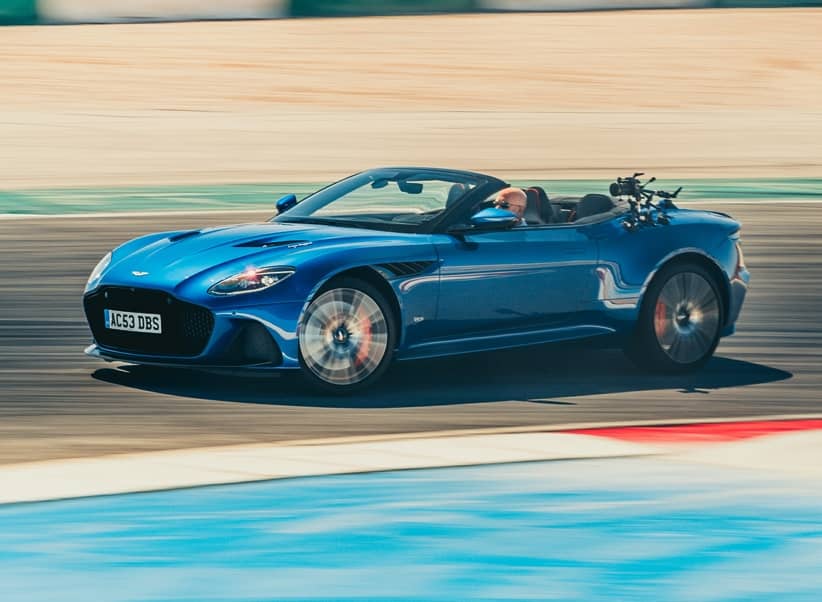 With enough space, the 720S will do 325kph, roof-down (341kph roof-up)… at which point it would actually be overtaken by the Aston Martin DBS Superleggera Volante, which its maker claims can do 340kph, canvas soft-top folded away or not. That kind of speed doesn’t just mess up your hair, it irreversibly restyles it.

Of course, philosophically, the DBS Volante and 720S Spider are not at all alike, even though they cost roughly the same money – R5,650 000 for the Aston, R6,550 000 for the McLaren (both significantly more as tested). By far the two most expensive road cars in our paddock of 15. One is a cutting-edge, mid-engined supercar, and the other a bullish, raffish, front-engined grand tourer. So we can’t really see anyone cross-shopping the two.