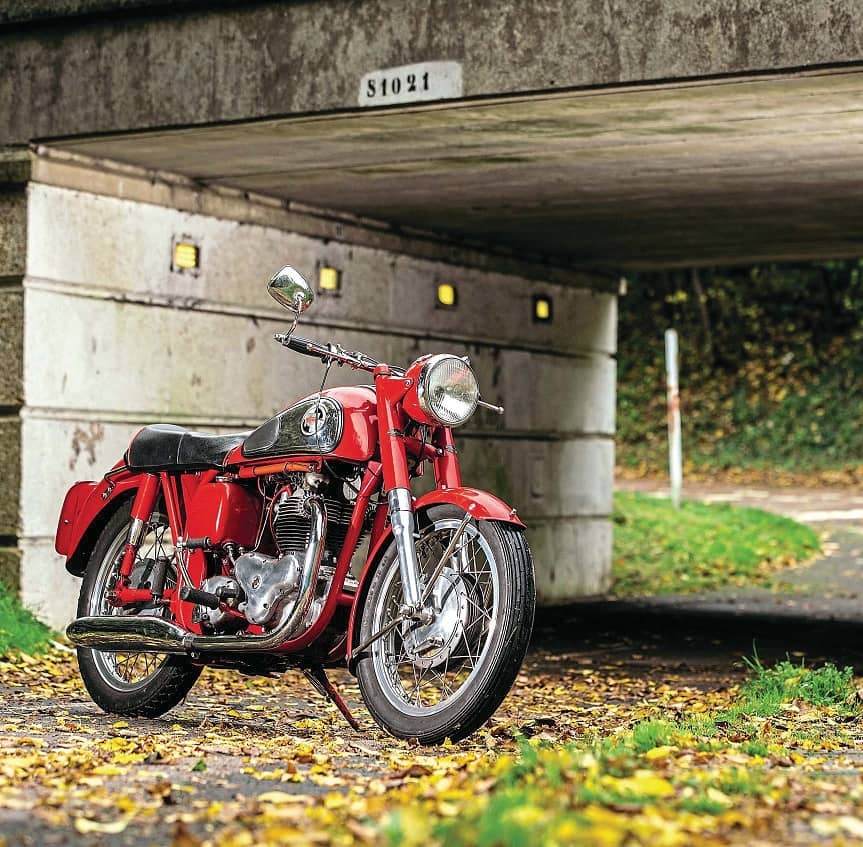 The Model 99 was added to the Nortonrange in 1956 for those buyers looking for more power and speed than theModel 88 could muster.

Pretty much identical to the 88, it ran the same parallel-twin engine – the capacity hike from 500 to 600cc achieved by increasing bore and the stroke; the same Wideline Featherbed frame and Roadholder forks; and it shared many of the same ancillaries – including the full-width alloy hubs, which had been introduced to the 88 a year earlier, partly in preparation for the capacity increase.

Reserved riders got Norton’s signature ‘polychromatic grey’ livery, the extroverts could stand out with a rather nice ‘Atlantic blue’ or an even more eye-catching red.

The story goes that Red Dominator 99 models became available after London-based distributor Comerfords requested a batch from the factory – the sales team adamant they’d sell more if it was an option – hence the colour commonly being known as ‘Comerfords red’.

It’s often said that the redmodels were only available from Comerfords, but a bit of digging in the factory records by the Norton OC reveals there were around 940Model 88 Dominators and around 250Model 99 Dominators painted red between October 25, 1957 and February 10, 1960 – one must surmise the factory decided it was indeed a good idea.

The story continues it perhaps wasn’t and that the red paint had a tendency to fade to a less than attractive orange hue within a year – if any owners of Comerfords red Dommies can confirm this, or any Norton agents at the time relay any exchanges they had with buyers, we’d be interested to hear from you.

I wouldn’t advise it

Gordon Hallett bought this Wideline 99 in 1993, as an almost complete and original project: “I worked with a guy, who bought it with a view to restoring it. He never touched it, instead he decided he was going to celebrate his 25th wedding anniversary with a big do, and so sold me the Norton. He spent it all in one night!”

It had been subject to a few part-rebuilds and ‘improvements’ over the years and the wiring was definitely in need of attention, but it was a solid base for a restoration.

Gordon was – and indeed is still – no stranger to resurrecting motorcycles. An engineer by trade, he has the knowledge, skills and equipment to tackle every aspect: “It took me a year, almost to the day. I did everything at home.

“It was a labour of love, really. I made a lot of stainless parts from scratch for it – the existing bits were not nice – hoses, engine plates, mudguard stays and a few other bits.

MORE STORIES FROM THE CLASSIC MOTORCYCLEView All