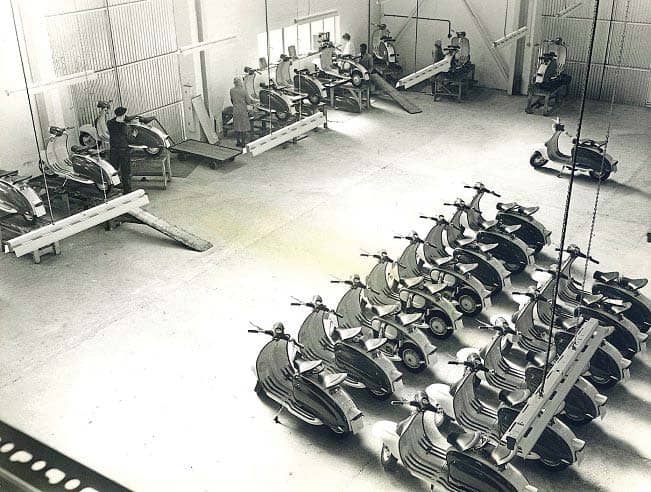 1959 would see the introduction by Innocenti of the Lambretta Series 2. In what would be the company’s glory years this machine led the way.

As the 1950s came to a close and the new decade was welcomed in, it was a time when Innocenti was at its greatest. Sales of the Lambretta had reached new levels both home and abroad and it seemed that nothing could stop their domination of the two-wheeled market. A new model was on the horizon and if it was a good as predicted then this would make the company even stronger. Labelled simply as the series 2, it would be made available in three different variants, starting with the budget Li 125 followed by the standard 150 and finally the most powerful of all, the TV 175.

The design was a natural progression from the series 1, but it offered far more than just a few upgrades and involved several significant changes. The most notable was the design of the headset. For the first time ever on a Lambretta, the headlamp would be housed in the headset. More importantly, it would turn with the handlebars. Up till that point, all Lambretta headlights were in a fixed position below the headset. This new design would allow far greater vision when driving at night and was deemed an important safety feature. Other improvements were to the engine with a revised cylinder layout on all models to increase power slightly.

Though there were other slight changes, none were as drastic as the headset. Innocenti, it seemed, didn't want to alter a winning formula too much and upset their customers. Though the series 2 was an improvement over its predecessor it wasn't that much different in its appearance. A clever move, as it has been proven over time that changing something too much can drive the public away.