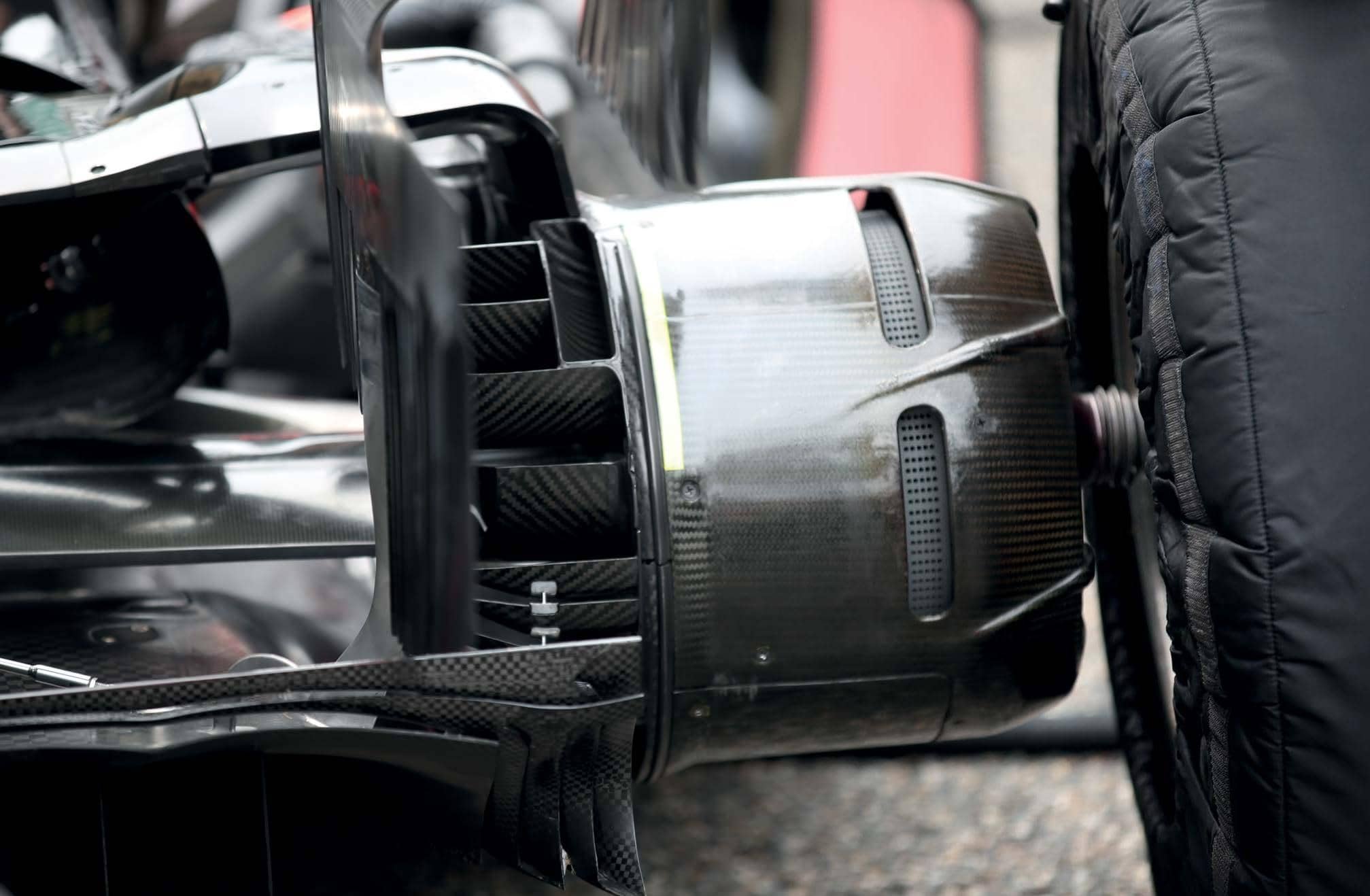 F1 teams are known to be utilising brake cooling for rim heating, tyre warming, and even additional aero performance. But just how do they do this?

There is a reason why the F1 pit lane is obsessed with tyres, and it’s because tyre management is the single biggest performance differentiator between all the teams across the grid. You can have all the horsepower and downforce in the world, but if you can’t transform that load into tyre grip, you will forever lose lap time.

Teams use every trick in the book to not only try and bring the tyres up to their optimum working temperature, but to maintain that temperature throughout the race. The latter is particularly challenging because as the rubber wears away during longer stints, there is less tread to generate that internal heat, and tyre carcass temperatures decrease and drop out of the working window. When engineers say tyre management is a ‘black art’, they are not joking.

‘The tyres have a very narrow working window, and it is a real challenge to keep them in that window from start to finish of a stint,’ says Andrew Green, technical director at Racing Point. ‘It’s easy to go over the working window at the beginning of the stint, and it’s easy to fall below it by the end. Trying to keep the tyres in that middle region, and all at the same time, is what we aim for. We don’t get it right all the time. If I’m honest, we hardly get it right at all.’ 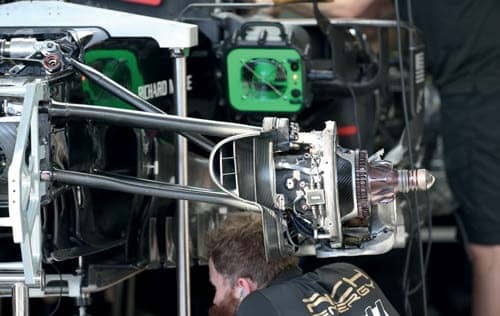 One of the key tactics to managing this sensitive rubber is to utilise the hot air that has been used to cool the brakes to transfer heat to the rim, which then radiates that heat through to the tyres. This rim-heating effect is not revolutionary, and has been used by teams for many years, across many categories. However, with the 2019 regulations reducing the window of opportunity for aerodynamicists, and the tyres continuing to be so temperature sensitive, this continues to be one of the key areas of development.

With each team’s design different to the next, it appears no one on the Formula 1 grid has quite found the optimum solution yet. At each corner of the car lies an intricately packaged wheel assembly, the primary structural part of which is the upright. This is where the brake disc, as well as the wishbones and pushrods of the suspension, are attached to. The upright also carries the stub axle and the bearings, which is effectively what the wheel is bolted to.

‘The design of the upright has become increasingly affected by the need to feed cooling airflow to the brake disc,’ explains Ben Agathangelou, head of aerodynamics at Haas F1 team. ‘When I started, the upright was a triangulated bit of metal that held the wishbones, but it has now become a more integrated design to meet the aerodynamic cooling flow demands. We use FEA to ensure the structures [of the upright] that are compromised by aerodynamics can satisfy the necessary limit or fatigue loads, but you’re consciously compromising the ideal in order to satisfy the aerodynamic side of the equation.’ 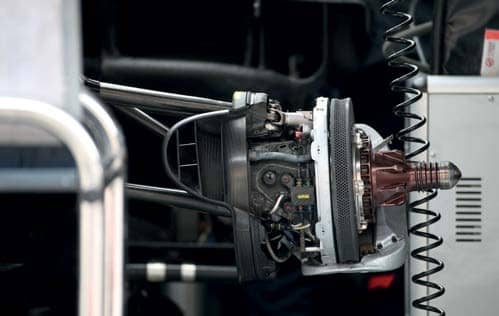 Then there is the braking system, which has seen significant changes this year to cope with the more restrictive aerodynamic rules of 2019. Simplified wings have led to a decrease in downforce, but an increase in top speed and reduced aerobraking force. Therefore, the brakes have to do more work to slow the car down, resulting in more energy to dissipate.

Keeping the brakes cool is a continuous battle for the designers at the factory, the engineers on the pit wall and the drivers out on track. Like tyres, brakes have a working window and if either the calipers, brake fluid, pads or discs overheat, brake performance can fade, affecting driver confidence and lap times.

Carbon discs wear by a chemical process called oxidisation. Carbon breaks down in the presence of oxygen and this oxidised material turns to clouds of black dust, which you can sometimes see during heavy braking. This wear rate is non-linear and after a certain temperature can become exponential. As the disc wears, there is less material to absorb the braking energy, so the disc becomes less efficient and therefore hotter, increasing the risk of further oxidisation. 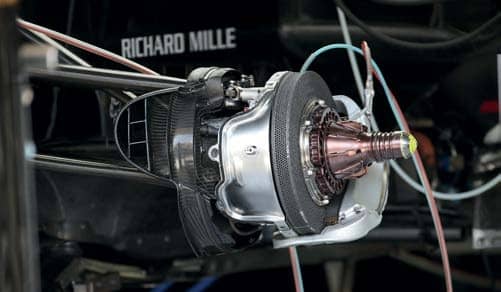 ‘To cope with the increased braking demands [of 2019] we have improved a new drilling pattern for the front discs with 1500 holes, seven layers of them,’ highlights Giovanni Clemente, Brembo Racing F1 race engineer and telemetry data analyst. ‘Those discs have been introduced specifically to cope with the demands of the new cars, and we will use them at the toughest tracks for us like Bahrain, Abu Dhabi, Singapore, Canada and Monaco. So those are available to teams, along with versions with 800 holes and another with 1200 holes.’

The temperature of the brake pads also has to be maintained, as overheating the pads can drastically affect the coefficient of friction between the pad and the disc, giving the impression of brake fade. ‘There are different patterns for brake cooling with the pads too, but the design priorities are a bit different as the pads play a key role in the stiffness of the whole system. The key with the pad drillings is not to reduce the overall stiffness when compressed [between piston and disc], and for 2019 we have brought in some new patterns and new shapes. This was a lot to do with the way different teams decided to split the heat between the caliper, the disc, the tyre and the rim.’