Seven years ago, I started a small movement that would take my team at OVERDRIVE and some very special cars from our partners in crime, Audi, on a journey deep into Ladakh. Accompanying us on this journey would be a few privileged participants, who would get the opportunity to experience first-hand the process of content creation. The intent was to raise the flag at strategic places along the Indian border, considering we shared them with not entirely friendly neighbours. This was a very civil act of sticking a pole to them, a pole that held the Indian national flag at the upper end and a bunch of patriotic adventurers, exploring the northern borders of the nation, holding up the other.

In 2019, a whole new bunch of crazies jumped on to the Independence quattro bandwagon. Most from the south of India, while some others joined in from various other states of the country. Over the years, the diaspora of our little adventure community has encompassed the diversity of India. I love how the thrill of a good road trip makes ordinary individuals come together as compadres, amigos, bros! A road trip, in Ladakh especially, brings out the best in each other, aiding, abetting, bonding together like the world has no tomorrow! It elevates every Independence quattro drive to a special place! 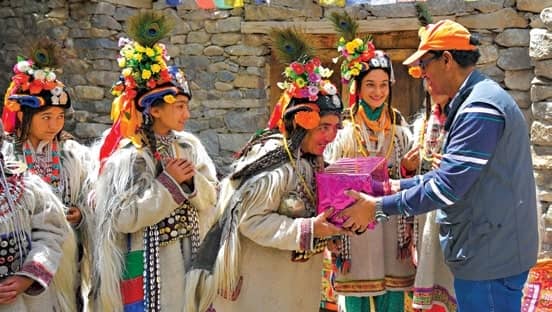 Our destination this year was the little known Batalik sector. Batalik received very little coverage during the entire war, with good reason. Getting to the lofty heights around this sector meant an arduous 18-hour trek spread over three days amidst shelling for the reporting media. It was easier to simply drive to Kargil and Drass and bring frontline stories from there. So in a sense Batalik, despite having some of the hardest battles fought there during the Kargil War did not get its due in the mainstream media.

Batalik is also known for the Brokpa tribe. The people belonging to this tribe reside in four villages in the Batalik sector namely, Dah, Hanu, Garkon and Darchak. The Brokpa’s are believed to be direct descendants of Alexander the Great’s soldiers and it is said that they have pure Aryan blood running through their veins. What is immediately apparent is that the people in this region certainly have much sharper features than anyone else in India. Dazzling coloured eyes, prominent noses, high cheekbones, broad foreheads, large palms, tall and imposing, that’s the men. I’m not even going to begin describing the women, said to be the most heartachingly beautiful in all of India. It’s true! But we weren’t here to examine the demographics of the region, we were here to plant the Indian national flag on our Independence Day. And to do that we selected a site at roughly around 12,000 feet above sea level, very close to the Chorbat La, a high altitude pass that sits at around 16,866ft above sea level and connects Ladakh to Baltistan in Pakistan.