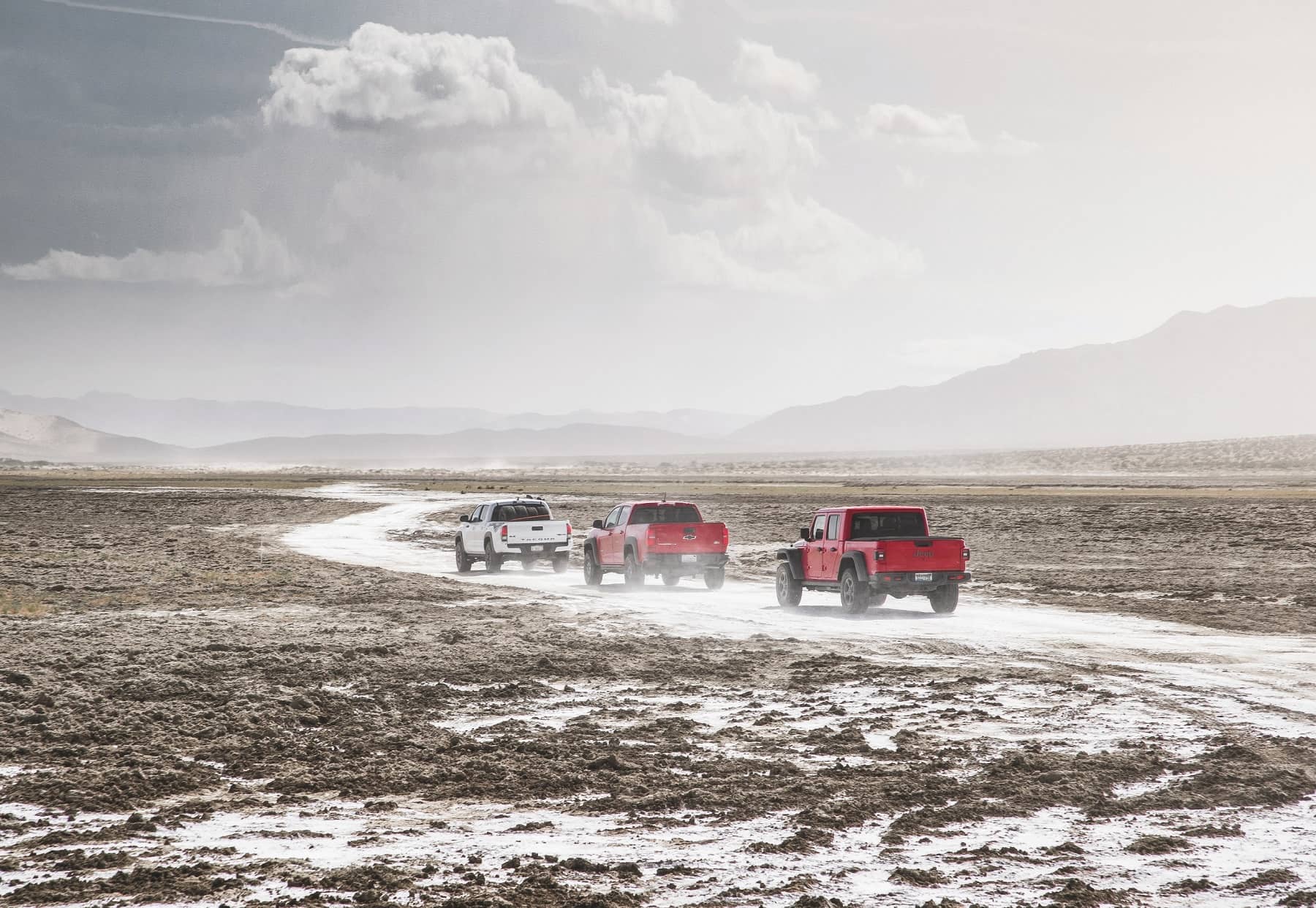 We send the Jeep Gladiator, Toyota Tacoma, and Chevrolet Colorado to tackle one of America’s toughest overland trails

Ferocious winds ripped across the undulating plains of the Mojave Desert, battering our brave little overland convoy. We had been battling scorching heat, freezing mountain air, and 60-mph gusts for the past 150 miles—all of which we’d attacked off-road. With my 2020 Jeep Gladiator Rubicon assaulted by this insistent blast for hours on end, I had long since passed the point of exhaustion.

Ahead of us, a sea of greens, blues, and yellows emerged from the bland desert scrub, welcoming our weary eyes. The Mojave River, fed by record winter rains, flowed mightily. On the other side, the end. Pavement. A warm hotel bed.

I pulled up to the water’s lapping edge, said a prayer, and started inching my trusty Jeep forward.

Forward into the Past

About 30 hours prior, filled with gas station burritos and optimism, we were ready to pit the Gladiator, 2019 Chevrolet Colorado ZR2 AEV Bison, and 2019 Toyota Tacoma TRD Pro against one of the most spectacular Overlanding trails in America: the Mojave Road.

The Mojave Road is the closest we’ll get to a time machine in our lifetimes. The “road” Barstowis essentially an old footpath that linked the Mojave tribe’s homeland near modern Fort Mohave, Arizona, to the Serrano, Cahuilla, and Tongva tribes in California’s San Bernardino Valley, just outside Los Angeles. To distill hundreds of years of history into a sentence, with Mojave assistance, the trail later allowed Spaniards, Mexicans, and others to explore and migrate across the Southwest.

Today, the road’s 150-ish miles of rock, sand dunes, mountain passes, and salt flats still look much like what our forebears would have experienced hundreds of years ago. That’s what makes it one of the best overlanding trails in the country.

The Colorado ZR2 Bison, Gladiator Rubicon, and Tacoma TRD Pro are among the most capable factory off-road pickup trucks ever developed. All offer V-6s (308, 285, and 278 hp, respectively) paired with automatic transmissions (eight speeds for the Americans, six speeds for the Japanese) and four-wheel drive. All have ever-important lockable differentials, too. The Chevy and Jeep can lock both front and rear differentials; the Toyota has just a solo rear locker. Each also has its own unique off-road trick up its sleeve.

The Colorado ZR2 Bison, for instance, gets Multimatic Dynamic Suspension Spool Valve dampers aimed to make it better on-road, while rock crawling at low speeds, and while desert running at high speeds. Overland masters American Expedition Vehicles also provides some unique body armor to make it even tougher, such as boron steel bumpers and skidplates.

The Tacoma TRD Pro is built in a similar mold as the ZR2. Toyota’s TRD team outfits it for desert duty with Fox Racing Shox and a “Desert Air Intake,” which Toyota is very quick to point out is not a snorkel.

The Gladiator Rubicon follows a different path than the Bison and Taco. Although it, too, gets Fox Shox, the Jeep is designed more around low-speed rock crawling than racing across the desert. It has an electronically disconnecting front anti-roll bar for more suspension articulation, massive 33-inch tires, and the expected assortment of skidplates and rock rails.

Literally loaded to their roofs with camping gear, tires, gas, and recovery equipment, we were looking to determine which one of these midsize off-road pickups is the most adventure-friendly, the one that can best carry us away from modern civilization and eventually find it again, too. We care about off-road capability over all else here, but we’ll also consider on-road dynamics, features, and price. Sort of.

Finding the trailhead was easy. Our overland convoy of four trucks—our three midsizers with our long-term 2018 Ram 2500 Power Wagon along as a support rig—left L.A. early and was now at a nondescript pull-off about a mile west of the banks of the Colorado River.

I always get a little anxious the first time I head out onto a new trail, but thankfully we wouldn’t be navigating alone. Dennis G. Casebier’s Mojave Road Guide: An Adventure Through Time is an indispensable mile-by-mile guide of the trail. Casebier is responsible for rediscovering the trail, and starting in the ’80s, he and a group of volunteers laid out rock cairns on confusing stretches of the trail in an effort to make navigation easier.

As the clock ticked past 2 p.m., we set out. With three days budgeted for the trail, we figured we had until dark to cover 40 miles at a minimum before setting up camp and prepping for another 60 miles or so tomorrow.

Book in hand, I hopped in the Colorado, the Gladiator and Tacoma falling in line behind me. The trail starts easy as it climbs up and away from the Colorado River. I was pretty happy to be driving the Bison. Its exceptional ride and body control made it easier for me to split my focus between the trail guide in my right hand and the “road” ahead, and on the long, sandy stretches I could put the hammer down and have a little fun.

MotorTrend en Español managing editor Miguel Cortina was having a good time in the Tacoma, too. “It’s quiet and well balanced, and the suspension does a good job of keeping the body under control,” he reported.

Some ways behind us in the Gladiator, features editor Scott Evans was having an altogether different experience over the offset moguls the Bison and Taco were floating over, until he discovered the Rubicon’s anti-roll bar disconnect. Although it’s primarily designed to help keep the Jeep’s front tires on the ground during extreme articulation, it has the added benefit of significantly softening the Gladiator’s ride.