Updates on our long-term fleet

EPA City/Hwy/Comb Fuel Econ 29/39/33 mpg “The unassuming Sentra isn’t the dull practicality-mobile I once thought it was.” Claire Crowley

Remember the fortunetelling game MASH, named for your equal odds at one day living in a mansion, an apartment, a shack, or a house? In the late 1980s, with our bangs AquaNetted to high heaven, my girlfriends and I often played a competitive round to break up the tedium of giggling and listening to Axl wail away on Appetite for Destruction. In addition to your home, MASH also foretold your career, your marriage partner, the number of children you’d have, and the car you’d drive.

Many a time did I pray I’d become a model, living in a mansion with Josh Cooper, heartthrob of the seventh grade, and our six adorable cherubs, whom I’d somehow usher to daycare in my Ferrari. Of course, it was just as likely you’d end up a garbage collector living in the shack with the boy we all knew had cooties. He’ll remain nameless here, but I looked him up recently, and he’s a superstar attorney—and probably lives in a mansion, with a model.

As for the booby-prize car, my clique and I thought it was a scream to doom each other to driving a Yugo or Ford Pinto. I never knew why, but the Nissan Sentra almost always ended up in our pool of possible cars. We didn’t exactly want to drive it, but it wasn’t that bad, either. It was average, conventional, utilitarian, plain. Think of it as an analog to the apartment. 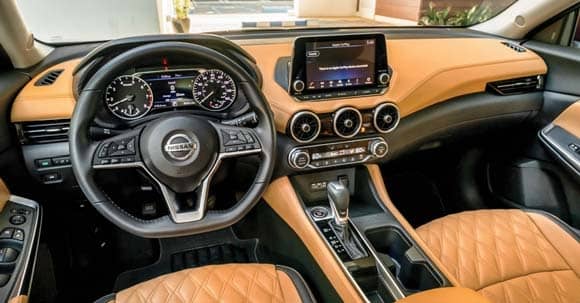 So when I learned I’d soon become the chaperone of my first long-term vehicle, I was instantly clocked with a sense of foreboding. When the Sentra rolled up on my driveway, karma had a well earned laugh.

Nissan’s best-selling model ever was born in 1982, but the eighth-gen Sentra is miles apart from those 1980s models in terms of design. Gone is the boxy shape of the early generations; the bulbous form of the previous generation is nowhere in sight, either. After a complete redesign for the 2020 model year, the Sentra is now slender, sleek, and swoopy, emulating its Maxima sibling. Its floating roof and raked rear window lend the car along, streamlined appearance. The length doesn’t all come from design, though. Compared with the 2019 model, the Nissan has grown 0.6 inches in length. In fact, the Sentra, like many of us, has grown steadily over its 38-year life. It was considered a subcompact until its fifth generation in 2000 when it was reclassified as a compact.

As part of the redesign for the 2020 model year, Nissan moved the Sentra from the V platform—an updated version of which now underpins the Versa and Kicks—to the CMF-C/D platform, shared with the Rogue and Rogue Sport. The updated Sentra gets multilink rear suspension; I’ll have more on its ride and handling in future updates. For now, I’m working from home and not driving as much as usual, but I’m enjoying the reassuringly firm ride.

Nissan sent us the SV trim, which sits square in the middle of the three-trim Sentra lineup and starts at $21,195. The real goodies come with our $2,460 SV Premium package, which includes 17-inch alloy wheels, a power sliding moonroof, thin LED headlights, heated front seats, and a six-way-adjustable driver’s seat with two-way power lumbar adjustment. In my short time driving the Sentra, I’ve thoroughly enjoyed the cozy, supportive driver’s seat. Other personal favorites are the leather-wrapped, slightly squared-off steering wheel, 8.0-inch touchscreen, knurled knobs for volume and temperature adjustment, and the rear-seat USB port, which enables my son to charge his own device and thus saves my sanity. At the top of my list of favorites in the Sentra, though, is the knockout diamond-quilted leather seats with tone-on-tone stitching. They feel luxurious and smell incredible, and the tan color, which I’ve dubbed Butterscotch, is downright yummy. It’s a good-looking complement to the Rosewood Metallic exterior color, a deep, gorgeous auburn.

My time with the Sentra has only just begun. Will my lasting impression remain as positive as my initial reaction? How will longer stints behind the wheel compare once we move back into MT HQ? Will the Sentra prove to be the car I should’ve given more of a chance when I was a snotty preteen? Will Josh Cooper invite me over to his mansion? We have a year to find out. 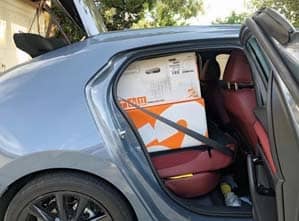 “We put our 2020 Mazda3 hatchback’s cargo space to the test.” Erick Ayapana

After a long stint in the body shop, our longterm 2020 Mazda3 hatchback needed to make up lost time and miles. I handed the keys over to staff photographer Jade Nelson, who has been keeping our handsome hatch pretty busy in the last month or so, not only for photoshoots but also as a parts hauler for his new (to him) E36 BMW M3. 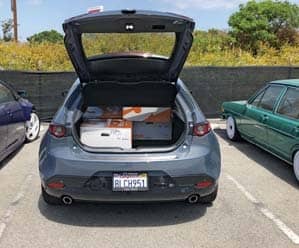 His biggest haul was a new set of wheels. Would our Mazda3 be up to the task? The idea of stuffing in four 18-inch wheels initially made me nervous with thoughts of scuffs to the 3’s fancy red leather trim and rear bumper, but thankfully this set was still new in the box. Additionally, our car was specced with the optional bumper guard that adds a layer of protection, and its brushed metal finish gives the rear end a more polished and premium look. It’s also just $100, making it a no-brainer.

Jade initially hoped to fit two wheels in the cargo area and two in the back seat, but the space between the wheel wells wasn’t quite wide enough. So to get everything to fit, he needed to fold down the rear seats, allowing him to take advantage of the Mazda3’s 47.1 cubic feet of cargo space. That’s slightly better than the Civic hatchback’s 46.2 cubic feet but tighter than the Volkswagen Golf’s cavernous 52.7-cubic foot interior. The Mazda’s sharply raked hatch likely chipped away at valuable space, but would you look at it? The stylish rump is worth it.

Although most of us agree on the Mazda3’s good looks, one staffer has taken issue with the center storage bin, which he claims is awkward to access. Opening the lid is a two-step process—you must first slide it back a few inches before lifting it open. According to Mazda, this moves the lid’s pivot point to a more ideal spot, which shortens the distance needed for your arm to lift open the lid. Yes, it's awkward at first, but it's easy to get used to. 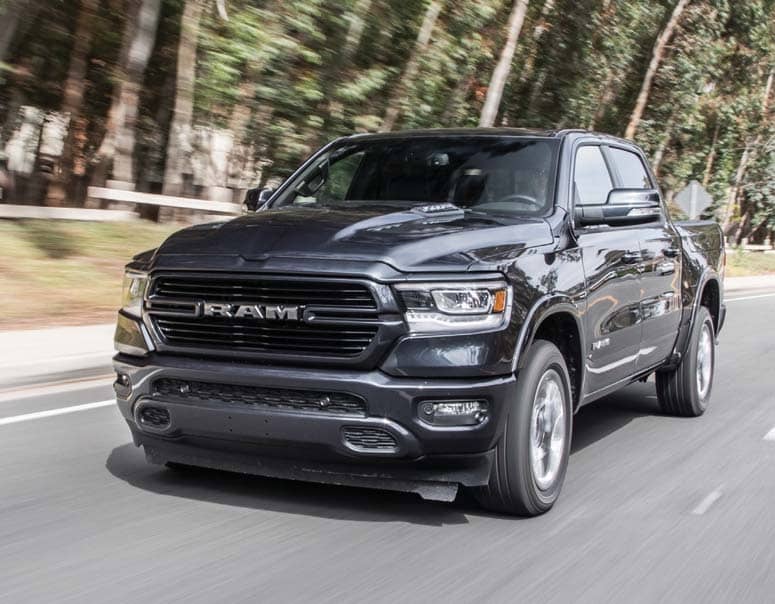