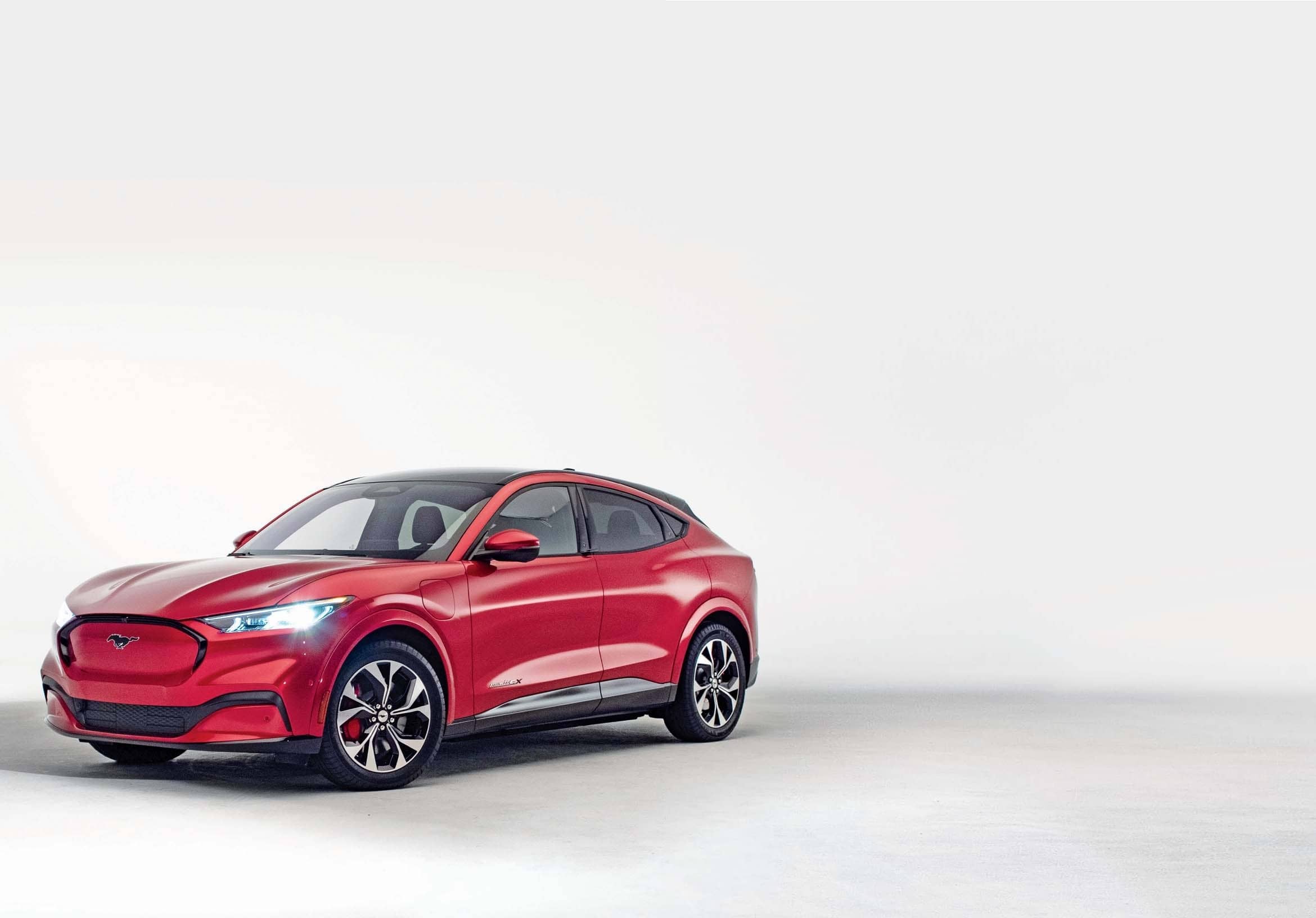 THE MOST EXCITING NEW CARS, TRUCKS, AND SUVS COMING IN 2021 OR LATER, ALL IN ONE PLACE

Everything seems to be changing by the hour as the global health crisis completely upends the way the world works, but while automakers are making face masks and ventilators today, the core of the business—designing and engineering cars to (someday) sell—continues apace. It may be happening in home offices, but these machines are just too complicated and important to completely shut down research and development and restart it later. Plus, suppliers have been contracted to make everything from shock absorbers to stamping dies—and they need to get paid.

The cars on sale today and coming to a dealer near you in the next year have been in development for the past five to 10 years. The ones you’ll be able to buy a few years from now are already deep in the development process. Cars you won’t be able to buy for the better part of a decade are already being approved, with a design freeze in progress. This industry runs on a multiyear cycle, so even when it’s disrupted, there’s always more on the way. One note: Near-term arrival dates are subject to change based on the duration of quarantines in various regions.

From the SUVs, trucks, and cars already confirmed for production when the factories reopen to those waiting to have the sheet pulled later this year and the ones still in the concept phase, we have more than 50 of the most interesting, exciting new vehicles coming to your streets and driveways. Endless SUVs, radical trucks, cars of the future, and all manner of cleaner, safer technology are coming, and you get the goods on all of it. 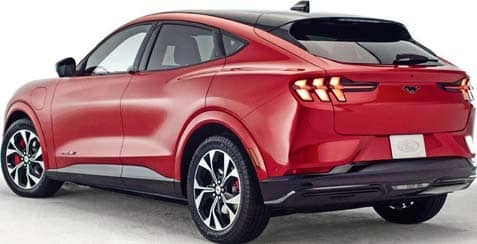 What’s New: The latest addition to the Mustang model line is a battery-electric four-door SUV. Really. Although the Mach-E looks nothing like any Mustang before it, the Blue Oval’s EV certainly packs the straight-line punch to woo pony car fans. The most powerful model—the nearly 460-hp three-motor Mach-E GT—aims to scoot from 0 to 60 mph in 3.5 seconds. The slinky crossover relies on one of two available battery packs to power its standard rear-axle motor and optional frontaxle motor: a 76-kW-hr Standard Range pack or a 99-kW-hr Extended Range setup. Ford estimates a maximum driving range of 300 miles between charges for rear-drive Mach-Es equipped with the Extended Range battery, though a heavy right foot will surely drag down that distance. What’s Not: Save for its Mustang nomenclature, the Mach-E shares little l else with any Ford before it. When: : Late 2020 How Much: h $44,995 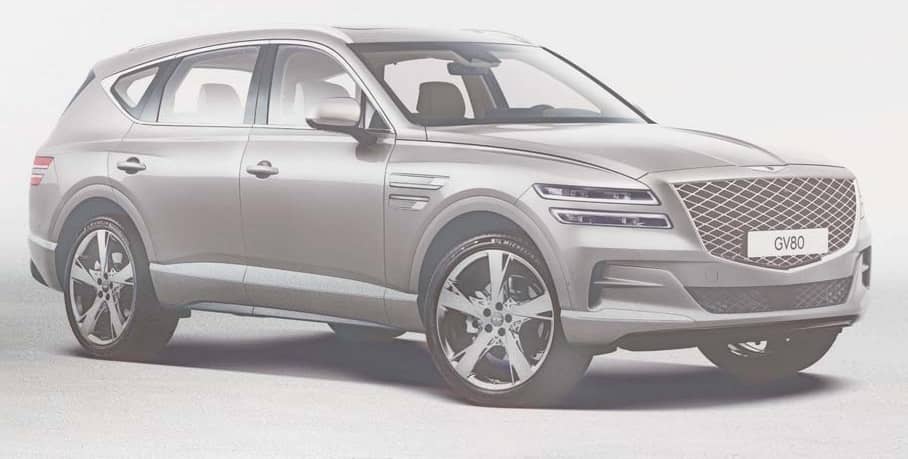 What’s New: At long last, the Geneses is bra nd’s first SUV is launching for the 2021 model year. The GV80 is a midsize, rear-drive-based SUV with seating for up to seven. The GV80 will be plenty luxurious in base form, offering extra-posh features such as diamond-stitched leather, ash wood trim, augmented reality navigation, and more at a competitive price. Engine choices for the U.S. will include a 2.5-liter turbocharged I-4 making 300 hp and a 3.5-liter twin-turbo V-6 good for 375 hp. Both engines will come mated to an eight-speed automatic transmission. What’s Not: The GV80 is all-new from the ground up, but the design hasn’t changed much from the excellent concept we first saw in 2017. When: Summer 2020 How Much: $49,925 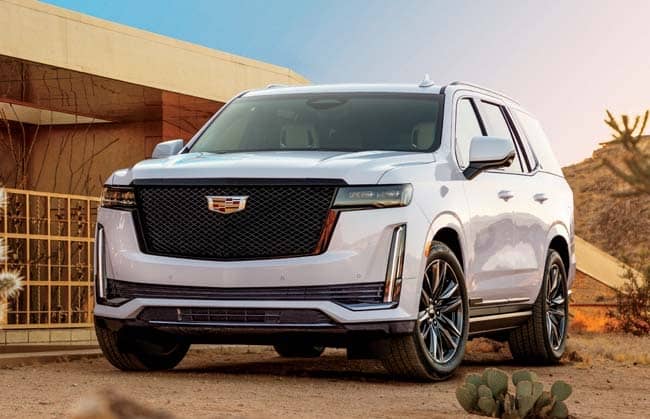 What’s New: Nearly everything, but most important: an independent rear suspension. This change, plus 4.9 and 6.8 inches added to the Tahoe’s wheelbase and length (Suburban adds 4.1 and 1.3 inches) aims to wrest dimensional and ride/handling superiority from Ford’s Expedition/Max. Fourth-gen magnetic ride control shocks are optional, with upper trims getting height-adjustable air suspension, too. There’s a 270-hp, 460-lb-ft 3.0L I-6 diesel option, and all models get a 10-speed automatic. The fancier High Country helps keep the Chevy faithful from straying to Yukon Denalis. What’s Not: The 5.3L and 6.2L V-8s continue, but with upgraded cylinder deactivation; 2500 and 3500 variants are dropped. When: Mid-2020 How Much: $50,295–$70,895 (Tahoe), $52,995–$73,595 (Suburban) 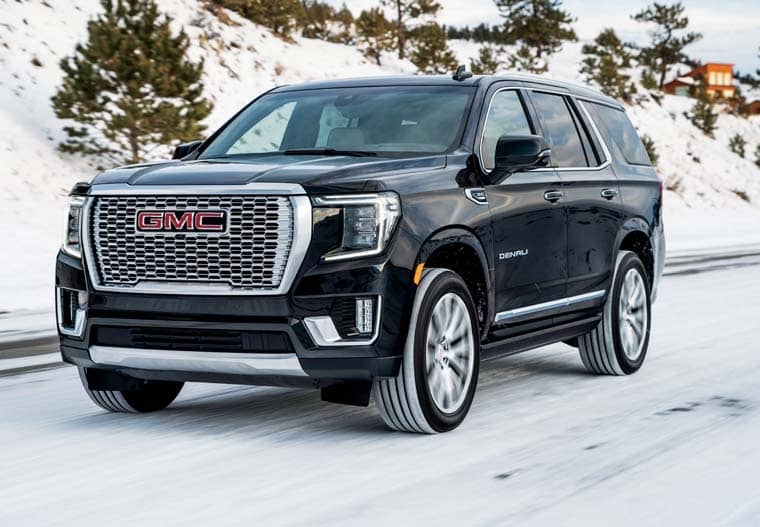 What’s New: To everything mentioned in Chevy’s Tahoe/Suburban entry, add GMC’s AT4 off-road-optimized package, which builds on Chevy’s Z71 hardware, for both Yukons. It adds Active Response 4WD electronics plus an electric-locking limitedslip rear differential, red tow hooks, and more luxurious interior trim. Denali models (60 percent of sales) get a unique dash with an integrated touchscreen—rather than one perched on top. There are also real wood inserts, a 15-inch color head-up display, four color themes, and a GMC-exclusive power-sliding center console with a “safe drawer.” What’s Not: The level of exterior bling on Denali models. When: Early summer 2020 How Much: $51,995–$54,595 (Yukon), $54,695–$75,395 (XL) 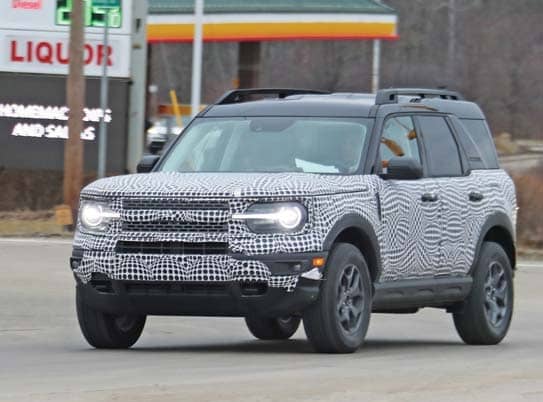 What’s New: The Ford Bronco Sport is the rugged cousin to the Ford Escape, which it shares underpinnings with. The unibody, off-road-focused compact SUV is front-wheel-drive based, but Ford considers it part of the Bronco family, and as such it shares some styling cues with the larger, body-on-frame Bronco. The Bronco Sport is expected to have the 180-hp 1.5-liter turbocharged three-cylinder as its base engine and an optional 250-hp 2.0-liter turbocharged four-cylinder engine, both mated to an eight-speed automatic transmission. All-wheel drive will likely be standard. The look is boxier and more upright than the rounded, urban Escape—with shorter overhangs, underbody protection, a two-piece liftgate, chunky roof rails, and black plastic fenders. In keeping with Ford’s overall plans, there will be a hybrid or plug-in hybrid version. What’s Not: It shares its front-wheel-drive platform and its engines with the Ford Escape. When: Late 2020 How Much: $30,000 (est) 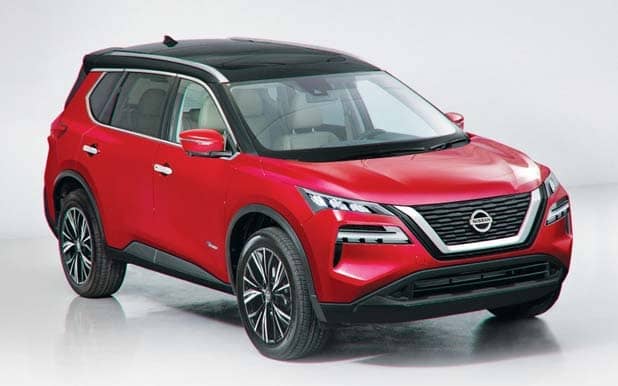 What’s New: Nissan’s best-seller is moving to a new platform shared with Renault and Mitsubishi to keep it among the top 10 best-selling vehicles in America. What you’ll see and touch has been brought into line with Nissan’s latest styling language inside and out. We expect Nissan’s latest 2.5-liter inline-four under the hood driving the front (or all four) wheels, and there’s also the possibility Nissan will put its clever VC-Turbo inline-four under the hood of a sporty model. No matter what, expect a continuously variable transmission. Inside, look for an optional digital dash and a 9.0-inch infotainment screen borrowed from the new Titan. What’s Not: Expect component sets and a fair number of its parts and features to be shared with other Nissan products. When: Late 2020 How Much: $27,000 (est) 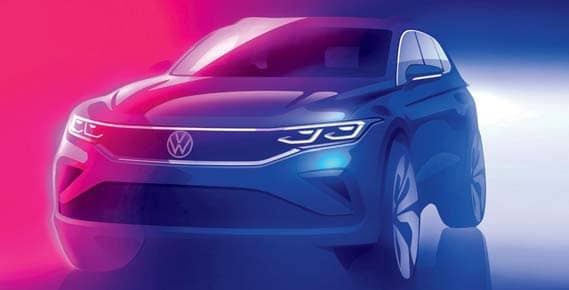 What’s New: Volkswagen’s global best-seller is due for a refresh, and you’ll recognize it right away with its sportier nose job and all-LED external lighting front and back. Inside, the Tiguan gets a revised steering wheel, borrowed from the larger Atlas Cross Sport, and VW’s latest infotainment system with over-the-air update capability. Also available: multicolor interior ambient lighting to set the mood. What’s Not: Everything else. Volkswagen is considering a plug-in hybrid drivetrain option for the next-generation Tiguan, but for now, it sticks with a turbocharged four-cylinder engine and eight-speed automatic. When: Fall 2021 How Much: $26,000 (est) 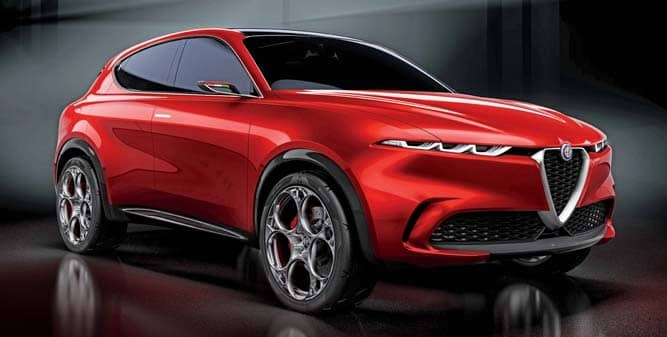 What’s New: Alfa needs to expand its lineup, and fast. SUVs are hot, so next up is the subcompact Tonale to slot under the compact Stelvio. We expect it to be front-drive based with the option of all-wheel drive, and it will use FCA’s small SUV architecture. The Tonale Concept was powered by an unspecified plug-in hybrid drivetrain, which we think could be the 1.3-liter turbo-four in front and electric motor in the rear used by the Europe-only Jeep Renegade plug-in hybrid, which makes 240 hp total. We also think the Alfa will get a non-hybrid option, probably a 2.0-liter turbocharged I-4. What’s Not: The Tonale will share a platform and likely powertrains with other FCA small crossovers, such as the Jeep Renegade. When: Early 2021 How Much: $35,000 (est)

What’s New: Although it’s a fastback version of the E-Tron SUV, with a new roof, new rear quarter panels, and a new tailgate, the E-Tron Sportback has a more carlike presence, like a tall hatchback rather than an SUV trying to look sporty. The Sportback will benefit from a number of technical upgrades from Audi designed to boost range. The front motor will disengage under normal driving, the 95-kW-hr battery’s thermal management system has been made more efficient, and the battery’s usable capacity has been increased to 86.5 kW-hr. As with the regular E-Tron, the well-equipped Sportback will be available in Premium Plus and Prestige trim levels. What’s Not: The powertrain is the same as the E-Tron, with a 187-hp, 231-lb-ft motor at the rear and a 168-hp, 182-lb-ft motor up front. Total output is 355 hp and 413 lb-ft; overboost mode gives 402 hp and 490 lb-ft for 8 seconds. When: 2021 How Much: $80,000 (est) 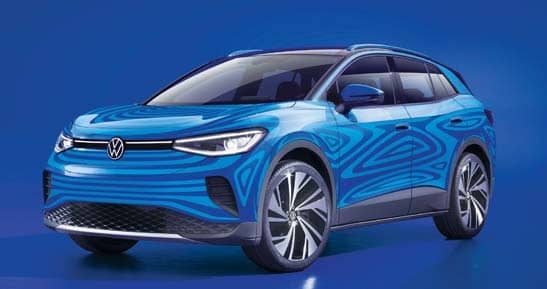 What’s New: Volkswagen has learned Americans aren’t much interested in hatchbacks, which is why the first of its all-electric MEB-platform vehicles to arrive here will be an SUV. The ID 4 is about the size of a Tiguan, but the interior is much roomier. The MEB architecture follows the now-familiar skateboard platform, with a large battery pack between the wheels and motors at the axles. The base ID 4 is likely to be a single-motor, rear-drive model, with a GTX version offering two motors, all-wheel drive, and more performance. Top-end ID 4s are expected to have a range of close to 300 miles. What’s Not: The interior hardware is shared with the ID 3 hatch recently launched in Europe, with a compact digital instrument panel in front of the driver and a large centrally mounted touchscreen for infotainment and HVAC functions. When: 2021 How Much: $35,000 (est) 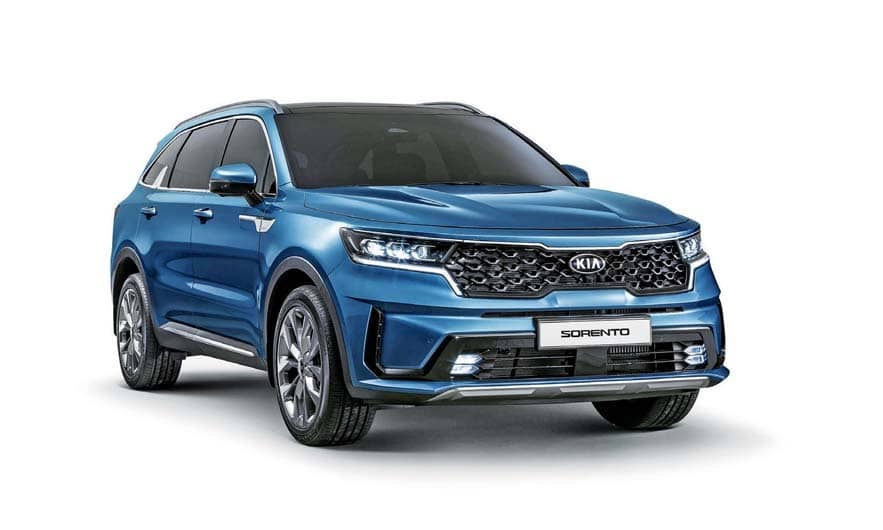 What’s New: Completely redesigned, the Sorento receives a new windswept exterior design. Kia also upgrades the interior with a large screen and sleek controls. Expect ride quality to improve now that the SUV sits on a new Optima platform. New engine options should give the Sorento an extra pep in its step. A 1.6-liter turbo-four works with an electric motor to produce 227 hp and 258 lb-ft of torque, and a 2.5-liter turbo-four makes 277 hp and 311 lb-ft. What’s Not: Some styling cues reference the Telluride, including the vertical taillights. When: Late 2020 How Much: $30,000 (est)

What’s New: The XC40 Recharge marks the debut of Volvo’s first-ever all-electric powertrain. The Recharge shares Volvo’s Compact Modular Architecture with the regular XC40, but there’s a liquid-cooled 78-kW-hr battery pack under the floor and a motor on each axle. Volvo claims 402 hp and 487 lb-ft of torque and a 0–60 time of 4.9 seconds. As with all new Volvos, top speed will be limited to 112 mph. Volvo does its own battery research and development in-house and says the available capacity of the battery pack will be 75 kW-hr, which should easily give the XC40 Recharge an EPA range of more than 200 miles. What’s Not: Apart from the blanked-off grille, the XC40 Recharge looks just like a regular XC40. That’s no bad thing, as Volvo’s entry-level SUV is one of the most stylish in the segment. When: 2021 How Much: $55,000 (est)

What’s New: Polestar 2 is the second model for the brand that spun off from Volvo to concentrate on performance electric vehicles. Polestar 1 was a plug-in hybrid, but Polestar 2 is a mainstream all-electric premium four-door sedan to battle the Tesla Model 3. The 2 will have a range of about 275 miles with the 75-kW-hr battery in the floor. Front and rear motors provide a combined output of 402 hp and 487 lb-ft of torque. A vegan interior is optional, the infotainment system uses an Android operating system to run Google automotive services, and the advanced tech allows the car to try to anticipate the occupants’ needs. What’s Not: It features an adaptation of the Volvo CMA architecture used by the Volvo XC40 and the Volvo 11-inch infotainment screen. When: Summer 2020 How Much: $61,200