FORWARD INTO THE PAST 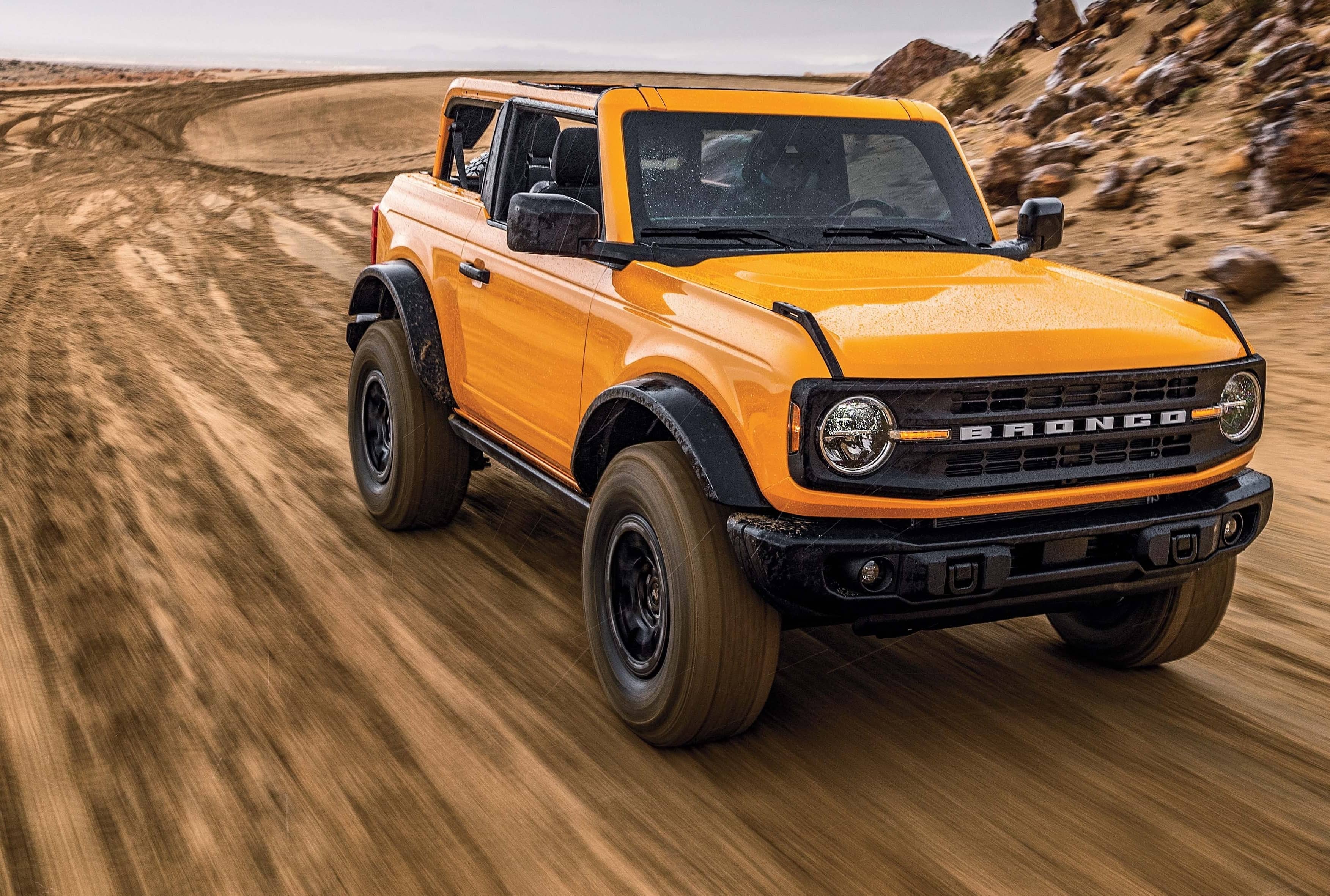 THE NEW BRONCO IS MORE THAN NOSTALGIA. IT DELIVERS THE GOODS. ANYWHERE.

Thunderclouds threaten as our group stands in the middle of Johnson Valley OHV Area, looking at two pre-production 2021 Ford Broncos. One is a Cactus Gray four-door Badlands hardtop, but we can’t take our eyes off the Cyber Orange two-door, Black Diamond, with the removable roof fully removed. It looks utterly fabulous.

A concept car come to life, driven straight off the auto show stand to an off-road paradise known for King of the Hammers. The consensus: Ford is gonna sell a million of these things. The Bronco—especially the papaya-colored small fry—just looks right on.

This new truck, available in two- or four-door styles, resembles the old first-generation Bronco from the ’60s and ’70s without being slavish. The 2021 Bronco is fresh, futuristic, fun. It looks like a kid’s toy you want to pick up and play with.

Size-wise, the two-door is 6.9 inches longer than the equivalent Jeep Wrangler on a 3.6-inch longer wheelbase, while the four-door is an inch longer on a 2.3-inch shorter wheelbase. The Broncos are 2.1 inches wider and 0.7 inch lower, and they offer similar head- and legroom with more shoulder- and hip room in the four-door, less in the two-door. Both Fords accommodate more cargo than the Jeeps—3.9–10.6 cubic feet with the seats up and 5.2–26.4 cubes more with them down, four-door to two-door. So the four-doors are close in size; the Bronco two-door is way bigger and roomier. 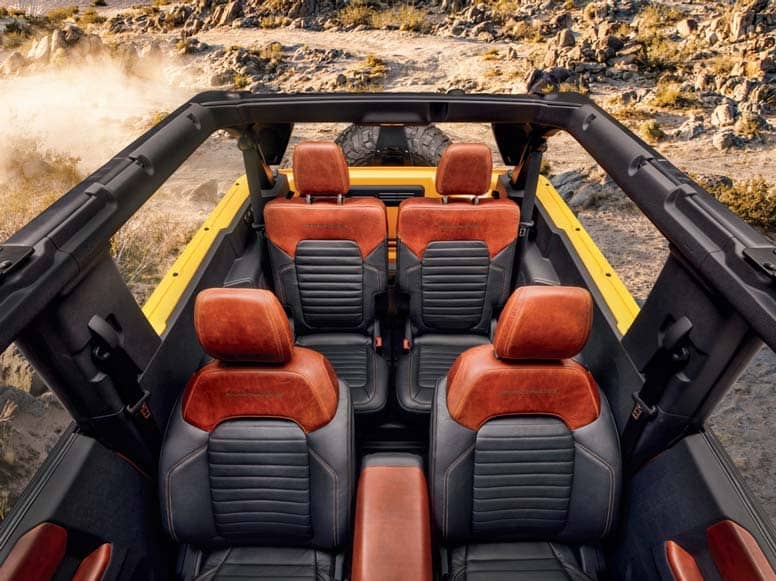 The Bronco offers three trim-specific grilles at launch, and each apes the fullwidth one-piece look of the original. The forward corners of each front fender sprout a “trail sight,” which helps locate the corners for the adventurous off-road driver and also serves as a place to lash canoes or kayaks to the roof.

One of the slickest parts of the design is the arcing bow, a curved black plastic element just in front of the windshield that contains the mirrors. See, unlike the Wrangler, the Bronco’s side-view mirrors are mounted on the body—so when the doors come off, you still have mirrors (and the optional cameras housed in each for spotting front tire placement). But rather than just have them stuck onto the Bronco’s body, Ford design gave the pair a little curved plinth to sit on.

The weakest part of the four-door’s design is at the base of the C-pillar, where many surfaces and forms collide. It all looks bunched up. It’s not horrible, but there’s a black plastic triangle just at the trailing edge of the rear window that looks tacked on and cheaper than the rest of the truck. We were assured by Ford PR the previous iteration looked even worse. Not really a confident statement, that. With the roof off, you can see the perimeter halo roll cage, which leaves the entire space open above both rows of seats for panoramic views of Moab. This structure houses curtain airbags and serves as a design element: To provide ample headroom, the roof stands about 6 inches above this, so removing it lends a chopped-top hot rod appearance.

Out back, you see exposed hinges on the tailgate, but to simplify door removal Ford chose concealed hinges for the doors. Removing these frameless, mirrorless aluminum doors is a breeze. Simply lower the windows and slip on the protective door bag. Unplug the electrical connection (a spring-loaded door snaps shut to keep the connectors clean), remove one bolt from each hinge, and off they come. One last cool little touch: The rearview camera is mounted on the end of the spare tire carrier. Said carrier is quite long, so even if you fit a fat, aftermarket spare tire and wheel, your camera can still see. 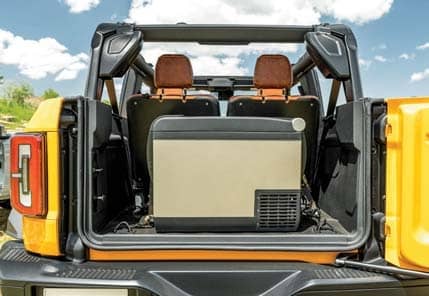 Broncos are offered with a choice of two removable hardtops. The basic one comes molded in body color and features two interlocking sections over the front seats that can be stowed on board in bags like Jeep’s Freedom Top panels. On four-door models, a third large panel above the rear seat opens the entire roof section but doesn’t stow on board. Quarter-turn latches release all these panels. The remaining roof section enclosing the rear cargo area is comparatively small and easy to maneuver, and with it off and all windows lowered, even with the frameless doors installed you get a true “max air” convertible feel.

A second modular hard top gets painted and adds the third rear roof panel for two-doors along with removable rear quarter windows for better airflow with the rear roof section attached.