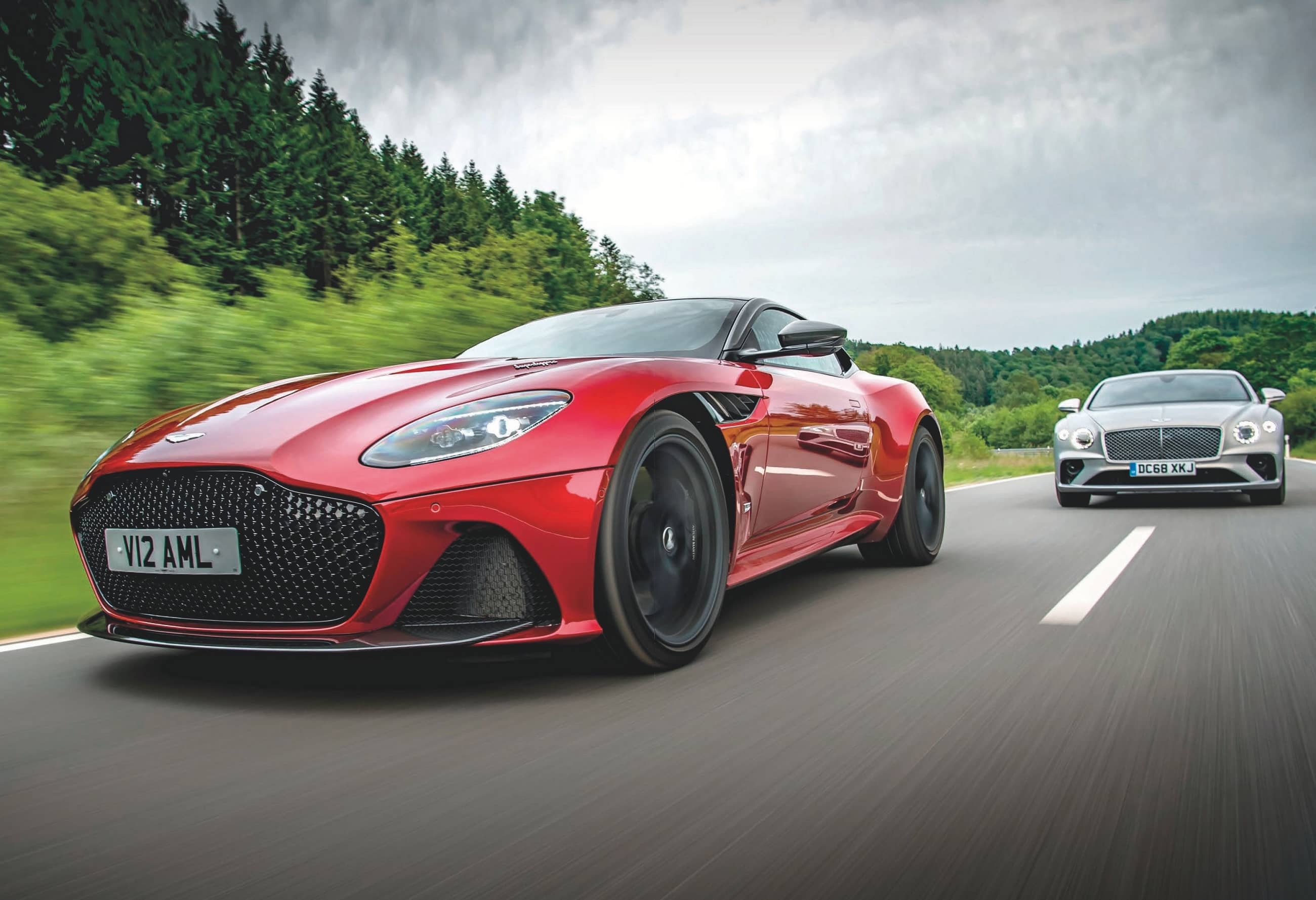 Grand Touring Never Had It So Good

Jonny Lieberman
Is there anything better than a British beast of a grand tourer? Specifically, one that’s stuffed with a 12-cylinder powerplant, covered in fist-bitingly gorgeous sheet metal, and lined with fine, sweet-smelling leather? Why, yes. Two of them.

That Aston Martin and Bentley arrive simultaneously with Union Jack–waving coupes is the world’s good fortune. That they are both outstanding reimaginings of the grand touring genre is providential.

Aston Martin comes to the table swinging the car I enjoy calling Big Sexy, the DBS Superleggera. Packing a 5.2-liter twin-turbo V-12 that rocks 715 hp and 664 lb-ft, this GT is the best design of the last 50 years and a veritable rocket ship.

Of course, the Bentley Continental GT ain’t no shrinking violet. New from the ground up, the muscular Conti comes complete with a 626-hp, 664-lb-ft twin-turbo W-12. The Bentley is down on power compared with the Aston, but the former’s all-wheel-drive more than makes up for the deficit. I also happen to think the Bentley looks quite fabulous.

What a matchup, eh? Opportunities like this are why I got into this business. I haven’t even mentioned driving around Spa, the Nürburgring, or attempting to hit 200 miles per hour on the autobahn. Yet.

These two cars are fantasy objects for the obnoxiously well-heeled. The starting â€‹price of the Bentley is right around $220,000, whereas the Aston Martin is dearer at $308,081. Note these prices contain the caveat, “starting.” It’s hard to nail down the exact as-tested price for the Bentley (and the plummeting English pound exchange rate could affect them both—perhaps the only side benefit of Brexit). But it’s safe to assume that as shown here, it’s dripping some $50K worth of extra bling, likely much more.

Therefore, the focus of this article is much less “here’s what you should buy” and more “here are but two of the options available to you, sir,” with a dash or two of “… damn rich people” tossed in just so we don’t forget our stations in life.

Our plan: Drive from England to France to attend the Great Race, the daddy and granddaddy of them all, the 24 Heures du Mans. That’s Le Mans to you and me, bub. Bentley was kind enough to drop the silver Conti at Head 2 Head co-host Jethro Bovingdon’s house in Northamptonshire the night before we left. I had to go fetch the DBS from the Aston Martin Works facility in nearby Newport Pagnell.

By “had to,” I mean I got to once more visit Newport Pagnell, an amazing living museum across the street from the original location of Aston Martin’s factory. Inside I saw everything from two of the 77 One-77s ever made to two of the 99 Zagato Shooting Brakes. I saw one of the original James Bond DB5s from Goldfinger and the English wheels upon which the metal for almost every Aston Martin was hand-formed until the brand was bought by Ford Motor Co. Perhaps more impressive was one of the 40 twin-supercharged 1999 Vantage V600 Le Mans that Aston Martin built to celebrate the 40th anniversary of its 1959 overall win at Le Mans.

Quite the place. There, parked just in front of that 600-hp brute, sat a Hyper Red, 715-hp DBS Superleggera. Ours for the week.

Merely driving across France in these two luxury bruisers would constitute a bucket list item for most folks. However, Jethro and I are in the bucket list item creation department, so we decided to leave a bit early, miss all the Chunnel and A28 traffic, and see what Belgium had to offer. Aside from a 400-mile start to our trip and the glassiest-smooth roads you ever drove on, not much. The doldrums before the storm did provide us a chance to evaluate the Continental and the DBS as grand touring machines. Easy winner here: Bentley.

The Aston Martin is perfectly adequate as a long-distance cruiser. Comfortable enough seats, sufficiently fine ergonomics, a decent ride, and good-enough infotainment (Mercedes-sourced, though previous-gen, electronics). The cabin is OK, and most humans wouldn’t even think to pick nits, though there is a homebrewed quality to it (and all other Astons) that is simply not found in the Bentley.