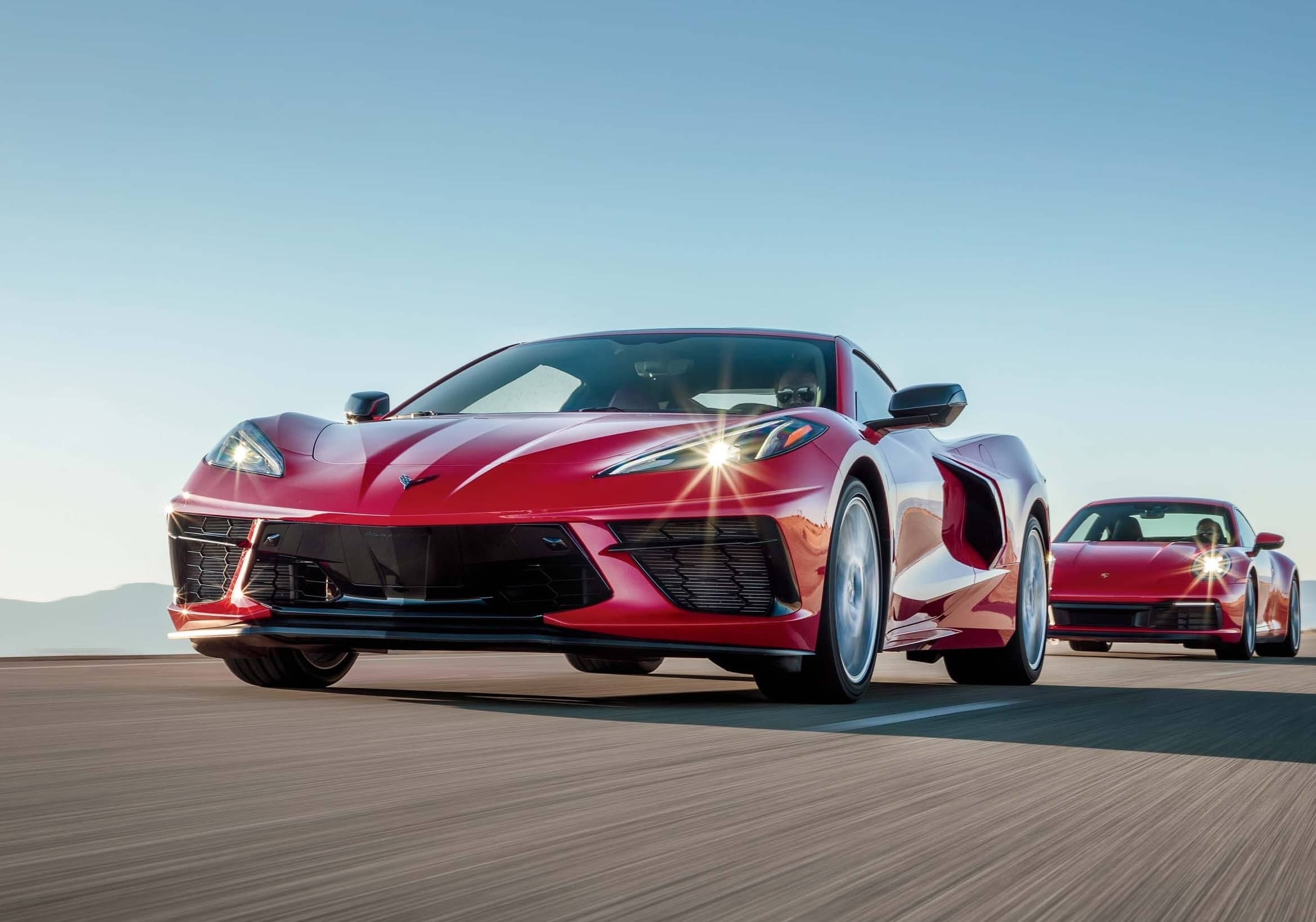 SCOTT EVANS
Last corner. Hairpin, zero camber. Be patient with the throttle, or it’ll just push. Start to unwind the wheel, roll hard into the throttle. Let all that weight out back dig in and put the power down hard. Front straight, lap Vmax will be the instant before you brake. Keep your foot in it, keep your nerve. A little farther, a little farther, now maximum brake. Too far, too late. Not slowing fast enough, briefly fixate on the weeds you’re destined to meet. This isn’t going to end well.

No, knock that off. Look where you want to go, turn but don’t lift, hope ABS does its job and lets you brake and steer at the same time—or else. Like magic, it’s turning! However, new problem, the rear end is coming around, fast. Countersteer before the engine passes the driver … What car is this?

A year ago, there’d be no doubt. It’s an ass-engined Porsche we’d be talking about. Then Chevrolet went and did the thing we’ve been saying it could and should for 60 some-odd years: It put the engine behind the driver. The mid-engine Corvette is real, and I’m driving it. Or am I driving the new 992 Porsche 911? They’re the same shade of red and have nearly identical performance. They even have similar rear weight biases. And that’sjust to start. One thing that still remains entirely separate: their prices.

Nearly everything about the 2020 Chevrolet Corvette Z51 and 2020 Porsche 911 Carrera S is effectively equal—on paper. The Corvette is 3.9 inches longer, 3.2 inches wider, and 2.2 inches lower, but you’d barely notice with the two parked next to each other. Their side profiles are nearly identical; the roofline, front fenders, and A-line (the primary character line connecting the front and rear fenders below the windows) are almost carbon copies.

The Corvette is 253 pounds heavier, owing in part to its top-trim 3LT interior, and it carries 61 percent of its weight on the rear wheels to the 911’s 64 percent. The Corvette’s 6.2-liter V-8’s 52 extra horsepower offset its extra weight for a superior weight to power ratio of 7.3 pounds per hp to the 911’s 7.6.

The 911’s turbocharged flat-six is down 80 lb-ft of torque against the ’Vette, too, but you wouldn’t know it from the stopwatch. Be it 495 American ponies and 470 lb-ft from eight free-breathing cylinders fed to a Tremec eight-speed dual-clutch auto or 443 German thoroughbreds and 390 lb-ft from six pressurized pistons behind a Porsche eight-speed dual-clutch, you’re getting to 60 mph from a dead stop in less than 3.0 seconds.

With the Porsche, it takes only 2.9 seconds, but the Corvette needs just 2.8, making it the quickest factory Corvette to 60 mph in history. The advantage carries through the quarter, the Corvette trapping in 11.1 seconds at 123.2 mph and the 911 in 11.2 seconds at 124.3. And these are essentially the base versions of each car.

Oddly, the Porsche looks and feels quicker. Something about the midrange oomph provided by the turbochargers gives the 911 a feeling of supercar urgency, from a stop or a roll, that the ultra-smooth Corvette lacks. The ’Vette’s big V-8’s power delivery is so smooth and so consistent everywhere in the rev range that it never feels like you’ve just hit hyperdrive. The cabin is so isolated that you never feel like you’re going as fast as you are. It just goes.

Provided it has grip, of course. We found the Corvette much more sensitive to the road surface than the 911 despite equally good launch control systems, which can cost precious tenths when your pride is on the line. If you do lose by a nose, just remind everyone you have “burnout mode” by grabbing both paddles, giving it the beans, and releasing the paddles to dump the clutch for a smoke show. Porsche people have to buy a GT3 at half again the cost to get that. 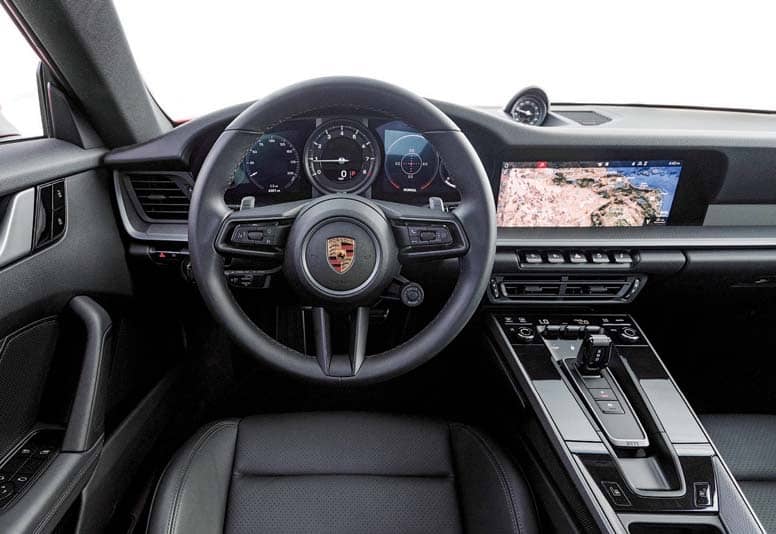 It isn’t just the rear end of the Corvette that is sensitive to grip. Even with slightly stickier Michelin Pilot Sport 4S rubber to the 911’s non-Corsa Pirelli P Zeros, the Corvette manages 1.04 average lateral g on our skidpad to the 911’s 1.09.

The Corvette’s default limit-handling behavior is big, fat mid-corner understeer, and it shows in the figure-eight laps. The Carrera laid down a truly blistering 22.7- second lap at 0.94 average cumulative g to the Corvette’s significantly slower 23.3-second lap at only 0.90 g. That’s just barely quicker than the previous generation’s Z51, which figure-eight master Kim Reynolds always found to be an unpredictable mess in this test despite the numbers it put up. He finds this new car communicative, responsive, and easy to drive (despite said understeer).