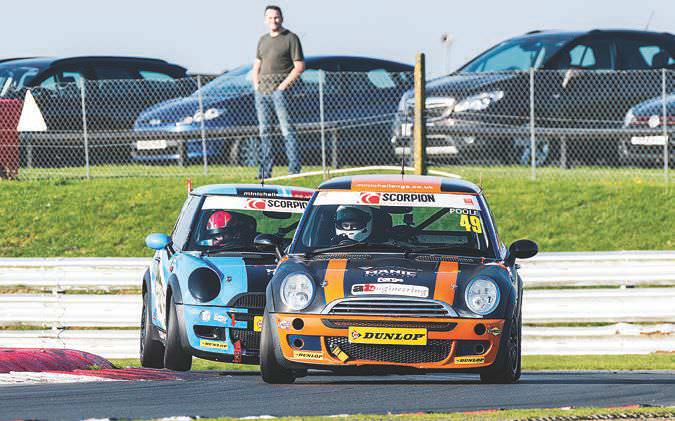 Expectations were high for the outcome of the Cooper Pro and Am Classes of the MINI CHALLENGE, and the pressure was on to bring home enough points to claim the Class wins in both classes.

Race One saw Sam Weller pull away by over a second on his first lap. Matt Hammond also started well with Martin Poole and Jessica Hawkins slotting in behind. They kept that order for most of the race, until Sam’s lead was attacked and reduced in the penultimate lap by a late lunge by Martin on Matt and Richard Newman going into Coram. By the time they all arrived at Murray’s, Jessica had capitalised and grabbed a much-needed P2.

Meanwhile, Owen Walton’s out-of-line front wheels forced him to retire, and Rob Butler in the Guest Class also retired, while Daren Chatt’s day just seemed to get worse as his chance of a win in the Directors Cup seemed to fade away.

In the Am Class, Stuart McLaren got his win over Chris Middleton and Gary Papworth while Ethan Pitt, in the Guest Class, drove well and kept Mark Cornell and Darren between himself and Bryony King. There was no damage to any cars, no safety cars and it was a great watch for all the spectators.

With the Am Class decided in favour of Stuart McLaren it was still all to play for in the Race Two Pro Class.

MORE STORIES FROM MODERN MINIView All