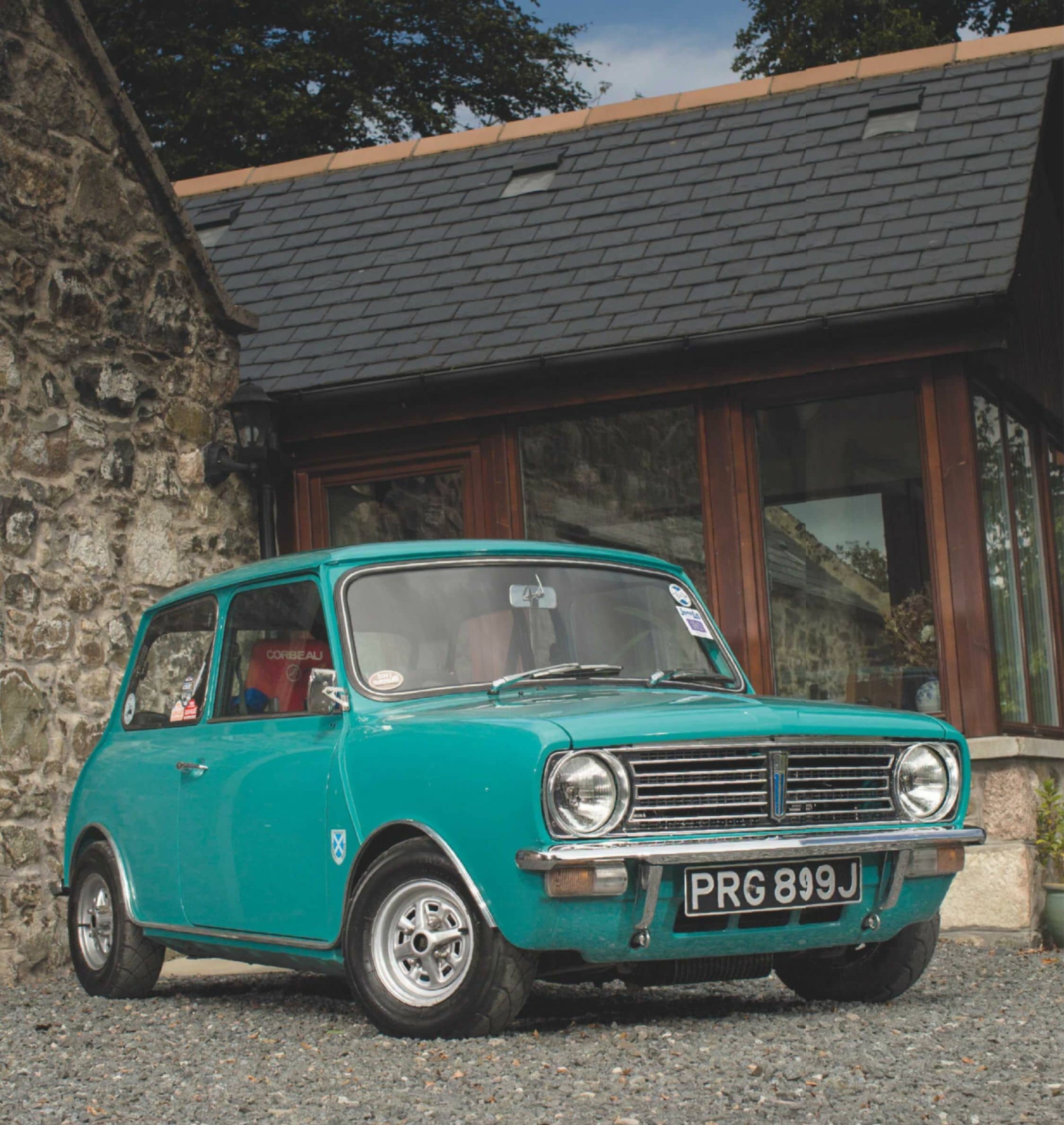 This early Clubman was destined for a tough dual-purpose life as a daily driver and international competition car but a thorough restoration has given it a surprising third role, as a prize-winning show car.

Malcolm Milne has been surrounded by Minis for most of his life. Starting with the 1969 Antelope Clubman that his mother owned, learning how to drive in a Mini and then getting his licence in one. In fact, the first car Malcolm ever owned was a 1966 998 Morris Cooper. By 1991, when he was only 23, that all came to an end. His car, by that time, was a 1976 Mini 1000 that had evolved into a 1380 tarmac rally car. He’d entered it in a single-venue rally at Prestwick Airport and managed to triple roll and destroy it during the competition. Fortunately, he was able to walk away from the incident but the Mini was beyond help.

Over the past 30 years Malcolm has either owned or borrowed competition cars, successfully competing in sprints, autocross, tarmac stage rallying and forest rallying. As a self-trained mechanic, he was able to do a lot of hands-on work with his cars, which keeps his running and modification costs to a minimum.

By 2008 the Mini bug was still there though. After 17 years Mini-free he decided it was time to start looking again. By then he was a family man and was looking for something that could cause a bit of stir in hillclimbs but remain roadworthy. “I’d been looking for a classic for a short while. It didn’t necessarily need to be a Mini. It later transpired that my wife had considered finding me a Mini for my 40th birthday, the year before, but had scrapped the plan when I’d bought myself a 1600 Vauxhall Astra rally car.”

By continually keeping a lookout on eBay, he found the Clubman. “Prices for Clubmans weren’t so dear at the time and they weren’t as collectible as a Cooper. This one was local and it seemed worth looking at.” He set out to see the car and was pleased with what he found. It was a very standard 1970 998 Clubman with only four previous owners, two from the same family. It had undergone a restoration in 2004 and only had 50,000 miles on the clock. Malcolm won the bid for an extremely reasonable £3000. He later discovered that the Mini belonged to the neighbour of a former colleague who had been bidding on it at the same time.

The previous owner had carried out a serious overhaul in 2004. At that time, at only 34 years old and relatively untouched, it had required new Heritage panels for both front wings, a scuttle panel and front valance. Doors were replaced with second-hand Mini doors as they had rusted through and were beyond repair. Brightwork, interior and other trim had been replaced with either second-hand or Newton Commercial products. Malcolm was pleased to find that it had also been converted to dry suspension at some point during its life. UK Clubmans were factory-fitted with Hydrolastic suspension up until 1971. “Nowadays, with the high costs of repairing and maintaining Hydrolastic, dry suspension offers a much better set-up. When I was doing the big, bareshell rebuild in 2017 I had two front subframes available: the original Hydro one that belongs with the car and the auto one. The bottom line is that the auto one was in better condition with no damaged threads etc., so I used that. 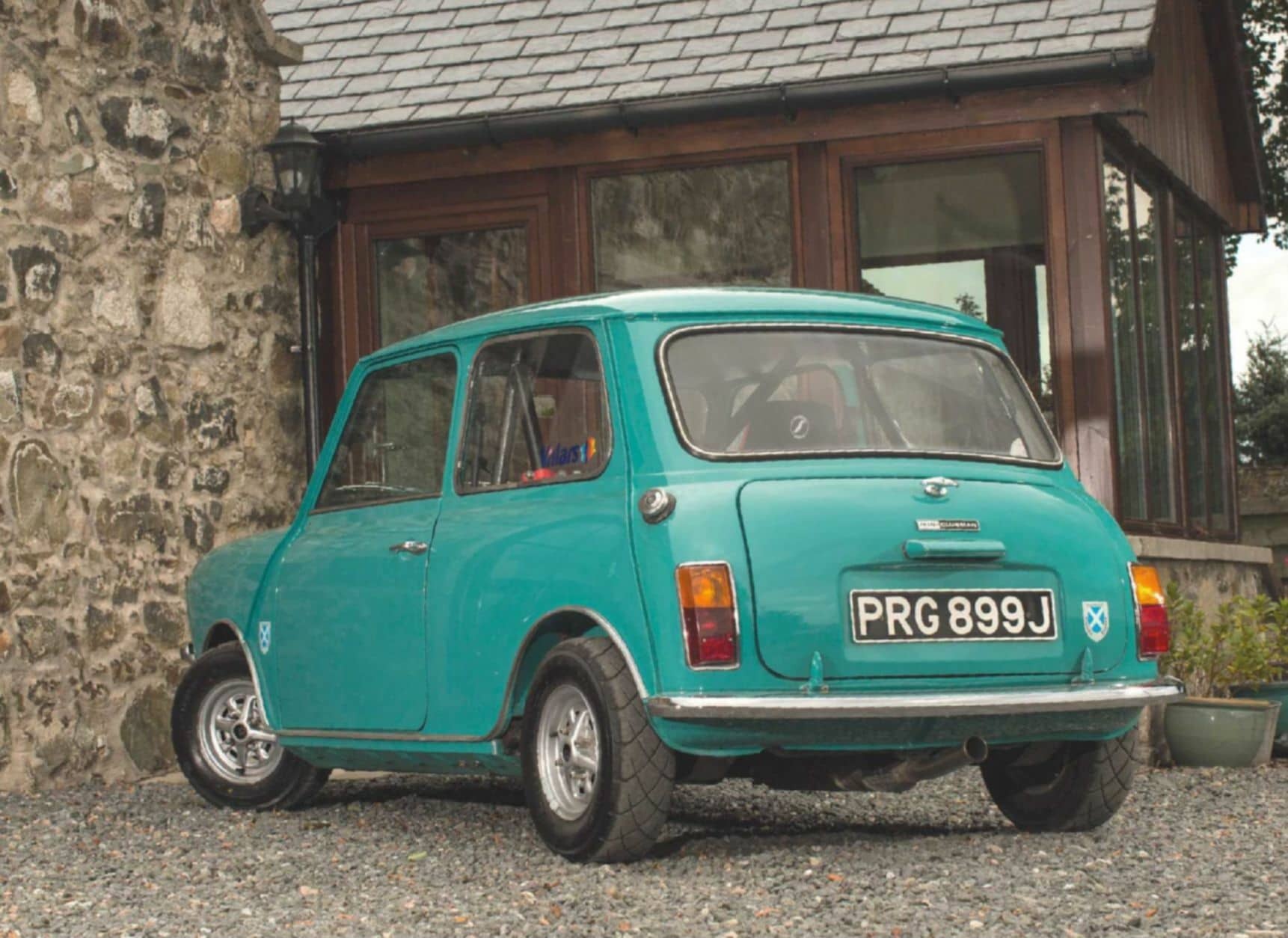 Malcolm holds an MSA (Motor Sports Association) licence and has been competing for over 30 years, mostly in hill climbs and sprints. He’s either owned or borrowed over 30 different competition cars during that time. “I was the Scottish Sprint Champion in 2000 but, over the years, I've done navigational rallying, tarmac stage rallying [fourth overall in the 1993 Scottish Tarmac Rally Championship in a 1300 Nova], forest rallying, autotests, autocross [an outright win in another 1300 Nova]. However, I'm pleased to say that my first ever trophy was at the wheel of a Mini when a friend and I won the Novice Class of a local navigational rally, in a tatty old 1275GT, in 1987.