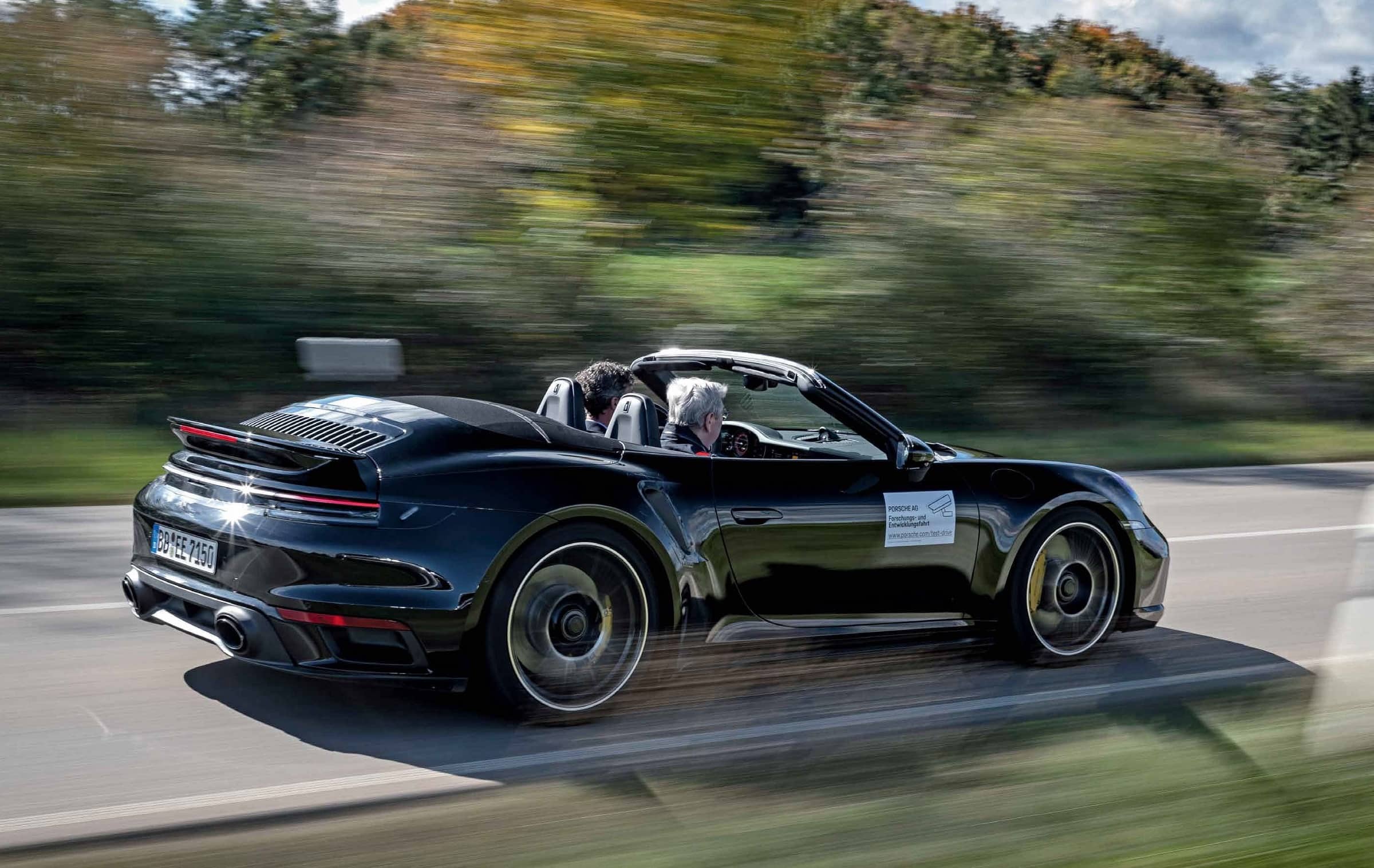 IN AN AUSSIE EXCLUSIVE, WE STRAP INTO THE FORTHCOMING 485KW PORSCHE 911 TURBO S – AND BESIDE THE MAD SCIENTIST WHO BUILT IT

Georg Kacher
ALL PRE-PRODUCTION Porsches are, as a rule, painted solid black, only casually camouflaged with black tape, and they have all-black interiors with optional soft-shell black disguise pads here and there. This monochromatic stealth car would look perfectly inconspicuous if it wasn’t for the four eyecatching, snow-white Caution! Experimental vehicle! stickers, which in Germany are mandatory in this era of battery-powered cars and potential electric shocks.

Although electrocution is not a risk when laying hands on the new top-of-the-line 992, the warning messages inadvertently distract spies from the changes made to the latest Turbo S. Most significant are the redesigned rear apron-diffuser that accommodates the trademark four trapezoid endpipes; flush, multi-spoke lightweight wheels; bigger and slipperier side air intakes; slimmer and wider DRLs; restyled bumpers and a more elaborate ground-effect wingwork.

The 992 was developed under August Achleitner and his team, and contrary to popular expectations, the only battery installed in the new 911 Turbo drives the starter motor and supports the alternator – there is no mild hybrid, let alone a boost-effect 48V system. 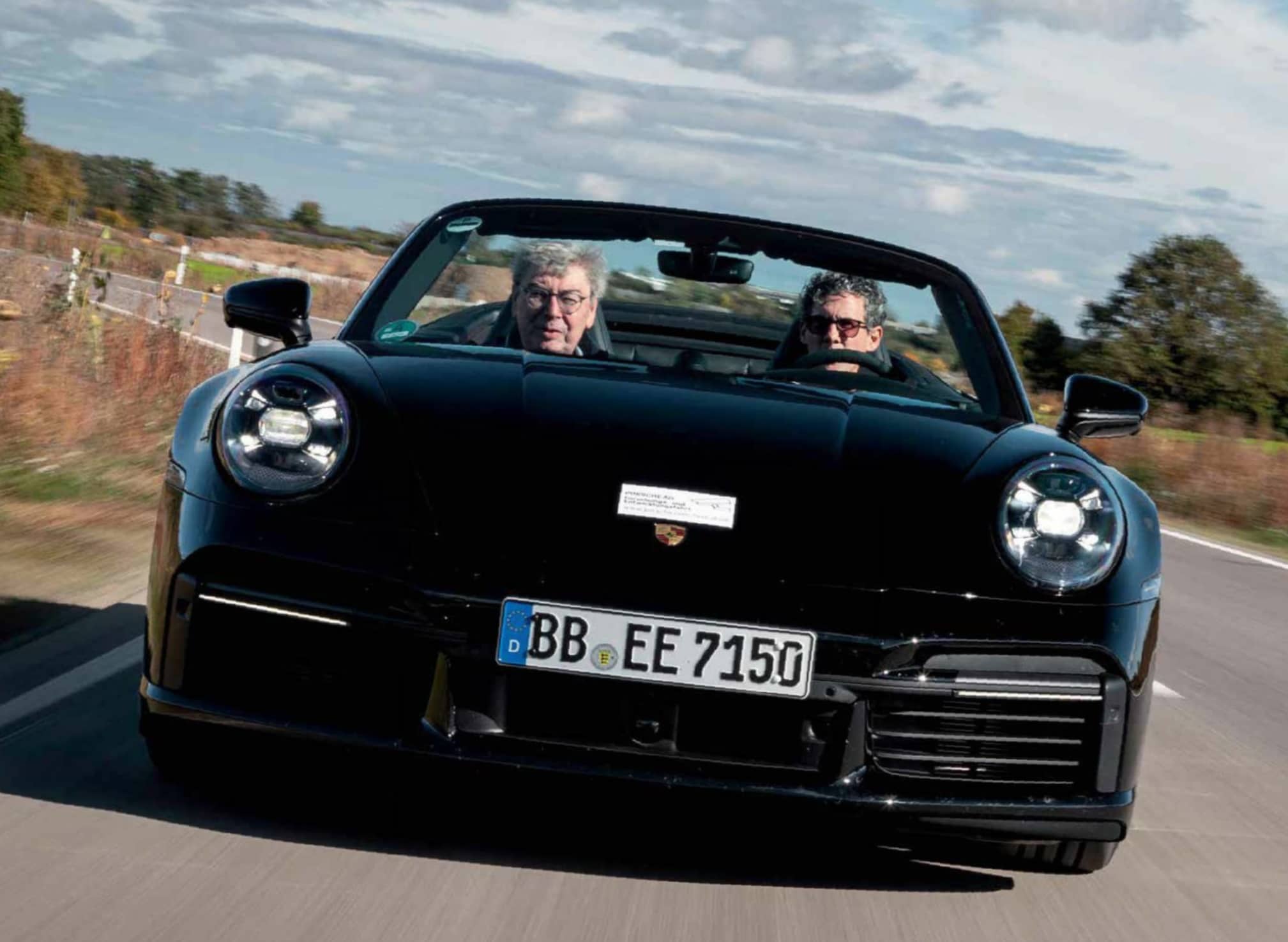 “The benefits of partial electrification are marginal compared to the complex weight, packaging and cost issues,” Achleitner tells MOTOR. “Weight in particular is obviously critical for every sports car. Unfortunately you cannot de-content (remove features to reduce weight) a Turbo like a GT3 because the clientele would not tolerate it. Instead, the car gained a few extra kilos with additional convenience items and the new eight-speed PDK transmission. You would not believe the damage an extra set of gears does to the overall calorie count...”

Unlike early Turbos, decried as ‘widow-makers’, more recent versions have been heavily bespoilered 911 iterations targeting the rich. The 996 and 997 Turbos in particular were known for straddling the boundary between sanitised faultlessness and budding boredom, were comprehensively kitted out with sound-deadening material and, starting with the 997 Turbo S, were no longer available with a manual gearbox.

“In this case, there wasn’t any real need for significant last-minute adjustments,” says new 911 product chief FrankSteffen Walliser from the driver’s seat of our pre-release test car, “but I still feel we have steered the 992 Turbo fractionally more in a back-to-the-roots direction. To do so, even little things helped: stiffer joints, harder rubber bushings, tighter attachment points, modified spring and damper calibrations. What we definitely refrained from is turning a nicely balanced GT into a hard-edged street fighter.”