RANGE-TOPPING 1 SERIES TAKES ON AN A-CLASS SO OVER-DRUGGED IT EVEN ECLIPSES THE V8-ENGINED C63 AMG. WELCOME TO THE NEW AUTOMOTIVE WORLD ORDER

Georg Kacher
THIS IS NOT your classic winner-takes-all comparison. When you pit 225kW against 310kW, performance cannot be the sole decider, or this story would end right here. What we’re trying to find out instead is how the most potent compact hatchbacks available from BMW and Mercedes fare when you pull out all the stops. To do so, numbers took second priority to subjective impressions. The stopwatch was replaced by the body clock, the shameful filling station receipts were binned with an impish grin, and our driving licences were left soaking overnight in holy water. After a longish wait, it’s at last crunch time for the Mercedes-AMG A45 S on home turf, with a blue BMW M135i looming large in the rear-view mirror.

The Benz welcomes the front seat passengers with one-sizefits-all bucket seats. To set the tone for the day, we dial in Sport Plus and summon the gaudy Supersport display with its big fat gear indicator and speedometer circled by a rainbow rev counter that in turn is flanked by two busy bar graphs. AMG has also included a Race Start function, but only if you lift your left foot off the brake within three seconds while keeping the right hoof planted, and easily drowning every rump-ta-ta band is the blaring Real Performance Sound processor.

But all this ballyhoo is merely a prelude to the great dogand-pony show known as Drift Mode, which can only be locked in with the transmission in manual, the drive program in Race and ESP switched off – and then you must pull both shift paddles simultaneously, then confirm powerslide mode by a quick flick of the Up paddle.

Sitting alongside the matte-grey Benz, waiting for the thumbs up and impatiently wow-wowing against the limiter, is the M135i, also with one twin-scroll turbo, four cylinders, eight gears and four driven wheels. It delivers 450Nm through its automatic transmission – versus 500Nm and dual-clutch in the Benz – though in launch control mode the BMW’s maximum torque is also available in first and second gears. Part of the upgraded xDrive system is a Torsen diff lock that keeps the front wheels in check. 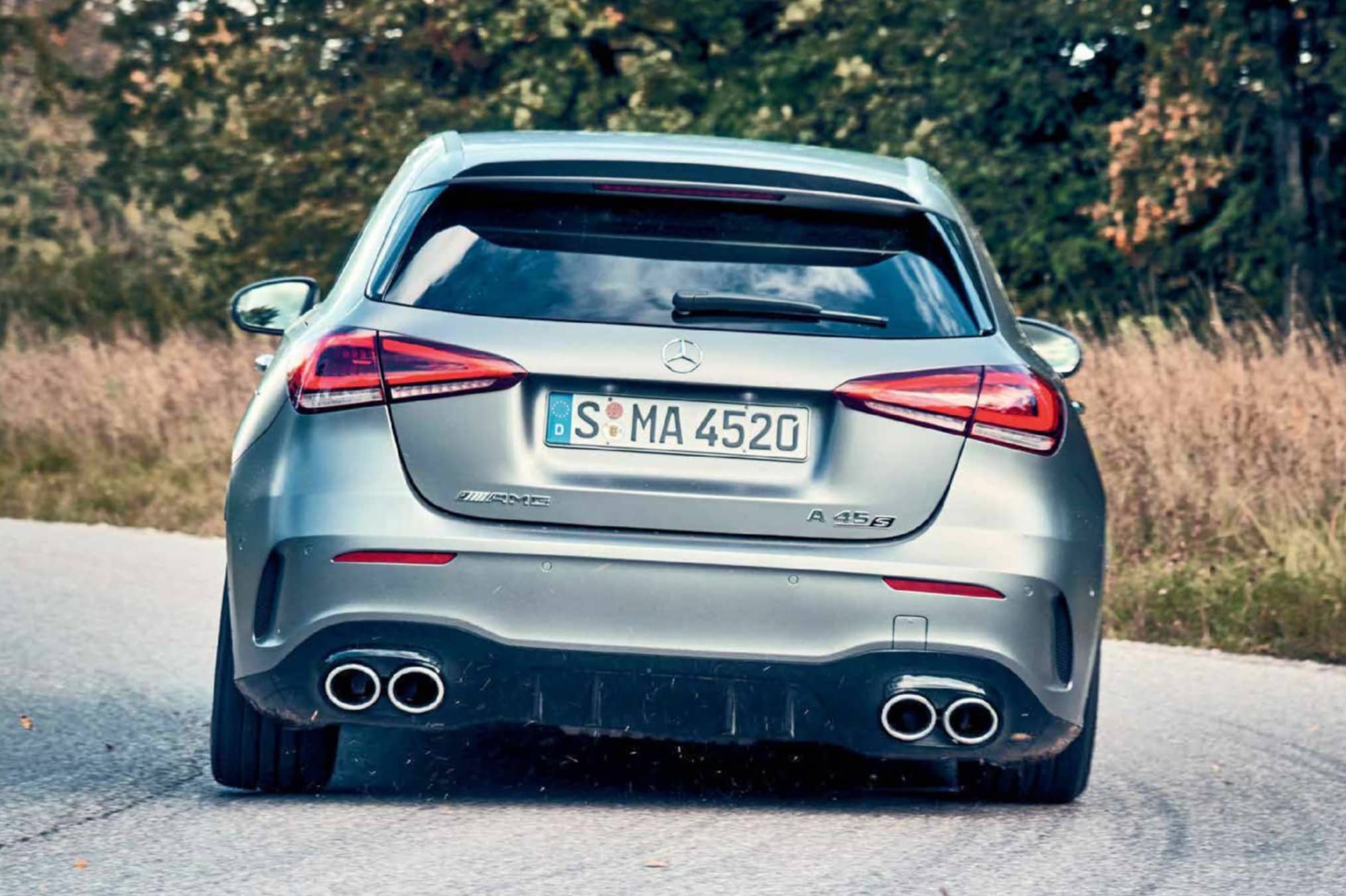 We would also like you to welcome an all-new and highly effective electronic feature dubbed ‘actuator contiguous wheel slip limitation’, or ARB. Borrowed from the i3 (yes, really), ARB controls wheelspin inside the black box, and bypassing the DSC module speeds up the felt response time tenfold, thereby nipping understeer in the bud. Sounds unreal and feels unreal. Although the intervention of traction control can be reduced and eliminated in two steps, the xDrive system retains its preset 50:50 torque split at all times rather than ever allowing the rear wheels to pick up the lion’s share of the momentum. 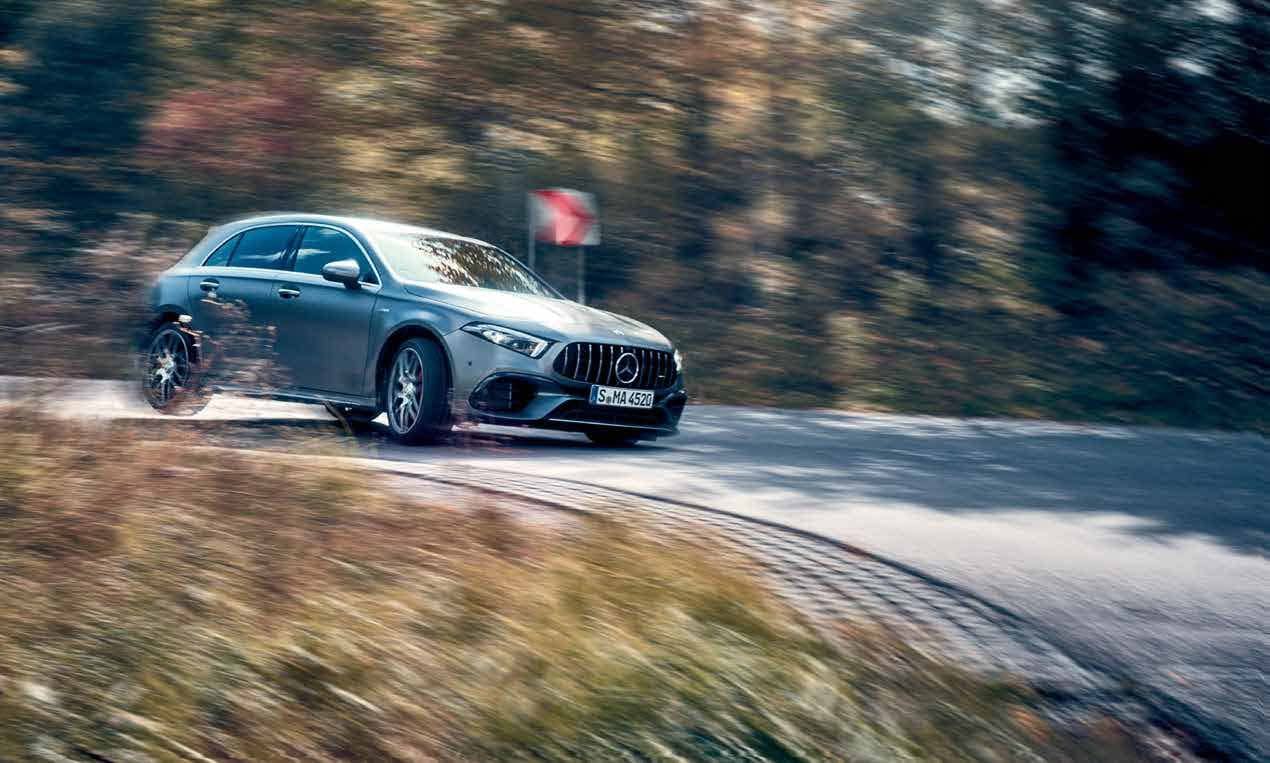 The BMW is marginally quicker off the mark, but its first gear is shorter, and as soon as the AMG engine has picked up enough revs, the kick-in-the-butt DCT and fast-growing extra momentum urges the A45 S forward. Just for the record, the 0-100km/h duel sees Swabia beat Bavaria 3.9 to 4.8sec. As we expected, that’s an impressive victory for the Benz, which throws in a bit of drama for good measure – like a shrill take-off chirp, an increasingly upbeat soundtrack that changes from angry to indignant around 4000rpm, an artificially induced lift-off blat-blat, and the reluctance to shift up into third just in case the fun is not yet over.