Has The Mercedes-amg A35 Really Got What It Takes? 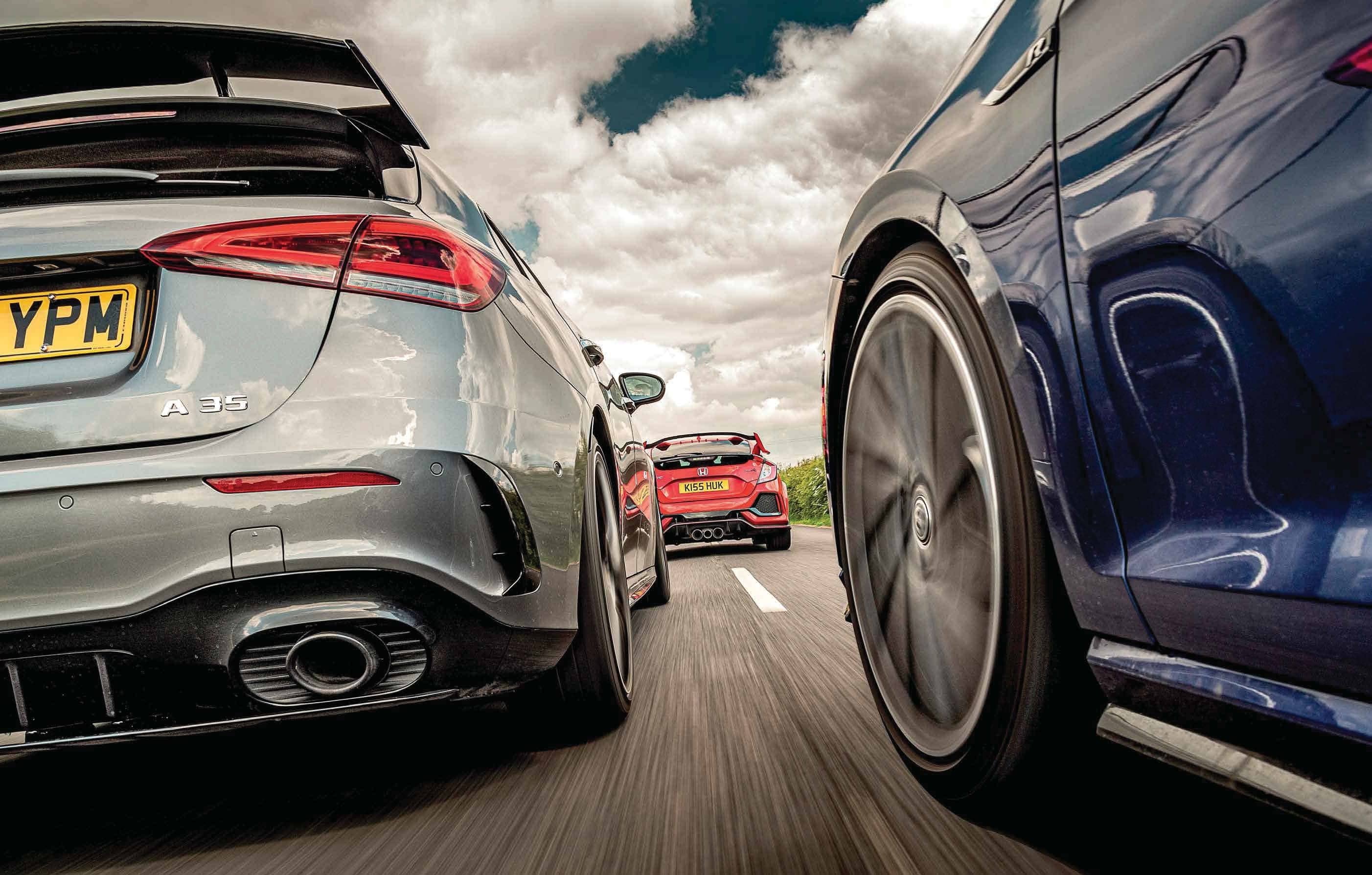 The makers of C63 want in on Honda Civic Type R and VW Golf R Turf. But has the Mercedes-AMG A35 really got what it takes?

Like the back of my hand. If I’ve been down this road once, I’ve been down it a thousand times, albeit on a motorcycle – flowing between the verges, climbing forward over the front wheel to keep it down over the lumps, flies popping on my visor like fat rain in a summer storm. Hard work, then? Of the very best kind, the bike always accelerating, braking or turning, the delicate but critical issue of just how much you can ask of its two tyres all-consuming.

The same road in the new Mercedes-AMG A35 – due on sale here around October – is a piece of cake, the AMG’s ludicrous traction, power and poise making a mockery of any caution or sensitivity you may deem appropriate.

Jumping out of the Honda Civic Type R into the A35, you first curse the seats. They look the business, with cool little slots at the back of your neck ready for a race harness, but even on their lowest setting the seats are set so high you can spot swimmers in difficulty off Bondi Beach, while lateral support is so lacking you realise the steering wheel’s as much for hanging onto as for dictating the mega-hatch’s trajectory.

You approach the first couple of corners gingerly, thinking you might need to manage a little understeer if your approach is too hot, or be in some way restrained about the way you re-introduce the turbo four’s 225kW of power or 400Nm of torque (effectively always on, given peak twist chimes in from just 3000rpm). But it’s soon clear that the A35 doesn’t require any such niceties. Turn stability control off, ramp up the drive mode to Sport Plus, not least for the silly barrage of noise that now pours from the exhausts, and just launch the AMG at the road ahead – nothing will go wrong, promise.

The front axle is pretty faithful, hanging on even when you’re convinced you’re braking too hard to turn (explained in part by the sheer acreage of rubber our A35 puts on the road, running on optional 19s wearing 235/35 Pirellis), and the mid-corner phase barely exists, so early can you get back on the power.

Just as well really, since hanging on through long, fast corners feels a little like doing so in a (fast, very smart) van, the weight distribution and driving position feeling too high, and the physics worryingly remote as a result. But there’s no doubting the grip, nor the fact that the Civic – laudably light, pure and racerlike though it may be – just can’t keep up. The Honda’s there on the brakes and on turn-in, sitting inches off the Merc’s rotund little bottom like we’re towing it, but every time a bend eases into a straight the AMG pulls a car length or two, not because it’s faster – it isn’t, with the lighter, more powerful Honda boasting a 164kW-per-tonne power-to-weight ratio versus the Merc’s significantly less low-carb 145kW-per-tonne – but because all-wheel drive means there’s no need to display even a shred of patience. Jump on the throttle really abruptly, really early, and you’ll swear the power actually helps you finish the turn. The reality is the Honda pilot’s still busy balancing wheel and pedal, and trying desperately hard not to render one useless with excessively greedy demands of the other.

It’s fast, then, this A35. And blessed with a powertrain and chassis so capable that the speed it serves up is almost worryingly easy to access. It’s also desperately grownup for a hatchback: grown-up looks (dive planes and bootlid spoiler excepted), grown-up cabin ambience and refinement (the Honda feels like a Caterham in contrast), and grown-up price. How much? The estimated $68,000 price is well north of the VW Golf R ($57,190), the car the AMG so slavishly mirrors in concept, ethos and engineering, let alone the Civic Type R ($51,990 in manual-only form).

Big money, then, and a problem if the car doesn’t feel suitably expensive. Does it? Not according to one staffer. “Tinny, feels cheap, and the engine sounds like a diesel – it’s not a proper AMG, is it?” says Mal from the art department. Ouch.

Now, comparing the A35 with the bigger C63 and E63 AMGs is as dangerous as it is nonsensical, but you can see where he’s coming from. The leather feels like no cows were harmed in its making, the engine never sounds anywhere near as good as it should, and the weird shudder at idle is unbecoming of such a premium product.

But there’s also much to admire here, and to gaze upon while nodding sagely as you appreciate that much of your cash wasn’t simply pocketed as clean, uncomplicated profit.

The infotainment displays are gobsmackingly beautiful, Degas to the Honda’s Etch A Sketch, and Merc’s twin thumb based wheel controls came easily to this child of the Nintendo generation. The rest of the infotainment might be initially intimidating (those two thumb controls, plus a touchpad, voice control and a 10.25-inch touchscreen, the latter part of the Premium Plus upgrade), but you’re soon fluently switching stations, reconfiguring the driver’s display to your preference and disabling the annoying lane-keep assist.