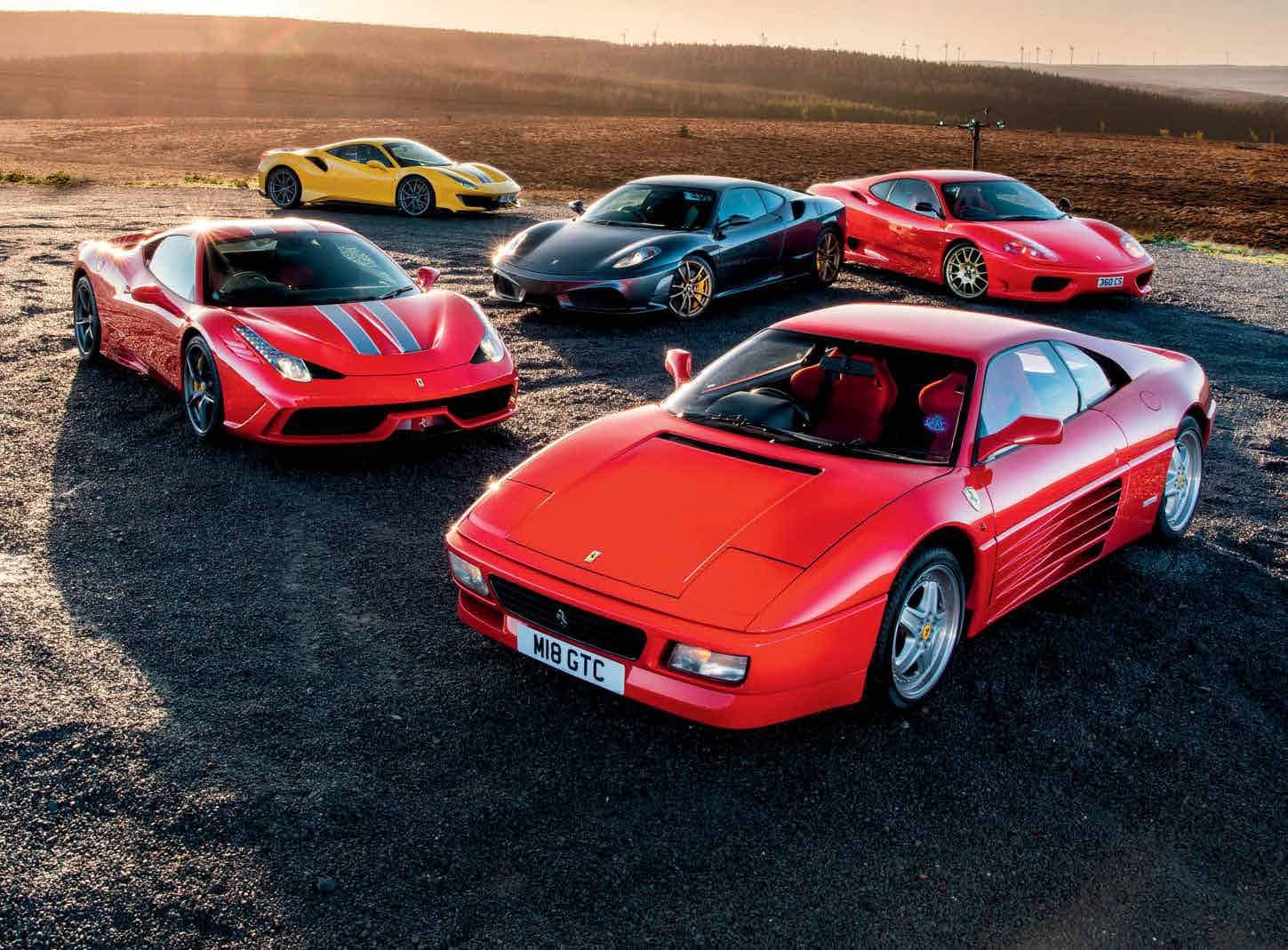 John Barker
TOP OF THE LIST of things I don’t want to hear at 4.15am is my alarm clock. Today, a very close second is the heavy patter of raindrops. That was emphatically not in the forecast. Judging by the demeanour of our guesthouse owner, I’m guessing that a new entry at the top of her own list is the high-idle drone of five flatplane-crank V8s warming up at 5am. Still, one person’s cacophony is another’s amazing, laugh-out-loud, close-harmony quintet.

A gentle, warming trundle through the sleeping town pops us out onto the smooth, glistening sweep of a bypass. In the darkness, I’m tracking the glow of four pairs of round tail-lights, a constant of Ferrari’s mid-engined V8 model line – with the exception of the car I’m driving, a 348. This is no regular 348, though, because this is no gathering of regular V8 Ferraris.

Yowling along ahead are Ferrari’s feistiest and most focused production V8s – the 360 Challenge Stradale, 430 Scuderia, 458 Speciale and 488 Pista – and making up this full house of Maranello’s ‘special series’ V8s is the car I’m driving, the rarest of them all, the 348 GT Competizione. Just 50 were built and this is one of only eight right-hand-drive examples. 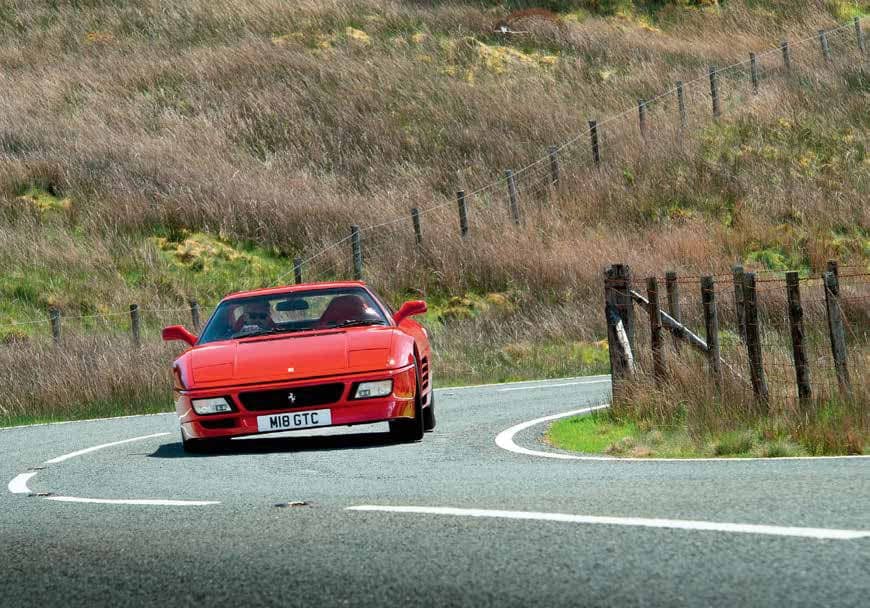 So here we are, heading towards Denbigh in North Wales, in the UK, on shiny, black, empty roads. At least it has stopped raining. There are even tantalising glimmers of brightness in the dark sky, but as we drive further and climb higher, the temperature drops. Soon there’s snow on the hills around us, bright in the headlamps. Happily, dropping down the other side, the snow vanishes and, almost miraculously, the clouds break as we approach our photo location and – ta-da! – we get a sunrise. Relief all round. 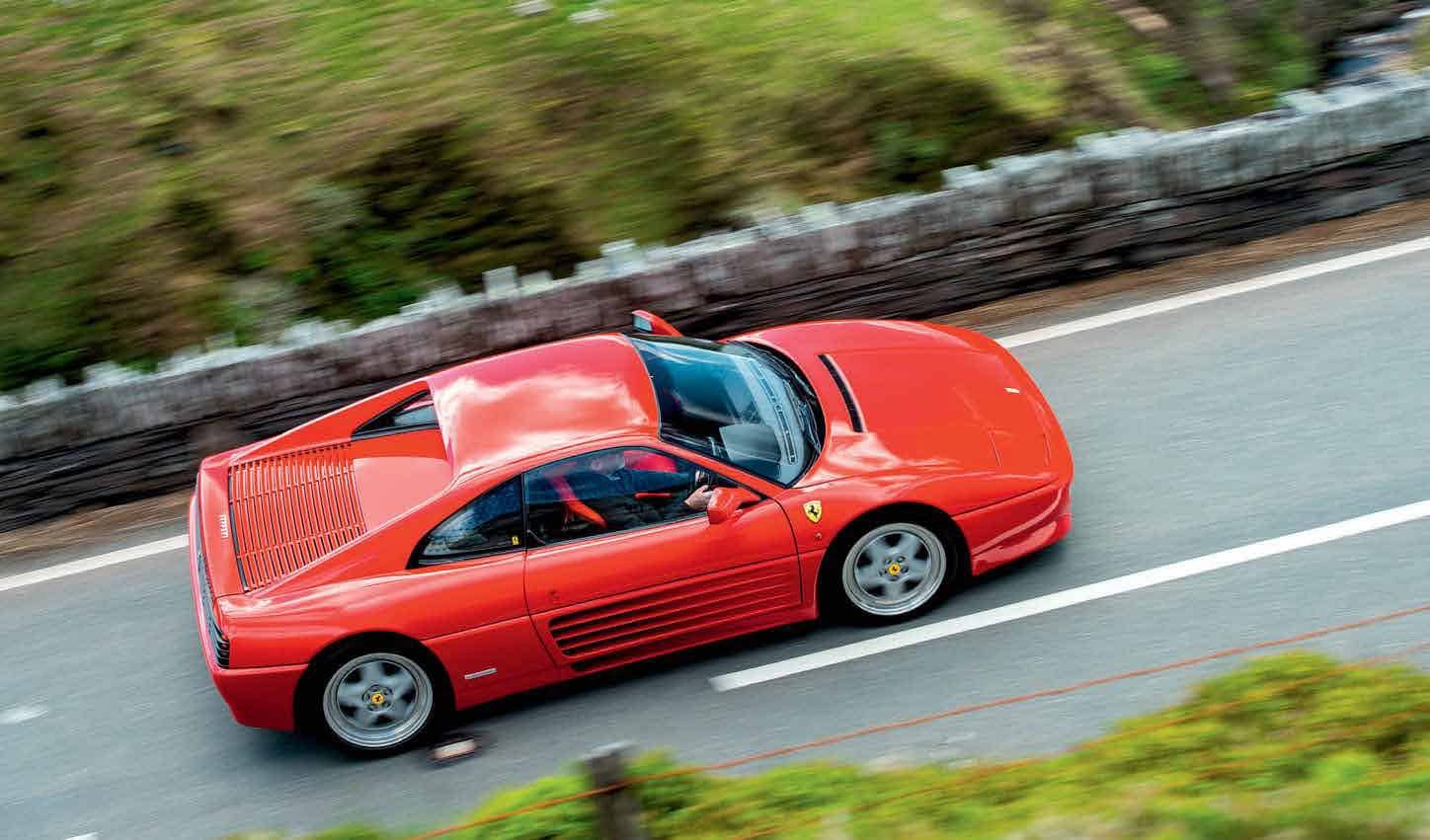 I MUST CONFESS the 348 GT Competizione wasn’t a car I’d been hankering to drive. How foolish of me. The GTC isn’t like other 348s; it doesn’t feel – and especially handle – like other 348s. Where the road dips and swerves invitingly, the GTC meets the challenge with poise to spare.

I’d never seen a GTC in the metal before collecting this immaculate example. It has a more purposeful stance than the standard model thanks to split-rim Speedlines, which are wider and an inch bigger in diameter. They wear plump Pirelli P Zeros and fill the arches so much better. Swing open the lightweight carbon-skinned door and you see carbon-shelled F40 bucket seats. More carbon-kevlar is used for the front and rear bumpers and contributes to a claimed weight saving of almost 200kg, for a dry weight of 1180kg. This seemed rather optimistic, and when we popped it on the scales with half a tank of fuel, it came in at close to 1380kg. Still, there’s more to the GTC than weight reduction, and it drives beautifully.

Slot yourself into the driver’s bucket and the surroundings are familiar 348; all the regular fixtures and fittings are present, including carpets, door casings and Veglia dials. Compared with the others, it’s a small car, a feeling enhanced by the low scuttle and slightly raised driving position.

Plug the USB-like immobiliser tag into the steering column, hear the beep, twist the key and from over your shoulder comes a familiar, smooth, plain engine note. The GTC’s 3.4-litre V8 has the stock 239kW and, despite a different exhaust, initially doesn’t sound very different from stock either. Engagement is guaranteed, though, because sprouting from the open gate on the centre console is a tall gear lever topped with a shiny chrome ball. 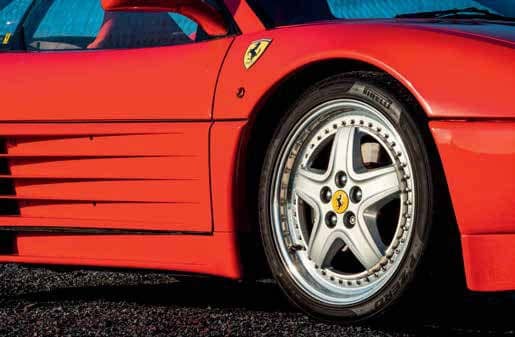 The GTC is the only manual car here and is somewhat resistant to selecting second when cold. Adding to the challenge, initial throttle travel is rather sticky and the pedals are offset. Right away, though, the way it drives impresses; the ride is smooth and calm, though the sharp retort over cats’ eyes suggests it’s underpinned by some firm control.

With everything thoroughly warmed, the engine is an absolute gem. It spins up so sweetly and so eagerly, and the delivery and note build to a zingy, rewarding top end. Shorter gearing certainly helps, and the gearshift is snappy and satisfying, but unquestionably the stand-out feature is its dynamics. It never seems to put a wheel wrong, even at a good pace across challenging roads. Crucially, there’s absolutely no suggestion that the back end is going to be an issue.

The unassisted steering is full of feedback and, although it becomes rather vague around the centre at speed, the GTC is always wonderfully accurate once guided into curves. Grip is strong, but it’s the damping that’s really special, managing to be relaxed for comfort but catching the car effortlessly through tricky sequences for seemingly undefeatable composure; you rarely feel the mid-engined mass. The GTC isn’t just the best 348 I’ve driven, it’s one of the best mid-engined cars of its era.

THE STEP TO the 360 Challenge Stradale is a big one for a few reasons, the first being that there was no stripped-down, toned-up version of the F355 that separates them. The second is that Ferrari completely reinvented the V8 model line with the 360 Modena in 1999, adopting aluminium monocoque construction and allowing the wind tunnel to dictate the proportions more than before. 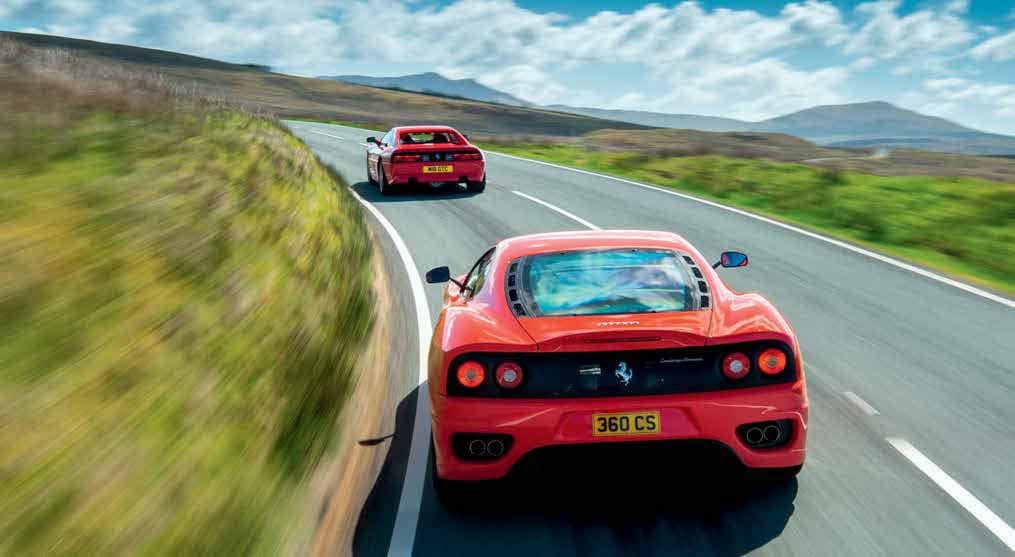 There were race versions of the 360 before the Challenge Stradale came along in 2003 and, although it appeared to use racecar parts, particularly the carbon trim, it was in fact merely inspired by them. The Stradale was a bespoke, thoroughly engineered, dedicated road racer.