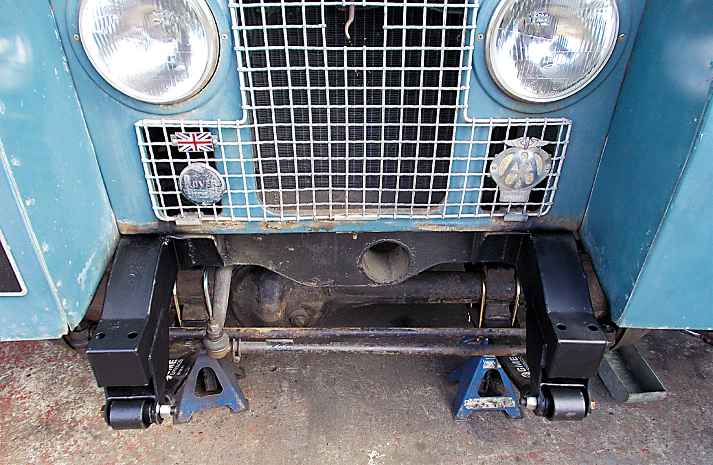 LAND Rovers are made from aluminium, so they don’t rust.”

How many times have I heard that? There is a lot of steel in the structure of any older Land Rover, be it Series, Defender, Discovery or Range Rover, and all of it will rust given just a little encouragement. Some vehicles are worse than others: I have seen 50-year-old Series IIs still on their original unpatched chassis, and Defenders half their age held together with a patchwork quilt of untidy welded plates all the way from front bumper to tow hitch. This is partly down to the quality of steel used, and partly to the environment in which the vehicle has spent most of its life. Salted roads, acidic soils and proximity to the sea all play a part in encouraging your Land Rover’s structural parts to revert to the iron oxide from which they were formed.

There are a few things you can do to slow the rusting process. Probably the most useful is to make sure you regularly remove all the mud that builds up in the recesses of the chassis and body, using a jet wash or high-pressure hose. I have seen a fair few chassis that have rotted from the inside out due to mud and sand accumulating in the main rails: cleaning this area is not easy but worth doing once a year and could save you some large repair bills. Treating the chassis inside and out with rust inhibitor (most commonly wax-based) will help limit the spread of the rot. You will not stop steel from rusting altogether, but you can slow the process down to the point where it no longer presents a threat to your Land Rover’s survival.

Most of the vehicles I see have had no attempt made to stop the rot. A few have had black underseal sprayed all over the chassis on top of rust, which just makes the rust harder to see but does little if anything to slow its progress. “Repairs” tend to consist of welding a patch of thin bodyshop steel over the rusted area. I refer to this stuff as “biscuit tin” – it is typically under 1mm thick, whereas Land Rover chassis rails are 2mm, and the various suspension mounting brackets a bit thicker than that. For long-term durability it is best to keep cutting back to sound metal, removing the rotted area altogether and then welding in a nice thick repair section, seam welded all round. Sticking a square of biscuit tin over the rust and splodging it with underseal is much cheaper and is usually enough to keep the MoT tester happy, but within a year or two it will need doing again.

It has been a while since I have had any major welding work come into the Norfolk Garage. I can’t say I have missed it: it is hot, dirty and hazardous work, although it can be very satisfying. But over the last couple of weeks my trusty MIG welder has been earning its keep, with a couple of very typical structural problems on older vehicles to address. First through the door was a mid-1990s Defender 110 Station Wagon which looked as though it had been used for pulling boats out of the sea. Five-door Station Wagons are lovely old beasts, but when the rot gets into the body structure they can soon start running up large repair bills for the owner. The structure is a mixture of steel and aluminium (which corrodes to white powder where the two are bolted together). The area behind the second row doors is fully exposed to road spray and grit thrown off the rear wheels, and the entire body side structure (sill, B-post and lower C-post) is fabricated as a single unit, expensive to buy and a major job to replace.