At Last –Corwen Back On Line After 51 Years! 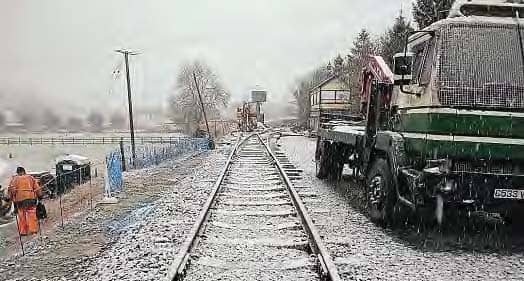 A MAJOR milestone was passed on October 17, when the Llangollen Railway’s running line into its new Corwen station was physically connected.

The mainline was linked through from the railhead to the points, giving a continuous length of rail all the way from Llangollen station to the stop block at Green Lane, Corwen for the first time since 1968 when the line was lifted.

The passenger service was withdrawn in 1965 as a result of the Beeching cuts but the line lay dormant for three years until Harold Wilson’s Government ordered the lifting of the track in 1968.

The connection marked a watershed moment in the revival project which was first conceived in 1975, but it was not until 2011 that work on building the 2½ mile extension from Carrog past the site of the closed Bonwm Halt to Corwen began. Because the former Corwen railway station site has been in private use as an Ifor Williams Trailers showroom since 1990, and the trackbed inbetween also sub-divided, a new temporary station, Corwen East, was built on the eastern side of the town.

The first stage of the project was completed in late 2014, with special trains running on October 22 to the new station for those who had contributed to the project. Regular passenger services began five days later, with an official opening train on March 1, 2015.