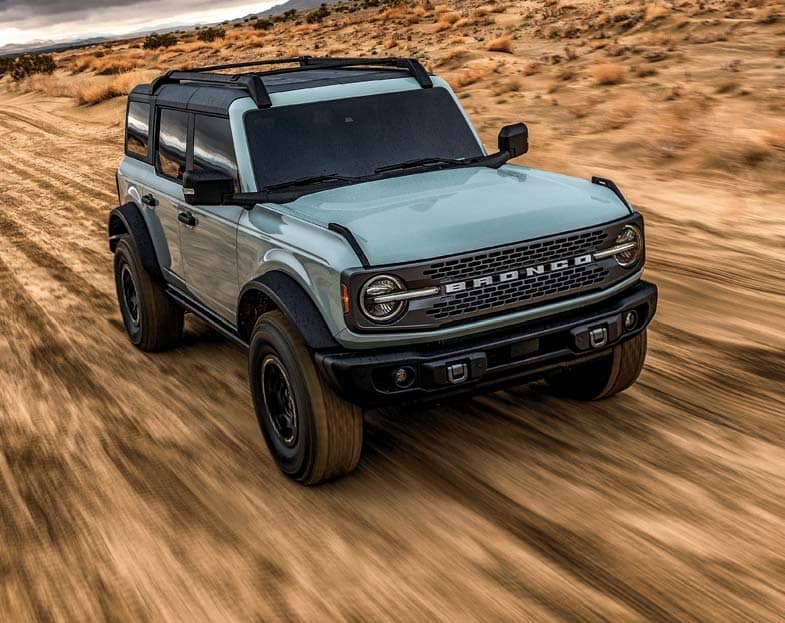 The horse is out of the barn and off to the (off-road) races! OK, bad clichés aside, the new Bronco, after years of rumor, speculation, and anticipation has been sprung, and it is every bit as impressive as we hoped it would be. So, let’s get those burning questions out of the way. Yes, it has IFS. No, it is not a replacement for the fullsize Bronco. Yes, it is a Jeep Wrangler competitor. No, you can’t have a V-8, at least not yet. Yes, it comes as a two-door and a four-door. Yes, the doors come off. Yes, there is a hardtop and soft top available. Yes, you want one. Yes, it’s cool. Yes, this is the first salvo in the Bronco family that will also include the all-new Bronco Sport and, eventually, other iterations. Ford says the Bronco was developed with the performance spirit of the Mustang and the toughness of the F-150.

With the unveiling of the Bronco, there is no doubt that Ford put the crosshairs directly on the Jeep Wrangler, as evidenced by the overall proportions and a first-ever four-door version. Ford is also creating a Bronco sub brand for the company, launching with the new two- and four-door Bronco and the small Bronco Sport. Ford engaged in a copious amount of consumer research on both products to learn about the problems and pain points of existing vehicles to come up with their own solutions. Let’s see how they did.

To get the proportions and overall feel of the Bronco just right, the design team 3D-scanned an early Bronco and used some on-brand styling cues, being careful not to let the retro vibe overpower the design. You can see the influence in the short overhangs, flat sides, open wheelwells, upright windshield, single-piece grille, round headlights, and peaked fenders. There will be three grilles offered at launch.

A bit of modernity can be seen in the frameless windows, wide stance, signature LEDs, and very cool “trail sights” at the leading edge of the fenders, which are intended to help the driver see the front of the vehicle, as well as be used as tiedowns. Ford also hid the hinges on the bodysides for simplicity, but chose to keep them exposed on the tailgate. Cowl-mounted mirrors retain rearward visibility when the doors are removed.

The Bronco’s beltline is high, while the wrap-down roofline is low, making the roof look a bit visually heavy. This was necessary to ensure there was an area big enough to house the side curtain airbags and to make the glass short enough that the windows could fully retract into the doors.

The two-door Bronco is 6.9 inches longer than the 166-inch-long two-door Wrangler and rides on a 3.6-inch-longer wheelbase (100.4 inches for the Bronco). The four-door is an inch longer than the 188.4-inch Wrangler Unlimited, but with a 2.3-inch-shorter wheelbase (116.1 inches on the Bronco). While the four-door is close in interior volume, the two-door Bronco is roomier than a Wrangler two-door.

To us, the two-door looks amazing, while the four-door isn’t quite as elegant. It looks visually heavier, and the mashup of details at the C-pillar isn’t as inspired as the rest of the vehicle. That being said, the overall design works well, and the new utility vehicle is immediately recognizable as a Bronco, without living in the past. Even the bucking horse logo gets a freshening to match the Bronco’s new duds. 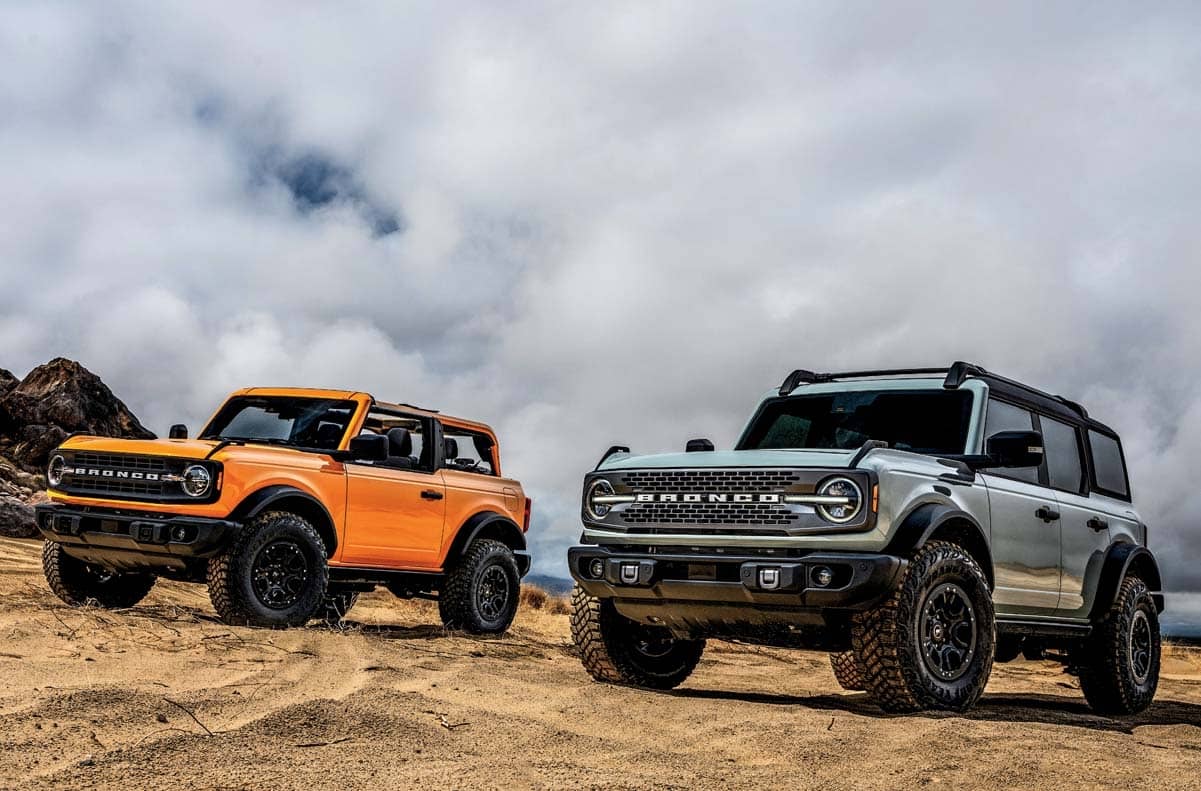 Sharing a platform with the next-generation Ford Ranger, the Bronco rides on a stout body-on-frame chassis that was designed for 35-inch tires in mind from the outset. The frame is fully boxed with high-strength steel and features an independent front suspension with forged aluminum arms and cast-iron knuckles. A Panhardbar-equipped five-link solid axle setup resides in the rear, and available coilover Bilstein reservoir shocks are employed at each corner.

The Bronco also uses a high-strength steel safety cage, but unlike the Wrangler—where the center bar on the four-door lives over the front seats—the Bronco’s perimeter cage does away with the center bar, giving backseat passengers a nearly unobstructed view of the outside world. If you look carefully, the rollcage is much lower than the windshield header, giving the roofless Broncos a cool, chopped look.

To ensure the toughness of the Bronco, engineers completed Ford’s standard 10-millionmile durability test—and then went out and did some more. Wanting to make sure the Bronco was going to not only maximize capability, but also be durable in the most demanding terrain, the engineering team took the Bronco to Johnson Valley, California, to continue development on the trails best associated with the King of the Hammers race.

One of the more curious announcements we will dig into at a later date was of the “skeletonized structure,” where exterior aluminum body panels can easily be swapped out with handtools. This could be revolutionary for the aftermarket, and we can’t wait to learn more.

All Broncos are rated to tow up to 3,500 pounds when properly equipped and have a maximum payload of 1,170 pounds on two-door models and 1,370 on four-doors, which should make the overlanding set happy. The dynamic roof load rating is 110 pounds (on non- 35-inch-tire models), with an approved static load of 450 pounds.