Much has been written about the greatness of Dan Gurney—including quite a bit here in the pages of Die Cast X. He is considered by many (and count yours truly among them) to be the greatest American racing driver of all time. He was a renaissance master whose chosen instrument was the steering wheel. He was competitive in anything he drove. He was the first driver ever to win in each of the four major racing series—Formula 1, Le Mans, Indycar and NASCAR (a feat only achieved twice since)—as well as in many “lesser” series like Trans-Am and Can-Am. He is the only man ever to score the first win for three different Formula One constructors—Porsche, Brabham, and Eagle. He was a technical pioneer, inventing the “Gurney flap”—an aerodynamic miracle device which has been used on virtually every race car for the past 45 years. He was a safety innovator—introducing the full-face helmet to F1. He was a colossus of car culture—inventing the tradition of spraying champagne in the winner’s circle, and the first-ever winner of the Cannonball Baker Sea-To-Shining-Sea Memorial Trophy Dash (better known as the Cannonball Run). Taken altogether, those achievements easily earn Dan Gurney the distinction of being the greatest American driver ever. 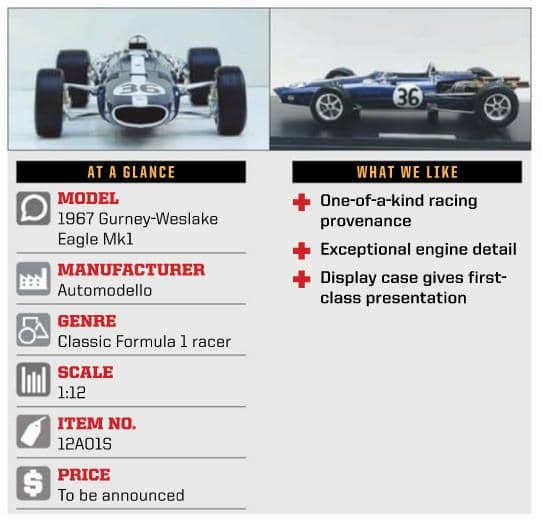 Of course, Gurney was also a tremendously successful race car builder and team owner. He founded the All American Racers (AAR) team with fellow racing legend Carroll Shelby in 1964, establishing the Eagle marque, countless versions of which have won in sports car, Indycar and F1. It came about because the Goodyear Tire & Rubber company approached Gurney and Shelby about developing a Goodyearshod Indycar to take on the dominant Firestone equipped teams. As part of the negotiation Gurney also secured Goodyear support to develop a version of the car—named the Eagle Mk1— to campaign in F1. Gurney commissioned British firm Weslake Engineering to develop a bespoke 3.0L V-12 for the F1 car, while the Indy effort would be powered by Ford. In deference to the British engine the F1 branch of the team was referred to as “Anglo American Racers.”