The Pinnacle of Pre-War Performance and Prestige

It has been famously said that history is written by the victors. In the case of American sports and luxury automobiles of the 1930s the victor was surely Cadillac; as we sit here 8+ decades later Caddy is still going strong, while brands like Duesenberg, Packard and Auburn are something of a footnote in the annals of automotive history. But that is more a reflection of the grim economics of the Depression era than of the merits of the two vehicles you see on these pages. Cadillac had the robust corporate resources of General Motors to help it weather the economic headwinds of the 1930s, while Auburn, as the junior brand in the Auburn/Cord/Duesenberg partnership, was a much smaller operation and much more reliant on the upper end of the automotive market which was especially hard hit by the Great Depression. That in no way detracts from the fundamental beauty and quality of the car itself; in fact it is a tribute to the enduring appeal of the Auburn 851 “Boattail” Speedster that it is the design many enthusiasts think of when they hear the name “Auburn” and it measures up admirably against one of Cadillac’s most prestigious nameplates of all time—the V-16.

Cadillac first launched the V-16 series in 1930 largely as a way to two one-up (well, technically, four-up!) the luxury flagship V-12 models from Packard, Daimler and others. In this era performance and speed—and the large, powerful engines that facilitated them—were usually considered aspects of luxury, so it was the large, expensive luxury car segment that pushed performance forward. Cylinder count, displacement, and horsepower became an arms race that Caddy was determined to win! Offered in more than a dozen different body styles, the 16-cylinder engine was capable of pushing lighter models to well over 100mph! One of the rarest and most prized of all the V-16s is the 1932 Sport Phaeton. Something of a hybrid between a sporty roadster and a sedan, its principal feature is a unique double cowl and windscreen that separated a pair of two-seat cabins—one forward for the driver and front seat passenger and another aft for the two rear-seat passengers. This afforded all occupants the comfort of wind protection when the Phaeton’s folding top was down. 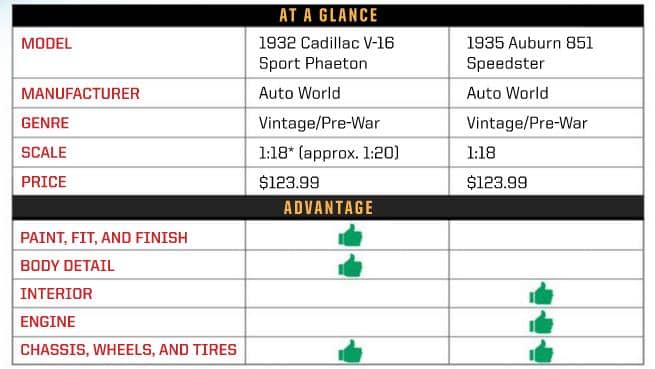 1932 was the final year for the flat vertical grille and open fenders, and the styling is elegantly traditional. The deep orange over metallic brown color scheme is unusual but classy, and the white top—which is removable—contrasts it nicely. There is even an extra white boot insert for depicting the top down. Both are hard plastic, molded with a realistic fabric weave. Even more impressive is the chrome; many of the pieces are cast metal, and even those that are plastic are plated expertly. The gold-colored beltline and the running board tread surround are the only two bits of trim that are cast into the body and painted, while the extravagant heron-in-flight hood ornament (available only from 1930-32) is spectacular. Even the wing windows are realistically hinged. 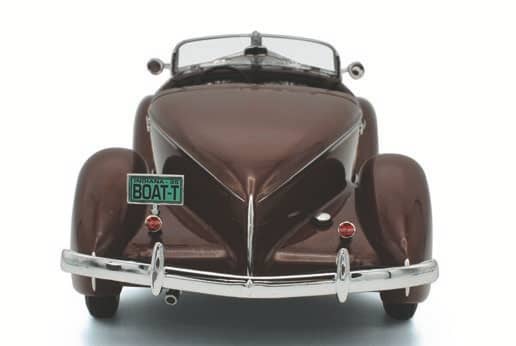