The maker of BharatBenz commercial vehicles, Daimler India Commercial Vehicles (DICV) is perhaps the only commercial vehicle manufacturer in India at the moment who has started a third shift at its Oragadam plant at Chennai. It is also expanding its network in newer regions of the country. Having chalked out a plan to grow its BharatBenz truck and bus dealer network by 10 per cent along the Golden Quadrilateral, DICV is poised to exceed the count of 250 outlets by the end of 2020. At the core of the strategy is to cut down the distance between two BharatBenz dealers by a distance of 120 km from the current 160 km. Adding over 1300 vehicle bays, the expansion of the dealer network will support the servicing of 40,000 vehicles per month. This would be in-line with the company reaching the milestone of selling one lakh CVs in India early this year. Ensuring that all its customers have easy access to its products and services, according to Rajaram Krishnamurthy, Vice President Marketing & Sales and Customer Services, DICV, the BharatBenz growth story, it is clear from the turn of events, has remained more or less intact.

Announcing that the company achieved double-digit growth in August 2020 on a year-on-year basis, Krishnamurthy expressed that the number of BharatBenz owners continue to grow every day. “We are proud to grow with them,” he added. Witnessing a significant growth in the domestic Indian market post the introduction of BSVI CVs, DICV is confident about good growth in the Indian market. Of the opinion that India is turning out to be an ideal manufacturing hub for global exports, Krishnamurthy averred that they are witnessing good traction in the used CV market. With the year 2020 showing a CV market degrowth of 45 per cent over 2019, it is unlikely to witness recovery for another three quarters at least. Hopeful of recovery starting to show from the second quarter of 2021, Krishnamurthy said that they are experiencing a good amount of changes in customer behaviour. This includes the impact on the industry of a few major negative influences, he added. Facing many downturns in the past few months, the CV industry in India is being influenced by a GDP that is expected to remain subdued for some time at least. Unemployment has been rising, and the diesel prices have gone up a good Rs.10 almost in the last few months. On the contrary, the freight rates have remained low. 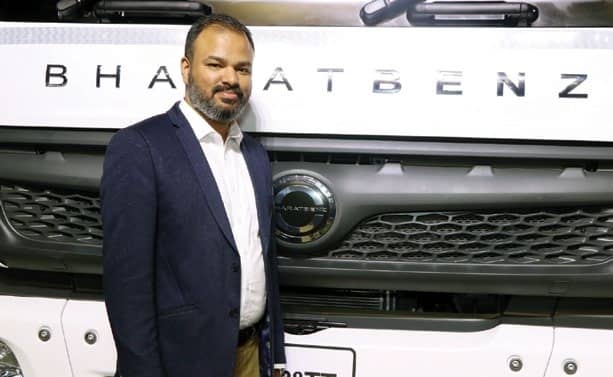 Drawing attention to the consolidation of the customer base, which includes the bigger and organised players too, Krishnamurthy informed that they are witnessing significant customer behavioural changes off-late. He pointed at the optimisation of logistics costs in terms of the demand shocks, hardly any willingness to expand capacity, and a rise in expectations in terms of the ownership experience. Stating that customers are becoming more demanding, Krishnamurthy said that DICV is in response to it, focusing on product superiority. It is connecting with its customers and stakeholders in regards to sales and service, and leveraging its digital marketing tools to ensure an enriching experience overall, he added. In India for eight years, DICV launched its BSVI truck and bus portfolio in January 2020. It announced then that it has leveraged its position as the top CV maker in the world to develop BSVI technology that would ensure lower TCO and superior reliability.