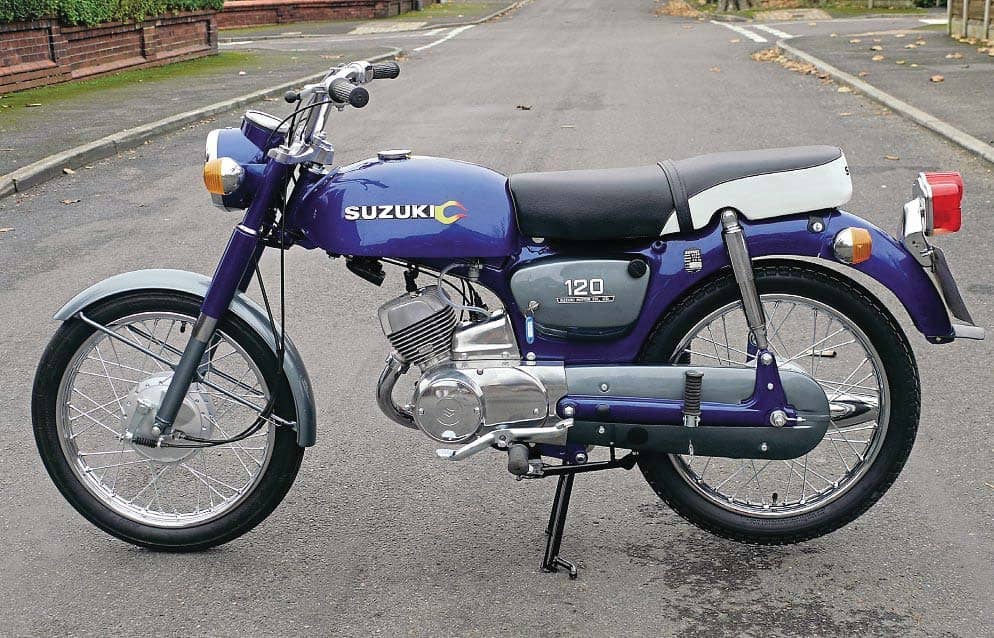 It’s part two of our Pip’s restoration of a Suzuki B120P – but things aren’t going quite as planned!

With the rear shockers re-assembled on my Bloop (see part one back in January 2020), I could crack on with the build.

I installed the center-stand with a suitably greased pivot and the foot-peg bar; next on with the swingarm and shocks. I’d carefully washed and dried the brake shoes and after replacing the speedo drive assembly into the front hub I could loosely bolt the front wheel in place, but not the rear yet.

Time for a bit of electrickery. I’d replaced the wires to the rear flashers and given all four of them a rub with some Duraglit. There’s still a bit of grot showing, but by swapping them over the shiny bit is now on top! Am I a cheapskate, or what?

Similarly, I re-hashed the wiring to the handlebar switches; this was well knackered, but the original wiring is way too long so I simply shortened it by a couple of inches and re-soldered the connections. With the switch-gear sorted I could refit the handlebar (which I had also treated to my cheapskate tech with a dose of Dura-G).

At some point in its previous life, the Bloop had a bit of a coming together, which had battered the headlamp shell. I found all the broken bits inside the shell (I love a jigsaw) so it was pretty easy to super-glue the bits back together. After Pete had worked his magic it looks just fine.

On it went, attached to the straightened out and freshly painted headlamp brackets, and in went the speedo, which fortunately had evaded capture when the bike had taken its previous clonk. The main wiring harness was in really good shape. I just had to clean it and then leave it on a radiator for an hour or so to soften it up. That way when I re-fitted it, it didn’t try to rebel and complied quite well to the correct shape and route, particularly around the steering head. I cleaned up the rear light assembly and its bracket; again the wiring was a mess, but an hour with the trusty soldering iron soon sorted that. I could then fix the rear mudguard, the indicators (take care to use the special low head bolts to fit them!), and the rear light.

After installing a temporary power source I checked out that I had the correct wires doing the correct jobs for the tail light, stop light, and both indicators; don’t want to be lighting up one of the indicators when I press the back brake! I’ve seen it happen. It’s important now to clip the wiring neatly under the rear frame section and rear mudguard, if you don’t it will chafe through on the back tyre in no time at all. I now assembled the quickly detachable rear sprocket and hub assembly to the swingarm and fitted the back wheel with its brake plate, torquearm and operating mechanism with new split pins in the appropriate places.

With a more or less complete chassis I turned to the motor. I’d stripped the top-end and all the side-covers; an hour or two with wire brushes and Scotch-Brite livened up the crankcase no end. I honed the cylinder and cleaned up the piston and all the ports. With all the gasket faces tidied up and new gaskets fitted, I installed the side-covers and built up the top end. The oil pump assembly requires a dose of care to ensure the drive is engaged correctly, but otherwise it’s all kids’ stuff. Assembling the rest of the bike is so straightforward I’m not going to even go there; patience and a few pictures taken prior to strip down are all that are needed. 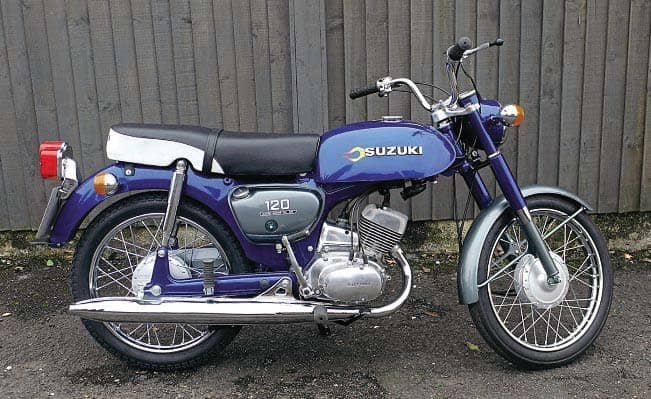